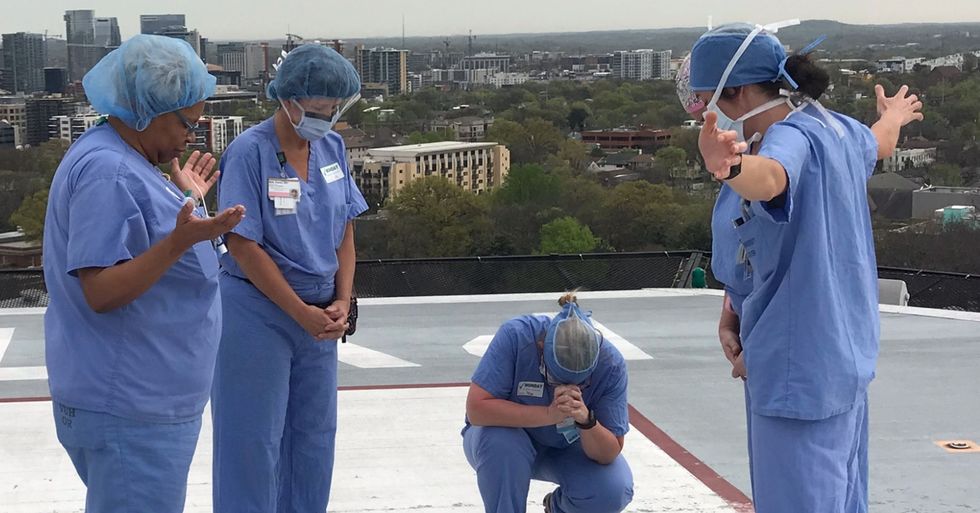 The current pandemic has left us in a state of confusion, feeling as though there's nowhere to turn.

Some people have resorted to religion to give them a sense of direction and support through this challenging time.

One heartwarming video has gone viral for the best reasons. Check it out for yourself.

This is the worst pandemic our world has faced in decades.

The rapid spread of the virus has caused global panic, and millions have been left living in lockdown.

An alarming number of people have died in the last few months...

72,596, to be precise. A further 1,312,283  people are currently infected with the virus globally, and the United States currently holds the highest number.

People have been coping in different ways...

And many have been turning to God during these difficult times.

People's faith is now stronger than ever...

I have some amazing news. I’m leaving the Ulster Hospital. I want to thank everyone for their prayers. I want to th… https://t.co/fjWYdqcCQ0
— Mark McClurg (@Mark McClurg)1585501447.0

And it has been getting many through these unimaginable times.

And even the power of prayer can make a huge difference to someone's day...

Lord Please have mercy on the nations of the world. Let this corona virus come to an end in the name of Jesus. I pr… https://t.co/4GOTqXHytX
— P.Daniel Olawande (@P.Daniel Olawande)1585576465.0

Even if they aren't strongly religious.

Some people are putting themselves in more danger than others...

People who work for local authorities and the emergency services are putting themselves on the line every single day to assist their local communities and help those in need.

Police officers have been working around the clock worldwide...

And many completely underestimate the risks that these people are putting themselves in every day.

The Yucaipa Police Department in California is, of course, stretched to its limits.

This morning we caught #YucaipaPD Deputy Wedge in the parking lot of the station. He was kneeling in front of his P… https://t.co/4eQJcfvcF3
— Yucaipa Police (@Yucaipa Police)1525205276.0

But recently, the department came across a photograph taken in 2018 of Deputy Wedge kneeling down on one knee beside his PD vehicle.

It is truly moving to see...

He was praying before his shift started, asking God to keep his partner and community safe. A co-worker happened to witness this moment and moved by the deputy’s faith and dedication to his work, they decided to snap a picture and post it on Twitter.

People have been left touched by the picture...

@YucaipaPD @sbcountysheriff May Deputy Wedge..and SO many others who serve our communities, our country, and the wo… https://t.co/5Y34QIF8Uq
— Kerry couch (@Kerry couch)1525215187.0

And are especially touched after seeing it resurface during these difficult times.

Some users online began to express their shock at the department for using a religion-based photograph.

"I support his right to pray if he wishes, but I also feel this post is inappropriate for a government agency to be making," one Facebook user wrote. As you would expect to find on the internet. Many other professions are turning to religion in this time of need...

The police force isn't the only place turning to religion in this time of uncertainty.

Hospitals around the U.S. are becoming overcrowded with patients, and health care workers on the frontlines of the pandemic are working tirelessly in the battle against it.

Social media has given us all a small glimpse into the lives of health care workers.

Many health care workers have shown the world what they’re doing when they’re not working, they’re praying.

Danny Rodriguez, senior ER tech at Jackson South Medical Center, posted the photo, saying: “This is how we started our morning today. Our team said a prayer, asking God for guidance and protection while we are at work, and to keep us and our families safe."

In Georgia, a group stood on the roof of Cartersville Hospital.

The video of the line of workers, with their palms outstretched toward the sky, has gone viral after being shared on Twitter.

A break for prayers and calmness is a small moment of reprieve for health care workers.

Most are working long, grueling shifts. A photographer in Seattle captured a group of nurses from the University of Washington system taking a yoga break between drive-thru testing for the virus.

Another trend that has surfaced is health care workers taking selfies.

#CNNTownHall: Here is a husband and wife team: both are CRNAs and are on the intubation team for COVID patients in… https://t.co/Y5tq0Wi6PE
— Pacem Bello (@Pacem Bello)1585877441.0

Showing how much strain they are under in their jobs, with their faces bruised and cut from long hours wearing protective clothing.

Several included personal stories about what it’s like on the frontlines.

Alessia Bonari, a nurse from Tuscany, Italy, took to Instagram to voice her concern, saying: “I’m afraid to go to work, I’m afraid because the mask may not adhere well to the face, or I may have accidentally touched myself with dirty gloves, or maybe the lenses do not completely cover my eyes and something may have passed."

A nurse from Iowa shared a similar experience.

Sydni Lane wrote an emotional post that went viral, saying: “I broke down and cried today. I cried of exhaustion, of defeat. Because after 4 years of being an ER nurse, I suddenly feel like I know nothing."

Angela Gleaves said: “When you have a few extra minutes at work you take the time to go to the helipad and pray."

She shared several photos of herself and some colleagues on the hospital roof.

Gleaves wrote: “We prayed over the staff in our unit as well as all of the hospital employees. We also prayed over the patients and their families during this trying time. We also prayed for all of our colleagues around the world taking care of patients. It felt good to do this with some of my amazing co-workers. We could feel God’s presence in the wind. Know that you are all covered in prayer."

The latest video to go viral is by McKenzie Gibson.

McKenzie Gibson, a @VUMChealth nurse, was on @FoxNews today & shared that she is "personally relying on Jesus to...… https://t.co/eKjuIRvxhU
— Franklin Graham (@Franklin Graham)1586098383.0

She was one of the Vanderbilt University Medical Center nurses in the photo. All we can do is hope that all the health care workers stay as safe as possible until things start to get better. Keep scrolling to see what a police officer did when he thought nobody was watching...