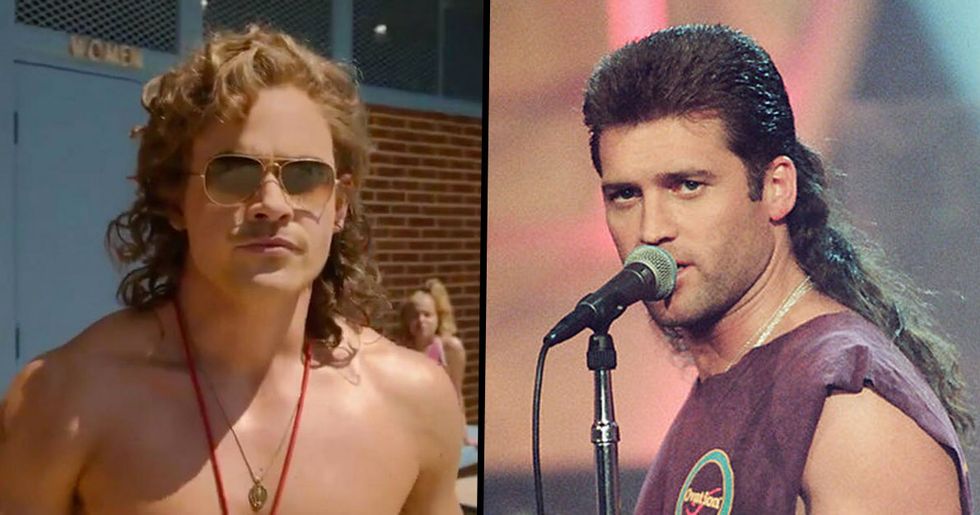 Mullets Make a Huge Comeback and Are Back in Fashion

When you think of the biggest hair-donts in history, it's likely that a mullet will be close to the top of the list. The iconic short at the front, long in the back style, which once reigned supreme has since been denigrated as one of the worst looks of all time. And, indeed, they've managed to retain a pretty bad rep since. Until now, that is.

Because, as with all fashion trends, things always come back around. And, believe it or not, the latest trend to reappear on our horizons? It's the mullet, of course. But, if you have images of 1980s power suits and poodle perms, in mind, don't fear. The new mullet is actually kinda cool - particularly the step-mullet (or "bobullet"), which is like nothing you've ever seen before.

Fashion can be a fickle mistress.

It can seem as though, as soon as you buy into a trend, it immediately becomes uncool. Staying on top of trends is basically a full-time job.

But, for a while, there seemed to be one overarching truth.

Mullets were firmly in the uncool category - and it's there they seemed set to stay.

Mullets had a pretty bad rep.

And it's not hard to see why. Business in the front, party in the back is difficult to get on board with - and often looks, quite frankly, bizarre.

But it seems like all trends are, essentially, cyclical.

And the latest comeback? Why, it's possibly the most unexpected yet - the humble mullet. Even more surprising? We don't hate it.

The mullet was an '80s classic.

One of its biggest proponents was singer-songwriter and icon, Lionel Richie, who rocked the look for many years.

The trend spread further than just the music world.

It was also a popular trend among sportsmen, soccer players in particular. Brazilian legend, Maradona, was a huge proponent of mullets.

There are some shining examples of mullets throughout history.

One of the mullet's most undeniably iconic appearances was on the head of Ziggy Stardust/David Bowie.

But, as far as these looks go, they're all pretty dated. Since the '80s, we've not really seen much of the mullet - and some think that's a real shame.

And when we did see mullets?

They were always pretty much seen as a retro, throwback look. But, now, people are appreciating the short-in-the-front, long-in-the-back style in its own right.

Some have a pretty good idea what sparked the mullet renaissance.

Stranger Things, the Netflix sci-fi smash hit show is set in the '80s - and Billy, the heartthrob lifeguard, rocks a mullet and looks damn good doing it.

There are two major proponents of the mullet comeback.

A hairstylist named Bree Ritter, who works at the Goodbye Horsegirl studio in Portland, Oregon.

Her looks are more recognizably mullet-esque - but they're still more modern than those dated images of '80s popstars.

Ritter tends to blend the shorter and long pieces successfully.

Her looks are more of a layered, shaggy cut with heavy bangs, rather than a conventional two-in-one look.

But they're still most certainly mullets.

This look is certainly '80s inspired, and yet still doesn't feel dated or like a fancy dress costume. Impressive stuff!

This look is, again, of a retro-inspired vibe, but still managed to bring the look up to 2019.

Who knew that a mullet could look so punk?

And something that makes this trend super cool?

It's a look that is equally fun on men and women - and anyone in between.

What other style has such a scope?

“It works for every gender. We are seeing it a lot on the streets," said celeb stylist, Charlie Le Mindu.

"It allows scope for all genders, non-genders and binaries," she claims. "I cut at least one or two a week. There are these modern mullets, people are coming round to the idea. It’s a fun haircut to have and it’s only going to get more popular."

The looks are twists on more classic hairdos.

"There is a sense of freedom in the fashion industry and we are in an era of playfulness. People can be who they want to be," says celebrity hairstylist, Tina Outen.

For those with lots of hair texture, a mullet style helps to thin out the volume and allows curls to really shine.

And, if you get fed up of your hair length?

"You can wear it tied back and you’ve a short, choppy haircut," offers Outen. Truly, this look is a real two-in-one. But Vacancy Project has offered an even more modern take on the look.

This is the step mullet.

It's also sometimes called a "bobullet" - a blend of a bob and a mullet. Instead of blending layers of short hair in the front and longer locks in the back, it goes for a more geometric vibe.

This look is a totally new take on the mullet - but still manages to retain its playful, fun vibe. Top marks! And if you're more interested in going for an unusual color rather than a cut, keep scrolling for some of the internet's most innovative dye jobs.