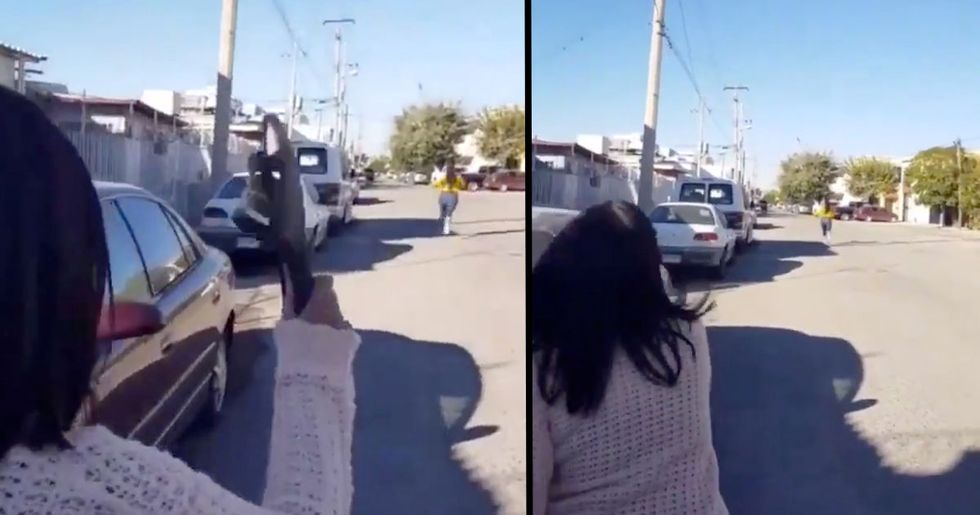 Let’s face it, parenting is often a thankless and unappreciated job. You raise your child, watching them grow from a bundle of joy into an untamed tantrum nightmare, and then you have to suffer them going through puberty on you, always saying you’re to blame for why their life is terrible.

Puberty can be rough because it also just leads to the stupidest of arguments, you find yourself hating your parents for absolutely no reason. And often parents will let it all slide, they went through puberty once, they remember how hard it could be. But some parents aren’t so understanding when it comes to quarrels with their children, and these fights can sometimes go a bit too far. In this case, having a flip-flop perfectly thrown at your head.

What are the details?

I bet from the title of this article you are wondering what the details are. Well, we've got a viral video, a family argument and a mum who could be lining up for Patriots on Sunday night.

We're not too sure, but the running back in question ended up with a mighty hit on the back of her head.

How did the mum throw the sandal so well?

No idea, but Tom Brady eat your heart out. This mum has got some arm - not only to launch the sandal that far, but also the precision. Take a bow.

Why didn’t the girl zig zag?

A question we are all still asking Rickon Stark to this day! Rookie error.

But here’s what we do know.

The video seems to helm from some undisclosed part of Mexico.

And what happens in this video?

The video is quite short, but sometimes the best things come in small quantities but this is definitely one of those times.

Well the video features an unnamed Mexican woman apparently in the middle of a debate with her teenage daughter.

Nope. We follow the woman as she chases her daughter through the house and onto a street.

But the daughter has a head start.

Obviously being younger and fuelled by emotion, the daughter runs like the Ham Burglar down the street.

But her mother isn’t letting her go that easy.

Instead of calling it a day and hoping they can resolve the issue when they have both calmed down. Instead the mother does something amazing.

You already know what it is.

Without a second thought, she removes her flip-flop and hurls it at her daughter.

From such a far range!

You would think that the flip-flop would simply fall not far from where the mother was standing.

No, instead she throws it with such force that it spirals through the air in a beautiful arch and manages to strike the running teenager directly on the head.

Don’t believe us? Check it out for yourself.

I especially like how the mother aims the flip-flop before throwing. I’m convinced she’s a past Olympian who never saw glory.

And apparently she finds the whole thing hilarious.

After the strike, the mum collapses onto a nearby car in a fit of laughter, can we say best mum ever?

But of course, some people have questioned the film.

Now, like any trending video, the film’s substance has been questioned by viewers.

A fake viral video you say? Surely not.

Believe it or not, the above video is fake. Still terrifying though.

So like most things on the Internet, people have called out the sandal video.

They've let their feelings known by replying to the tweet.

But I guess it doesn’t matter.

I’m sure this video will bring joy to a lot of people, and that’s always important.

So never underestimate the power of the CHANCLA!!

Because it knows what it’s doing!