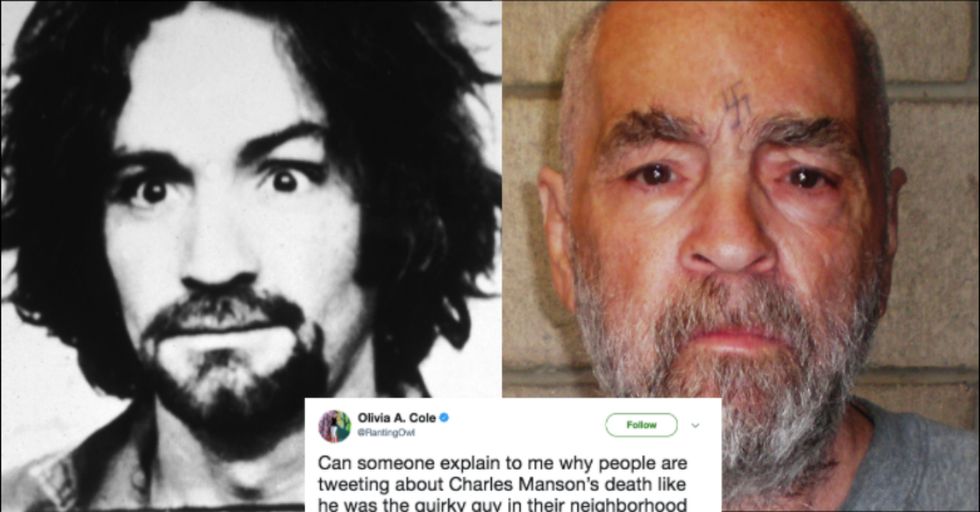 Murderous Cult Leader Charles Manson Has Died, and People Are Very Divided About It

Finally, a "celebrity" death that doesn't ruin your whole day.

Notorious cult leader and criminal Charles Manson has died at the age of 83 after spending 46 years in prison. Under Manson's orders, members of the cult-like 'Manson Family' went on a murder spree in the late 1960s. Perhaps most notably, Manson commanded his followers to kill the actress Sharon Tate (who was eight months pregnant at the time), and four other people who were at her home on August 9, 1969. The Manson Family also attempted to assassinate President Gerald R. Ford.

Manson was convicted of nine murders in 1971 and finally sentenced to life in prison in 1977.

Now, his life is over.

Back in January, Manson was admitted to the hospital for internal bleeding.

At the time, he needed surgery to repair bleeding in his intestines, but doctors deemed him too weak to undergo that procedure. They sent him back to prison, where it's simply been a waiting game.

Last week, Manson was again rushed to the hospital.

TMZ reported that it was "only a matter of time" for Manson. A source close to the situation said at the time, "It's not going to get any better for him." At 8:13 p.m. on Sunday, November 19, Manson died of "natural causes," according to prison officials.

Manson had been in prison since his arrest in December of 1969 after the Tate-LaBianca murders.

An aspiring musician, Manson had tried to enter a recording contract with record producer Terry Melcher. However, Melcher snubbed Manson. In retaliation, Manson told his followers Tex Watson, Susan Atkins, Linda Kasabian, and Patricia Krenwinkel to go to the house where Melcher used to live and kill everyone in it. But Melcher didn't live there anymore.

Instead, the house was occupied by actress Sharon Tate and her husband, film director Roman Polanski.

Polanski was not present the night of the murders, but Tate was. Also killed that night were an 18-year-old young man named Steven Parent, a celebrity hairstylist named Jay Sebring, an aspiring screenwriter Wojciech Frykowski, and Frykowski's partner Abigail Folger.

Sharon Tate was 8 months pregnant at the time of the murders. This is the last photo taken of her:

Tate pleaded with her killers to be allowed to live long enough to have her baby, even offering herself as a hostage. The Family members refused to spare her life (or that of her unborn child) and stabbed her 16 times. The next day, the same four Family members were joined by two more and Manson himself to kill supermarket executive Leno LaBianca and his wife Rosemary. Now that Manson is finally dead, the Internet is reacting in a pretty fascinating way...

First, a number of people are pointing out the irony that Manson lived to the ripe old age of 83.

Manson was actually sentenced to death in 1971 (when he was in his 30's). However, in 1972, the death penalty was ruled unconstitutional, so Manson was resentenced to life with the possibility of parole. He was denied parole a total of 12 times.

Some people are reacting to the news of Manson's death by saying "Rest in Peace." But most of Twitter has a problem with that.

"R.I.P." is a phrase reserved for people you love and respect when they pass away. Not for people with swastikas carved into their forehead.

Manson may be a fascinating psychological study, but he's by no means a hero.

Can someone explain to me why people are tweeting about Charles Manson’s death like he was the quirky guy in their… https://t.co/ljmhVjLi8w
— Olivia A. Cole (@Olivia A. Cole)1511184164.0

He is directly responsible for the deaths of several people, not to mention a period of severe unrest after the Tate murders. He is not a quirky character. He is a murderer.

Most people get it, though.

After the slew of famous people's deaths in 2016, it's kinda nice to have one that you're not exactly rooting for...but not exactly not rooting for, either. It's good to be living in a world that no longer contains Charles Manson.

This particular death is not a tragedy.

It means there's one fewer super bad guy we have to deal with. Goodness knows there are enough of them to go around.