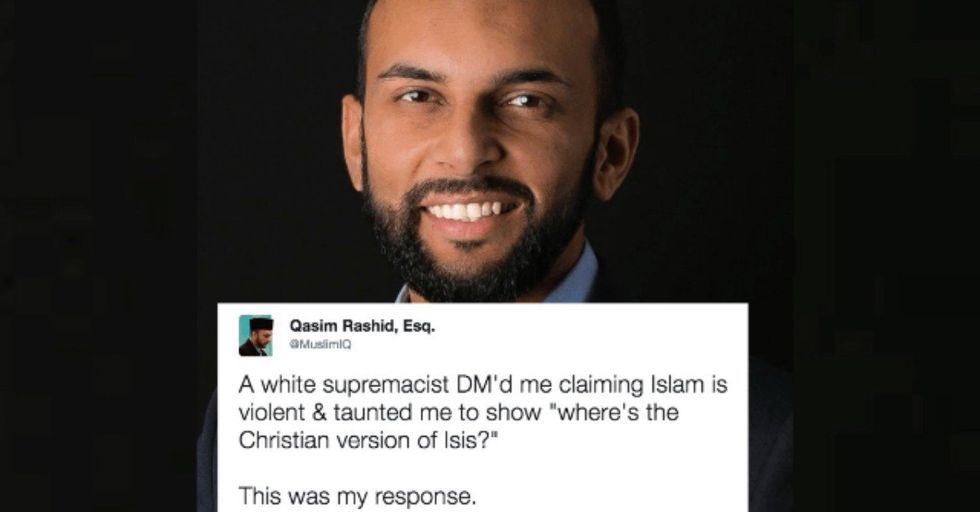 Every religion has extremists, which is to say that there's not really one particular sect that can be blamed for all the discord and ignorance that abounds. But that doesn't stop people from assuming that it all originates from the same place.

Just ask Qasim Rashid, a lawyer in Washington, DC, who gets harassed on the Internet by anti-Muslim jerks on a fairy regular basis.

Rashid recently received a message on Twitter from someone he described as a "white supremacist" in which the sender claims that there is no "Christian version of ISIS."

Rashid was not having it.

Good, because he didn't stop there.

He took his point to Twitter, where he expanded on his stance and people chimed in with their own thoughts on the matter.

He made sure not to leave anyone out.

His main point was hard to argue with though.

Rashid has clearly put some research into the subject, and not just from Wikipedia.

His rant and response quickly went viral, and though reactions have been mixed, a majority of them are positive.

People of all religions had Rashid's back.

Even people without a religion agreed with him.

Many members of the Christian community in particular sided with Rashid on this, which is nice to see.

But did the troll answer or finally just shut up?