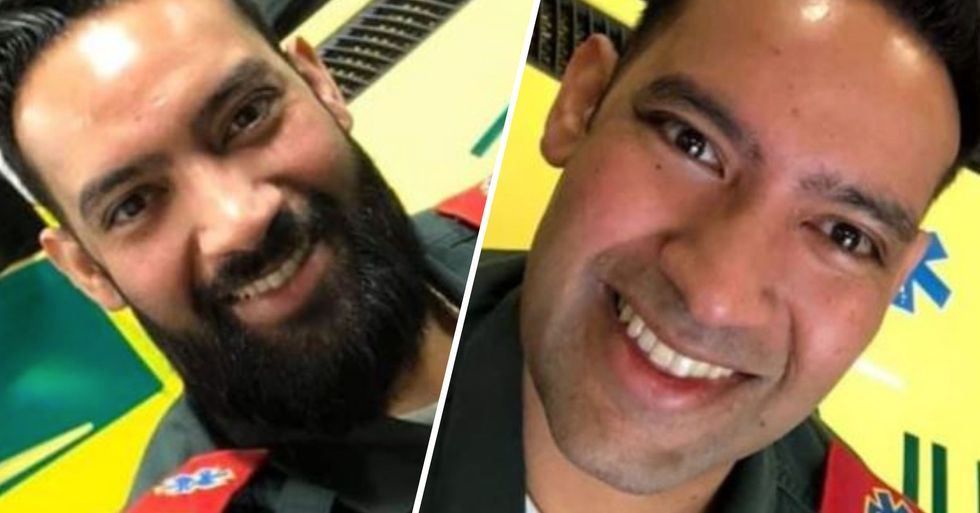 The world is changing, we're witnessing a sense of comradery unlike ever before. The shackles the virus brings, are also the very things making our communities stronger.

A Muslim paramedic has done the most heroic act to protect those around him, despite his religious teachings.

Healthcare professionals all over the world have been powering through to help those in need.

But it's heartwarming to know that it's not just those out risking their lives who are going above and beyond to help where they can. So before we get into one man's heroic gesture, let's take a look at what acts of kindness others are sharing...

It's not just celebrities donating money.

People from all over have been donating money to small businesses all over the world.

But, of course, that wasn't all. The fashion brand also announced that it is also preparing to produce medical-grade protective materials such as gowns and masks for frontline healthcare workers. WWD reports that the brand is working with its U.S. team to create 25,000 gowns and 250,000 masks.

Even Kylie Jenner has also done her bit to help.

Kylie Jenner donated the sum of $1 million dollars to help the fight. Her money will go towards providing face masks and other essential equipment.

The most recent gesture of goodwill comes from a paramedic.

Shumel Rahman has been praised for making the difficult decision to shave off his beard in order to protect those around him while on the frontline.

The thirty-nine-year-old had been growing his beard for more than a decade.

Rahman works for the North East Ambulance Service in the UK.

He ultimately decided to shave off his beard to protect his patients and colleagues who he comes into contact with on a daily basis.

Unfortunately, face masks aren't designed with beards in mind, which means they don't fit safely on the face.

He shared the challenging decision on social media, saying it "wasn’t a step [he has] taken lightly."

Funny how people are mad that the WHO said that the common masks people are using are ineffective. The CDC said the… https://t.co/OgxmifgEYY
— Jon (@Jon)1585769845.0

"After a lot of thought and much deliberation I’ve decided to shave my beard off. This is to allow the respiratory equipment to fit properly. I’ve had a beard for well over a decade and I can’t remember the last time I shaved."

He got advice from his peers to help with the decision.

"I’ve consulted many Islamic scholars and teachers, locally and nationally, sought advice from fellow Muslim healthcare professionals and very helpfully from the BIMA British Islamic Medical Association. This is was not a simple yes or no answer, however this is exceptional circumstances, totally unprecedented and a unique situation."

There's no doubt this was an extremely courageous act, and one only he could decide to do.

"I’ve shaven off my beard to protect my patients, my colleagues and my family. One of the greatest acts is to save someone’s life. This simple act may help do that."

The ambulance service congratulated Mr. Rahman for his selfless actions, saying: "One of our Muslim colleagues, Shumel, has shaved his beard off to keep himself, his patients, his family and his colleagues safe. Being clean shaven ensures face masks fit correctly. Well done Shumel."

It's nice to see people have been praising his efforts and acknowledging the sacrifice he had to make.

He has received comments from all over the UK.

One person wrote: "Well done Shumel, I don’t know you personally but I know how much this is a sacrifice from within your faith,’ another simply said: ‘A fantastic paramedic." While another commented: "Definitely not an easy decision, May Allah give you strength to fulfil your current duty and make you to grow back again."

He ended his post by urging everyone to do their part in this trying time.

He wrote: "You can save lives by staying home and protecting the NHS, letting us get on with our job."

If Shumel can make such a huge sacrifice in order to keep those around him safe, the least we can do as a country is stay home. If you're in need of cheering up, keep scrolling to see what your favourite celebs are doing to help...