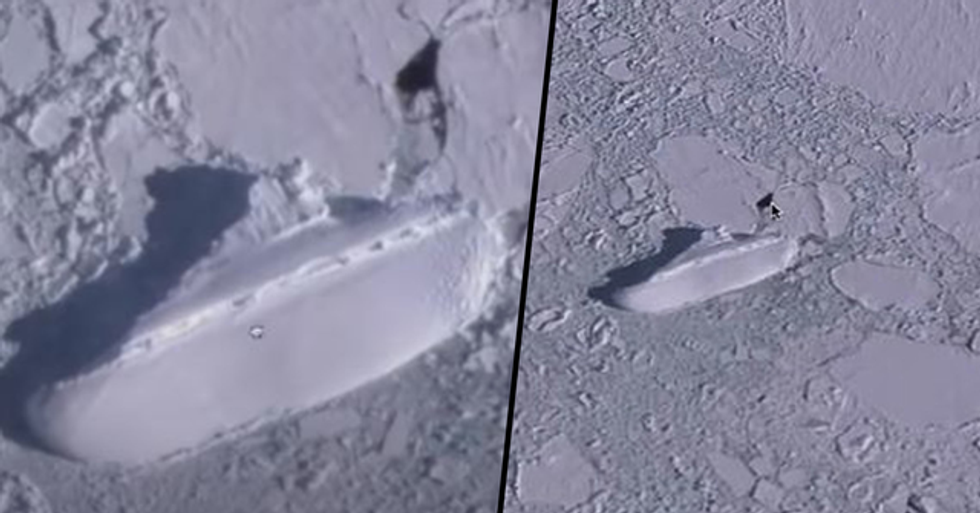 An avid Google Earth hunter stumbled across a mysterious "ice ship" over the weekend, and it has made the conspiracy theorists go wild...

Google Earth has given us the opportunity to see the world...

All from the comfort of our own homes.

Launched in 2005, the interactive map service was quick to stir up excitement amongst its users.

Because never before had we been able to see all corners of the globe from our very own computer screens.

Over the years, Google Earth has progressed in leaps and bounds...

Meaning that today, we can literally see every single location on Earth, with no need for passports or visas.

Have you ever wondered what the infamous Eiffel Tower in Paris looks like in the flesh, without the cost of those pricey airline tickets? Well, wonder no more.

Or how about the historic Pyramids of Giza in Egypt?

Yep, with Google Earth's street view option, you can marvel at these landmarks from a thousand-kilometer distance in your very own living room.

But, rather than look up the more popular tourist hot spots...

Some people use Google Earth to discover the more mysterious sides of our planet that are next to impossible to reach in real life.

As I said earlier, you can get a glimpse into almost every corner of the earth on this app...

And some stay-at-home explorers stumble upon some pretty mysterious sites on their remote travels.

And this brings us back to the whole reason we're here today.

Conspiracy theorists have been having a field day after an avid couch explorer shared his discovery when searching the vast planes of Antarctica on Google Earth.

Thanks to its hostile weather conditions and remote location, only around 45,000 people actually visit the continent every year, according to reports.

Only the most adventurous of travelers venture to the isolated continent...

So, of course, Google Earth has been a total blessing for those wanting to catch a glimpse of Antarctica's snowy landscapes.

But one particular user found something other than miles of snow and ice...

YouTuber, MrMBB333, who describes himself as an "Earth Watchman", shared his mysterious findings with his followers over the weekend.

The YouTuber directed his viewers to an iceberg off the coast of the continent...

And just south of New Zealand.

He was this searching the tiny island, seen sandwiched between Antarctica and New Zealand.

Firstly, he discussed a patch of ice that he claimed to show evidence of walls, entryways, and a place to park vehicles...

Signs of human life amongst vast nothingness, to put it shortly.

The mound took on the shape of a ship, with a line of windows, multiple decks, and chimneys.

Musing his discovery, he commented:

"You look down on it and it looks like the outline of a ship. This measures 400ft long, whatever that looks like, it looks like a ship. An ice ship if you want to call it - a 400ft yacht just sitting there off the coast of Antarctica."

It is truly remarkable.

And it has to be noted that this view of the ship from above suggests that the vessel has been tipped on its side, thus sparking the question... How on earth did it end up there?!

Admittedly, it would take a lot to tip over a vessel of that size...

So viewers were quick to speculate as to how and why the ship ended up on this tiny and isolated island.

Some people suggested that there was a shipwreck under the ice causing the formation...

While on commented that the vessel was used to "save" the lives of the rich and the powerful. "I was told a couple of years ago that there are ships built underground somewhere on [sic] upper east coast (like the ones in the movie 2012) to save the rich and powerful when canary islands get hit with massive earthquake that will take out east coast."

Someone even suggested that the long lost Noah's Ark had finally been rediscovered...

Okay, I'm not too convinced with that one. Other theories included government cover-ups, the Bermuda Triangle, and military involvement... But we may never know the true story behind the mysterious ice ship. For more wild Google Earth discoveries, keep scrolling...