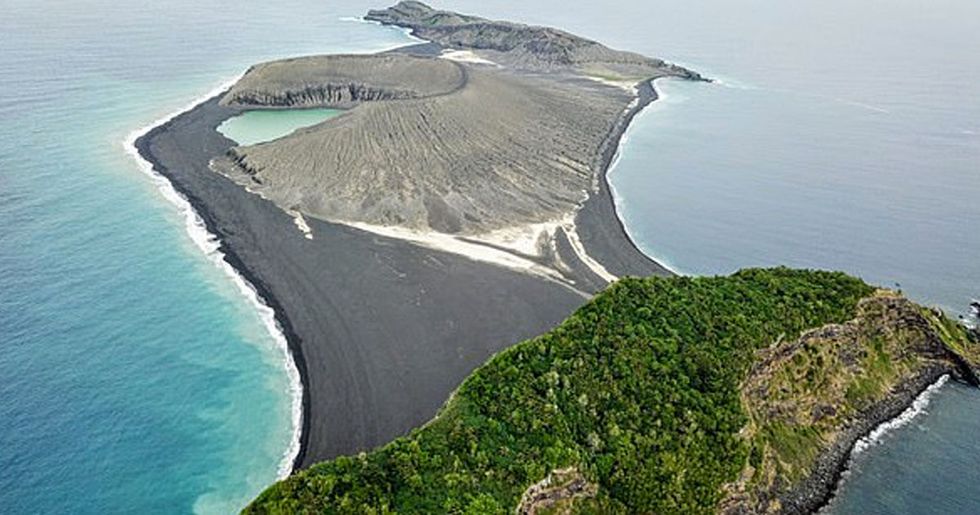 On this site we have talked many times about the strange goings-on of the world. How the planet that we call home still continues to shock and surprise us with every passing year. By exploring the deepest ocean or by investigating the deepest jungle, we soon discover new and wondrous things that only prove how amazing nature can be. Recently, the Earth gave us another surprise when a new island was discovered by NASA scientists, with the island being only one of three to have survived the ocean and its eroding waves. So who knows that will happen next.

Although the island may look ancient, you may be surprised to learn that it is only four years old.

And it erupted in the South Pacific.

You will find the mysterious island off the coast of Tonga, where it is actually nestled between two other un-eroding islands.

The island rests between the islands of Hunga Tonga and Hunga Ha’apai, two older islands.

And it gets its name from both.

To continue the baby metaphor even more, the small island actually takes it’s unofficial name from both of the larger islands.

And the name is a bit of a mouthful.

Meaning that the small island is called Hunga Tonga-Hunga Ha’apai or HTHH for short.

That’s a long name for such a small island.

But I think it really rolls off the tongue.

And the island has only recently been explored.

Recently, a group of NASA scientists took to the island to study it.

The team was led by Dan Slayback.

Slayback, owner of one of the coolest surnames in the world, came to the island from NASA’s Goddard Space Flight Center in Greenbelt, Maryland.

But he wasn’t alone.

And they got to work quickly.

The team took around 150 GPS measurements that narrow down each point and location on the island.

And this allows them to do something cool.

Along with this, the team used a drone to take aerial shots of the island, allowing them to make a realistic 3D model.

Slayback spoke out about the experience

On NASA’s blog, Slayback spoke out about the expedition, saying that: "It really surprised me how valuable it was to be there in person for some of this. It just really makes it obvious to you what is going on with the landscape."

I’m sure some of you are now wondering something.

Why is NASA so interested in a small pacific island? Aren’t they all about outer-space?

Well this story does have an inter-galactic element.

NASA scientists believe that the island can actually help them to investigate how volcanic landscapes interacted with water on the surface of ancient mars.

We all know that’s what they’re actually doing!

But the island had some surprises.

When travelling the new terrain, the team found that the island was covered in ‘pea sized’ black gravel.

There was also a clay-like mud washing out of the island, something that frankly baffled the scientists.

Even Slayback was confused.

"Even though we'd seen it we didn't really know what it was, and I'm still a little baffled of where it's coming from. Because it's not ash." Yeah, you don’t think clay when you hear volcanic, do you?

But the island is also beginning to thrive.

While exploring the island, the team found vegetation beginning to grow there. Meaning that one day the island could be a tropical jungle.

And there’s even life there.

Being such a young island means that not much animal life would have found its way there, but the island is actually the home of a lone barn owl and some nesting sooty terns.

Now it is key to figure out how long the island will last.

The team took many mineral samples, with the goal being to discern how long the island’s construction will last against the harsh elements.

And the island isn’t actually flat.

One of the major findings by the team was that the island isn’t actually flat. Although Slayback said that it was ‘mostly flat’. There were gradients and patterns due to wave erosion.

They even found erosion gullies.

It may not sound exciting to us, but to this team that was like finding money under the couch.

Slayback said that the team who went to the island felt ‘giddy’, showing just how much they love exploring and studying this kind of stuff.

Now it’s back to work.

Having now left the island, Slayback and his team have work to do.

By looking through all of their readings and data, the team will figure out the volume of the island, and just how much ash and volcanic matter erupted from its vent.

They will also see how strong the island is.

These readings will also determine how long the island with last, to see if it will resists erosion for decades to come.

I mean, come on, Hunga Tonga-Hunga Ha’apai is just too long for such a small island.

And it needs its own identity.

It can’t go on being associated with its parents.

And maybe we’ll discover even more islands in future. Who knows? The world is an amazing and beautiful place.
20%

$15.40 $12.32
Buy Now
See More Deals
We hope you find these deals as awesome as we do! Just an FYI: we may receive a share of sales from links on this page