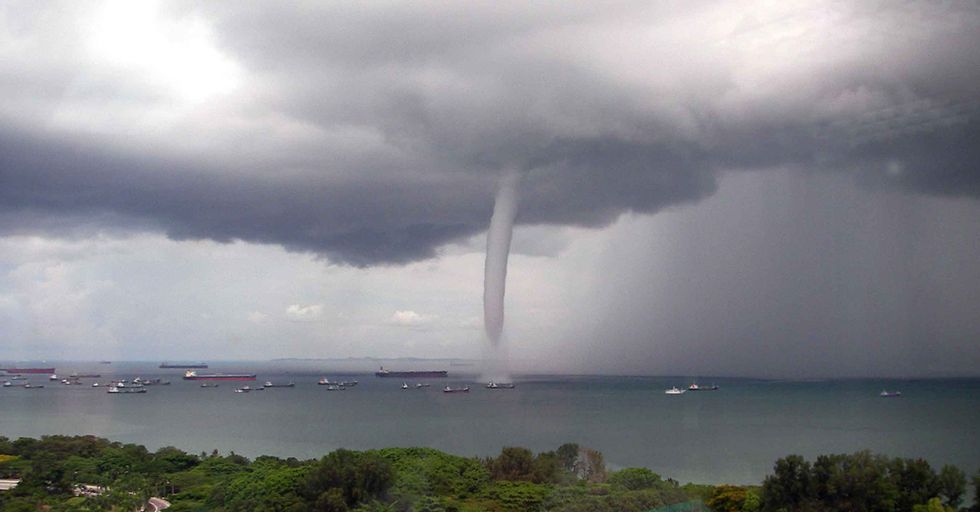 Mysterious 'Water Spout' Appears Off the Coast of Malaysian Island

It's a bird, it's a plane, it's...actually totally terrifying. Residents of Penang, Malaysia have been Tweeting and sharing a video of a bizarre and destructive weather phenomenon. It's not a tornado. It's not a hurricane. It's not even a tsunami. It's something that you may never have heard of, but that has destroyed nearly 50 buildings on the island.

It's called a waterspout, and it's a rare occurrence. For over five minutes, residents watched the spout off-shore before it hit land, ripping roofs off of houses and generally scaring the bajeesus out of everyone around. Thankfully no one was hurt, which means that we can revel at this astounding force of nature without feeling guilty about it. This thing completely defies gravity.

We've got some amazing photos of the waterspout for you to check out, and make sure you scroll until the end to see the actual video. This thing is 100% mind-blowing.

Ok but what even IS a waterspout?

Because honestly it sounds like something out of an anime.

No, it turns out that a waterspout is a real thing.

It occurs when a vortex (basically some intense wind) happens over water.

Now the vortex itself isn't that weird.

What IS uncommon is a waterspout that picks up actual water. That's when things start to get wild.

Hold onto your hats friends, because this sounds entirely made up.

Any marine life within about one yard of the surface can get picked up and flung into the air.

Do you want a Sharknado?

Because this is how you get a Sharknado.

They can also be super misleading.

But in all seriousness, these babies are super interesting.

It may look like a tornado, but it's not.

This cute graphic explains it all.

Ok, ok, enough preamble. What does it actually look like?

I think Randy Jackson speaks for us all on this one.

This would be quite the way to ruin a vacation.

But luckily for us, we can watch it from the comforts of our own home.

Because this is 2019 and when people see something terrifying, they take videos and pictures of it.

Definitely need a picture of that!

Some of the pictures are actually amazing.

Look at that sky!

But honestly this media is actually incredibly helpful.

The rest of the world has a sense of what's going on.

And as Katie McMahon points out...

People would have had to wait much longer for information about what was happening.

But these images are just a taste.

If you want to see the full video you'll have to keep reading.

And we can't forget that the waterspout has real consequences.

While no people were hurt, property certainly was.

Many of the buildings couldn't stand up to the force of the wind.

While some buildings appeared sturdy enough to withstand it, many smaller structures were damaged.

Homes in particular were damaged by the storm.

We're sending good thoughts to everyone whose house was damaged!

Thankfully most waterspouts weaken as they hit land.

Which kept the damage minimal.

But if the waterspout made it part way onto land I have to wonder...

Did anyone get beaned in the head by a flying fish?

Attacked by a vicious land octopus?

Who knows what manner of sea creatures could come ashore?

But enough goofing around.

You're here to see the videos aren't you?

Sure this thing looks wild when it's still.

But look at it move!

The Big Kahuna of waterspout videos.

Can you imagine watching that come at you?

I would be booking it.

Or even just a bit of both?

Here's what I know:

I'm probably not going to vacation in Malaysia any time soon.