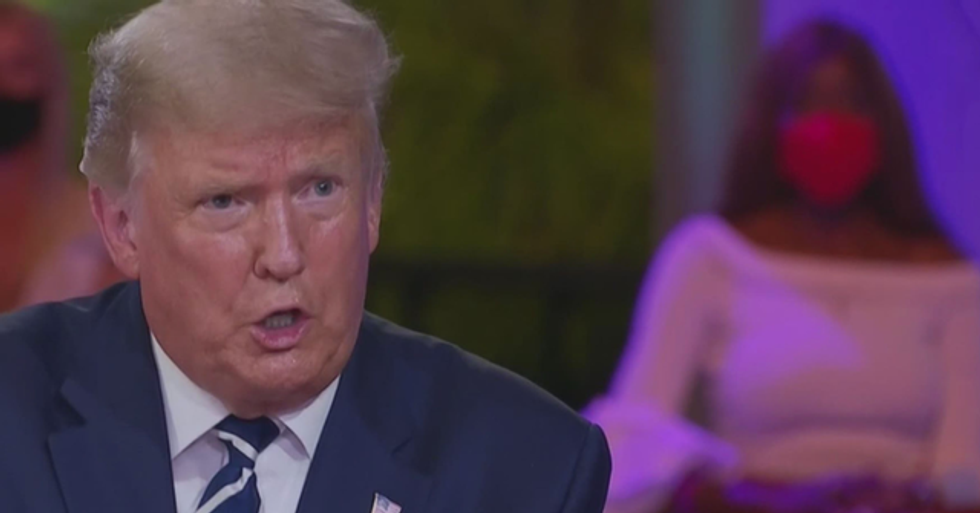 One woman in the audience has truly stolen the show.

It was an explosive one...

President Donald Trump's Miami town-hall forum this evening was far from dull, to say the least.

Now, the event was originally scheduled for October 9th...

But was hastily canceled over coronavirus fears.

But it was established almost instantly that tonight's event was to be held virtually following Trump's positive COVID test.

Meanwhile, the Democratic candidate, Joe Biden, was putting together his own plan to appear in an ABC News town hall in Philadelphia...

Which is the very thing we have been watching this evening.

Trump's NBC forum kicked off in Miami with Savannah Guthrie.

And it didn't take long for things to become very heated.

The President was firm in "denouncing white supremacy" when asked about it...

And it's clear it struck a nerve as he began viciously interrupting Guthrie when she was questioning him on these sensitive topics.

We all know that Trump came under fire in the last debate after he failed to denounce white supremacists and the Proud Boys...

So of course it was bound to be brought up tonight... and immediately, Trump was on the defense.

He was also grilled on his recent retweets containing false conspiracy theories...

Trump sneered, “So cute” at Savannah Guthrie, just in case women forgot how much contempt he holds them in. https://t.co/uDXQwFCgLj
— Sarah Reese Jones (@Sarah Reese Jones)1602813827.0

To which he defended himself by degrading Guthrie by saying she was "so cute." Not cool, Mr. President.

But it seems that Trump still has some very loyal supporters...

And some seem to be a little bit too loyal.

During the Q&A part of the forum, in which potential voters were able to directly speak to the President, a woman named Paulette was pulled up from the crowd.

She seemed to be a little bit giddy to be on TV, but it turns out that it was just because she was in the presence of such a "handsome man."

Paulette, who was dazing at Trump, said:

"Good evening, Mr. President! I have to say, you have a great smile!"

But the internet certainly didn't agree.

People were creeped out, to say the least!

Imagine having seen so few people in your life that you think Donald Trump is handsome. https://t.co/vWphYVYhXm
— Stacey Pulwer (@Stacey Pulwer)1602811161.0

And it was all very awkward and uncomfortable to watch.

Is this woman okay?

Well, that is what many people are now wondering!

Was it really necessary, though?

Many feel that Paulette's childish swooning is totally irrelevant during a Presidential Debate... especially one that is so tense, too!

And there was another Trump follower who shook up the internet.

This lady who sat behind him and nodded emphatically - at everything he said.

@RadioFreeTom I wish I had someone who believed me the way that woman with red mask believes Trump. We could all be so lucky.
— Mike Mahoney (@Mike Mahoney)1602808976.0

I don’t know who the woman with the red mask is behind @realDonaldTrump but I’m becoming a huge fan of her agreemen… https://t.co/cLXyoLFpQ8
— Jonathan T Gilliam (@Jonathan T Gilliam)1602808648.0

@MMahoney224 @RadioFreeTom 😂 her constant nodding at this ridiculous sham is driving me NUTS!
— bricabracnat (@bricabracnat)1602809311.0

@MMahoney224 @RadioFreeTom Ok break- they really should switch her out. This looks bad for NBC
— Dennis Herring (@Dennis Herring)1602809057.0

Watch her for yourself!

Want more drama from the election? Scroll on...