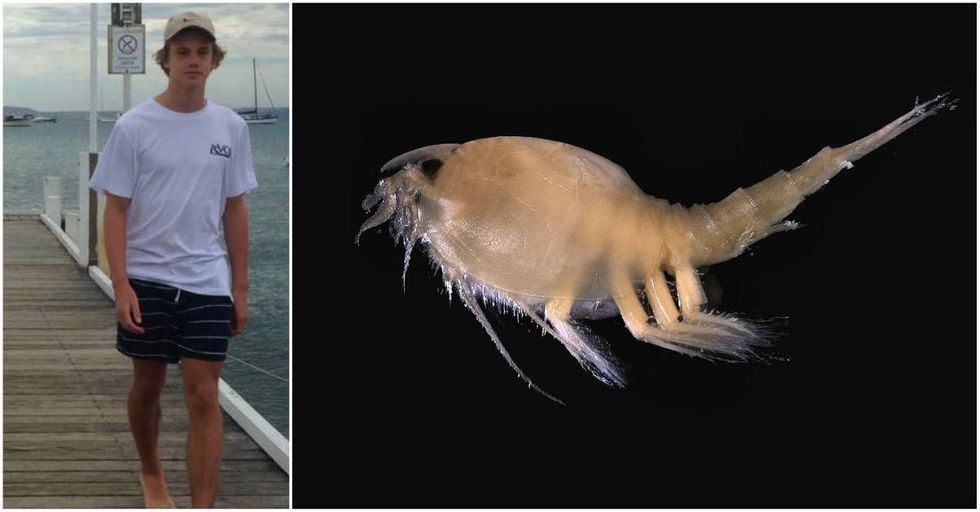 He hopped into the bay to soak his sore muscles and emerged...covered in blood?!

This latest trauma out of Australia is too much for the Internet to handle.

By now, most people probably know that Australia is home to some of the most terrifying wildlife on the planet.

Whether it's giant spiders, giant snakes or giant jellyfish, Australia has something that will terrify you.

But if you grew up in Australia, then you're probably used to it.

Australian 16-year-old Sam Kanizay ventured out to his local Dendy Street Beach in Brighton for a swim.

Sam had played football earlier and figured a swim would be nice and restorative.

After a few minutes in the water, though, his legs started to tingle, and not in a good way. (Is there a good way?)

He emerged from the water covered in blood from his calves down.

At first, Sam told The Age, "My first instinct was that I must have stepped on a rock," he said. "But I realized that couldn't have been it, because it was evenly distributed over my whole ankle and foot."

He went home and tried to clean himself up, but the bleeding wouldn't stop.

So, off to the emergency room he went. Once he got there, his wounds continued bleeding and doctors couldn't figure out why. Sam's father Jarrod said, "We had the emergency room full of everybody that was working there just fascinated, they were all on Google afterwards, hypothesizing as to what happened. They pretty much had 10 different hypotheses but nothing yet." It wasn't until Sunday afternoon when a nurse suggested on a whim that his injuries may be the result of...

University of Melbourne marine biologist Professor Michael Keough told reporters, "They're scavengers who'll clean up dead fish and feed on living tissue." Explaining, "They're mostly less than a centimeter long, and so the bites they make are pretty small, and so that's more consistent with pinprick size marks."

"It's just food for them. Especially if he's been standing around for a long time, it's the chance for more of them to come in and start biting."

"Just be attracted to a little bit of blood. And if he's standing in the water and he's cold and may not notice a whole lot of little bites." Oh god. They're like miniature piranhas.

Upon hearing this terrifying diagnosis, the Internet collectively lost its mind.

Can you imagine wading into a bay for a quick swim and emerging partially eaten alive?!

Terror aside, sea fleas are apparently a normal component of the marine ecosystem.

They feed on dead fish. Keep the oceans clean. And, you know, occasionally eviscerate human flesh. Completely perplexed by his son's injuries, Jarrod decided to do some investigating of his own...

While his son was healing in the hospital, Jarrod traveled back to the scene of the crime, steak in hand.

He wanted to see if he could simulate exactly what happened to his son's legs with a piece of raw meat. Sure enough, his little experiment worked!

"We found thousands of little mite-type creatures in our net," he recounted.

"We put them in an Esky and brought them home and looked at them intently and let them swim in white dishes with red meat." "Interestingly, overnight they've essentially all clung to the meat and have been busy overnight eating it."

If that doesn't have you squirming in your seat, you are far stronger a human than we'll ever be.

Jarrod brought his sea flea haul to Museum Victoria marine scientist Dr. Genefor Walker-Smith for examination and she offers a bit of hope. Emphasis on a bit.

"I think this is quite a rare thing," she said of Sam's injuries. "I really just think [Sam] was in the wrong place at the wrong time, probably." How can you avoid the same flesh-eating fate? Try steering clear of swimming at night. When you do decided to dive in for a swim, cover up in a wetsuit.

So on that note, who's ready to hit the Australian beaches for a swim?