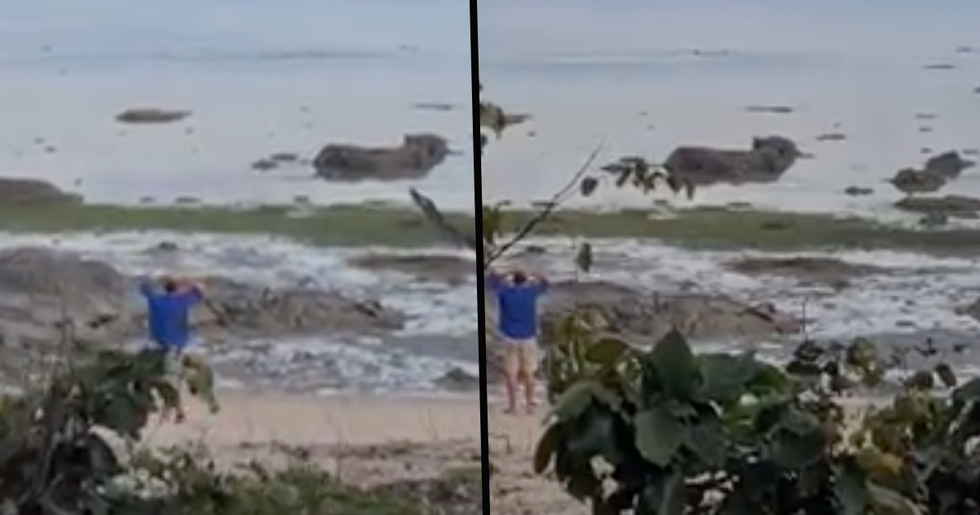 Horrifying footage has gone viral of a dog's near-brush with death...

A terrified dog owner had the fright of their life this week.

Footage has emerged of the stomach-churning moment a doggo narrowly avoided being killed by a crocodile.

Now, of course, for many pet owners, their pooches are part of the family.

Many of us couldn't imagine the pain of something awful happing to our doggos.

But, one story has caught the attention of the internet this week after an owner's worst nightmare came true.

A dog who was playing in the water at a beach in Australia this week had a close brush with death...

But what happened next left helpless onlookers suitably shaken.

A woman vacationing at Umagico, 35km south of Cape York in Far North Queensland, posted a video of the horrifying near-miss online.

The swimming pooch can be seen just seconds away from being in the jaws of a hungry crocodile.

Hannah, who filmed the clip and shared it via her Facebook blog Han and Her Four Men, said the dog is a well-loved local pet.

"There were about fifteen people on the bank watching it unfold and every single person had their hearts in their mouths," Hannah told Daily Mail Australia.

"We all looked at each other afterward with utter dismay and shock at what we had just witnessed."

She went on to describe the incident as "heart-stopping."

"You watch David Attenborough on the screen and get nervous but to witness it in real life is absolutely heart-stopping. Everyone was just so thankful it was a happy ending!"

The footage is nail-biting, to say the least.

And there's been a lot of strong reactions online.

Some were obviously glad to see the dog is now safe...

While others slammed the owners for allowing the pooch to swim in the water in the first place.

Watch the terrifying footage below.

One word: goosebumps. For another shocking pet story, scroll on...