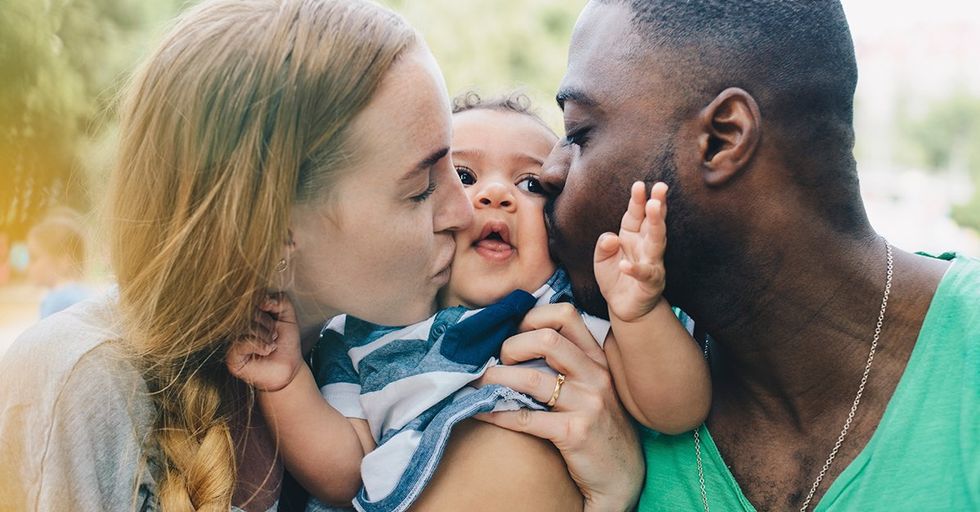 Parents Share the Names They Truly Regret Giving Their Children

When choosing your child's name, there's a lot to consider.

You might want something that's classic, but not too stuffy. Pronounceable, but not too common. Unique, but not Youneek, if you know what I mean.

At the very least, you want to give your child a name that you're not going to regret later.

Unfortunately, some parents do regret the names they give their children. Here are their stories (courtesy of an AskReddit thread).

Twelve years ago we had twin boys. We knew one would be Thomas after my wife's uncle, but struggled to name the second. For about 28 hours he was Baby B. Then we finally settled on Jeremiah. Two days later, we introduced them to our pastor, and he said, "Oh, cute Tom and Jerry" I looked at my wife, and we were both thinking "Oh, we did not just do that." But we left it. –[deleted]

My friend's parents met during the '60s, and they were/are crazy hippies. When my friend was born, they decided to give him 14 middle names: Dorsey Abdul Jalil Francis Brian Albert Barney Willie Kawolski Jeffery Faith Love Star Breeze. He has a common first and last name. They said all of that at graduation. –I_dont_like_a**holes

I think my mother regrets my name. She wanted to name me Sebastian, but my grandmother said she'd call me Se-bastard. She caved and named me Joshua. I heard this story all my life, so when I had my first son, we named him Sebastian. I've never seen my mother so happy. My grandmother calls my son by his middle name. –collouko

Must have been a choosy mom.

My actual first name is Jif. People think I'm from New Zealand and I'm saying "Jeff." Thanks, Mom and Dad. –Jifman I can't decide if this next name is terrible or brilliant.

My wife regrets my kid's initials...FCK. But I think his pickup line choices could be hilarious. "My initials are FCK, all I need is U." –godfetish

My best friend named her firstborn son Jaydenn. When she told me the name, I asked her if she really wanted to do that? She said yes. She and her husband liked the name but wanted to make it a little different by adding an additional N. She now regrets it. The fact that she regrets it shouldn't bring me joy — but it does. Good luck on those biz cards, little guy! –goldenw

My GF named her daughter Lera. She admitted she made a mistake once she realized that the full version of it was Valery (which is both male and female name in Russia), and that was the name of her step-father, whom she hated her entire life. –igatrinit

My Mom def regrets my name. She named me after her favorite aunt that had died a few years before I was born. The wound was too new, and no one wanted to call me by her name. My middle name is Mackenzie after the beer dog Spuds Mackenzie, my dad got to pick that one out. He lied to her and said it was after his "Irish heritage." So I get called by a name that is not on my birth certificate. –LucyOfDorne

Can you take the name back?

My father-in-law named his first son (my brother-in-law) after himself, even his middle name is the same. The difference is the Sr. and Jr. title. Normally this wouldn't be so bad except that his son turned out to be a complete f**k up. He's a 30-year-old alcoholic who has never held a job longer than a week and never had his own place or even car. He's been arrested multiple times for DUIs, and just doesn't know when to keep his mouth shut. He's stolen checks from his parents and with the same name, it's easy to get them cashed as if they were his own. I also can't tell you how many times cops have tried to serve warrants to his dad that were actually for him. He regrets it a lot and always tells me and my husband to never ever name our kids after ourselves. –Screammealullaby The parents in this next story definitely didn't think their plan through.

There are other letters, you know.

My mom named us all with the same initials (Think Joseph Thomas, Jennifer Theresa, James Trevor, and Julia Taylor). She always says it was one of the biggest mistakes in her life because it made it impossible to call the right name whenever she was mad or in a hurry. I was the youngest, and I don't think I ever got called the right name. To compounded matters, my dad had 9 sisters, all named with the letter "A," so he had to work through all of his sisters' names, then my siblings' names before he got to me. –jssaaihm

A mistake of epic proportions.

I used to work tech support with a guy whose name was Gandalf. In the '70s (when he was born) Tolkien wasn't even a nerd thing, it was a hippie thing. His parents were big hippies and loved the books. So they named him Gandalf (his sister's middle name is Galadriel). He said at first, people rarely recognized the name. It was a weird name, sure, but few people knew he was named after a fictional wizard. Until the movies came out. He HATES Peter Jackson. –Maclimes

Do not do this.

My wife and I have a daughter that we named Jordan. I'm fine with that, my wife is a very independent woman, and Jordan is kind of a strong name for a girl. Now we're thinking about having another kid, and if it's a boy, she wants to name him Michael. Jordan and Michael. Michael and Jordan. I'm 6'7", she's 6'3" and both very white. She somehow thinks that it won't be weird if our (most likely) tall children are named freaking Michael, Jordan. I don't want to be answering questions or listening to jokes about their names for the next 20 years though. –Mad_Ludvig

My mom had this obsession with naming me, Pepper. All my other siblings have names derived from family members that are pretty normal, but her big plan for me was Pepper. Luckily, my dad wrote me up as Michele with one L (to be unique, he says — thanks, dad) while my mom was sleeping. She still mentions the Pepper thing at every single family gathering and/or holiday. That woman holds a serious grudge. –mdeggies

I named my oldest daughter Darian, because my husband then (we were 17 and very stupid) wanted to call the baby Damien, and this was my compromise (because I wasn't naming a child after the demon child in 'The Omen'). Also, there was a female DJ on the radio at the time called Darian, so I thought it would work. Well, it turns out that Darien is most often a boy's name, and very often the name of a black person. My daughter is in her 20s now, and she has never let me live it down. Everywhere she goes, people expect a black man. She's a nerdy, short white chick. I had good intentions. –apalsox This next one is definitely just a coincidence, but that probably didn't make the parents feel any better.

I bet you're right.

Fifty years ago, the family a few doors down from me had a son; they called him Boyd. His surname is George. They're fundamentalist Christians. Bet they regretted that. –Johnny5Miyagi

Naming your kids is tough. First, you have to run it through the "people you hate" filter. We hate a lot of people. Second, you want to be hip, but not too hip. The world can do without another Ansley. Rose is an up and comer too. Third, you have to run it through the playground filter. Asher? Ash-hole. Plus I'm a teacher. There are a lot of names I can't use because of certain students. I remember Oscar. F**k man, I can't name my kid Oscar. So we settled on William and Jillian. Willy and Jilly. Wait. How douchey is this? Kids' names that rhyme??? We seriously didn't figure this out until so random person was all like "how precious!"–anonoman925

I wanted something simple, strong, and easy to remember. Robert Smith. Straight to the point. When the nurse, or whoever she was, came to my bed in the hospital to record the name that's what I told her. She asked what the middle name was, I told her, "No middle name." A couple of weeks later when the record of birth arrived, it read: "Robert No-Middle-Name Smith." –illusathrowaway2day

I'm Loki impressed with this one.

My husband and I had a deal. If it was a girl, I got to pick, and if it was a boy, he did. Our son's name is Loki. I am not a big fan, but he loves it. I keep hoping it will grow on me. –Lw124 Know anyone who's expecting? Share this with them as a word of warning!