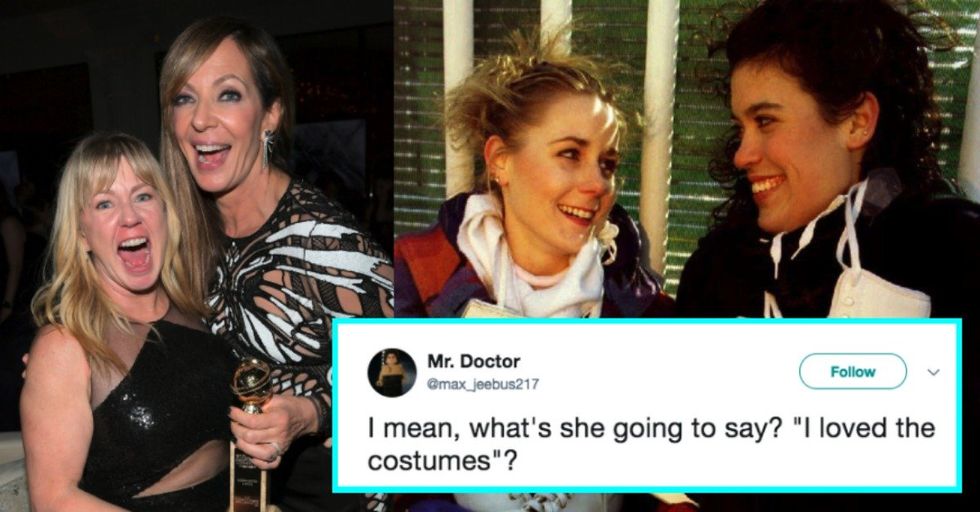 Nancy Kerrigan Finally Breaks Her Silence About 'I, Tonya'

All the award season buzz surrounding the movie I, Tonya has shone a bright spotlight back on Tonya Harding — the woman is pretty much everywhere you turn. The movie (starring Margot Robbie as Harding) paints the Olympic skater as an innocent victim, caught up in cycles of abuse and unaware of the plan to attack her figure-skating rival, Nancy Kerrigan.

As I, Tonya gains steam on red carpets all over Hollywood, and Tonya Harding becomes a folk hero of sorts, there's one voice that's been missing in the conversation: Nancy Kerrigan's. But in a recent interview with The Boston Globe, Kerrigan reveals exactly what she thinks about I, Tonya and the renewed interest in the story that defined her past.

Tonya Harding is back in the zeitgeist in 2018 thanks to the Margot Robbie film I, Tonya.

The movie is a biographical look at the life of the Olympic figure skater with a special focus (obviously) on the events surrounding the infamous attack on Harding's teammate, Nancy Kerrigan, prior to the 1994 Olympics.

The release of the film and the subsequent award recognition has afforded Tonya Harding a comeback of sorts that probably wouldn't have happened otherwise.

Allison Janney won the Golden Globe for her portrayal of Harding's mother, Margot Robbie took home the statue at the Critics' Choice Awards, and it doesn't seem like the nominations or wins are going to slow down anytime soon. In all this, the real Tonya Harding has become a fixture on the red carpet, celebrating with the actors and enjoying the success of the film.

In all the hullabaloo, it's easy to forget that Tonya Harding probably wouldn't be in the position she's in today if it wasn't for Nancy Kerrigan.

And what Nancy Kerrigan went through is arguably just as traumatizing and definitely just as life-changing as what Tonya Harding endured.

Although the movie's been out for a while now, Kerrigan has been mum about what her take on the film is...until now.

Dan Shaughnessy talked to Nancy Kerrigan for The Boston Globe about her reactions to the movie and what she thinks about the "cinematic softening of Tonya Harding."

After all, Shaughnessy wrote, Kerrigan "was a victim of Harding's dysfunctional life."

You'd think she'd have some strong opinions on the matter of I, Tonya and the renewed discussion of the story. Welp, it's a good thing Shaughnessy still had Kerrigan's number in his "20-year-old at-a-glance phone book" because Nancy Kerrigan answered his call on the first try.

When asked if she wanted to comment on the phenomenon of I, Tonya, Kerrigan had a maybe somewhat predictable answer.

"Not right now," she said. "I really have nothing to say about it. I haven't seen anything. I haven't watched anything."

"I've been busy," she continued.

"I was at the national [figure skating] championships this week so I didn't watch the Golden Globes. I haven't seen the movie. I'm just busy living my life."

When asked about the movie specifically, about what she thought of the portrayal of Tonya Harding in Hollywood, Kerrigan said, "I don't know."

"At this point," she said, "it's so much easier and better to just be... It's not really part of my life. As you say, I was the victim. Like, that's my role in this whole thing. That's it. It's weird, that's for sure. A bizarre thing. The whole thing was crazy, being that it's a story. I mean, come on."
Later in the day, Kerrigan's husband and manager Jerry Solomon called Shaughnessy and said, "Our position at this point is to say nothing. When we collectively, or Nancy individually, decide what to do, when we are ready to say something, we will. But until that time, we've been very consistent — and as you can imagine I'm getting calls from everybody under the sun from all around the world — so just to be consistent we're really not saying anything at this point."

So there you have it. But when Olivia Munn parodied I, Tonya at the Critics' Choice Awards in a fake trailer for I, Nancy, Kerrigan watched. And here's what she had to say:

We have a feeling that even though Nancy Kerrigan is very busy, working hard and attending skating championships and all that, she is keenly aware of what's happening. We can't wait until she lets loose.