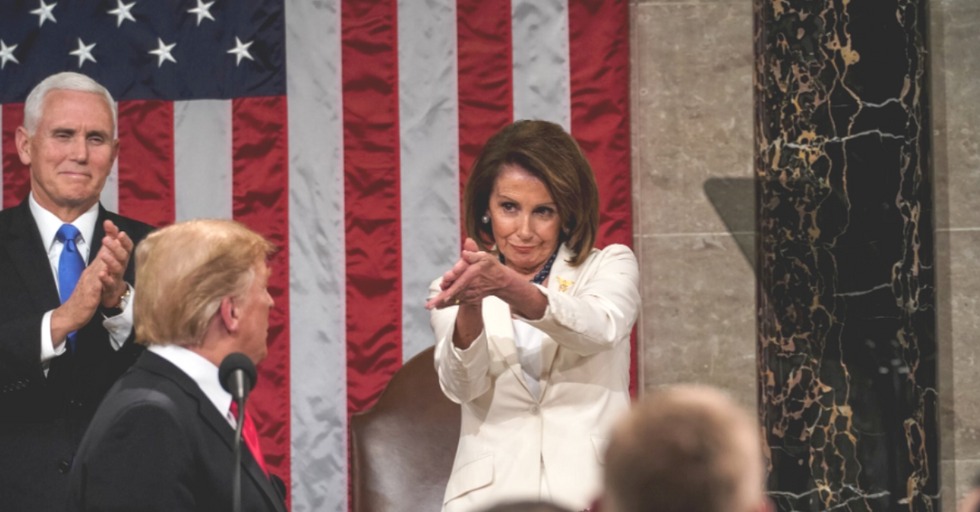 Last night, Donald Trump gave the annual State of the Union address. But viewers ended up focusing on someone entirely different: House Speaker Nancy Pelosi. Turns out, Pelosi can boast having the most iconic moment of the whole night.

When Pelosi stood and applauded a line from Trump's speech, viewers couldn't stop talking about the silent sarcasm that came with it. Pelosi gave Trump a literal clap-back – and now, it's a full-on Photoshop battle as well. After users on both Reddit and Twitter saw the clap-back meme, they added a few extra embellishments. Because what can't Photoshop do? And as you'll see, the result is absolutely hilarious!

Take a look at the many clap-back memes that have consumed social media, and the moment that inspired them!

Donald Trump spoke for an hour and 20 minutes during the address.

But everyone agrees that Nancy Pelosi stole the show.

"We must reject the politics of revenge, resistance, and retribution, and embrace the boundless potential of cooperation, compromise, and the common good," Trump said, to applause. But if you're Nancy Pelosi and fully aware of the irony, given Trump's history of mockery and Twitter insults, you put a little something extra into the clap.

Or, as Patton Oswalt puts it:

Have we discovered the next source of clean, renewable energy? Sarcasm is the unending gift that keeps on giving.

And remember when Cardi B threatened to dog-walk Tomi Lahren?

Yeah, Cardi B isn't the only dog-walker on the block anymore!

And there's no doubt about the message Pelosi was sending.

Because Nancy Pelosi's daughter went on Twitter and confirmed it! Pelosi has been the master of meaningful claps for a long time.

So, Photoshop-wizards went a little crazy.

But it's all for the best, because now we've got a ton of jokes!

You could say this joke was made "off the cuff."

But more accurately, it seems like she wants him to put on the cuffs.

And now, Nancy is clapping back at everyone.

I mean, she's still clapping at Trump a lot in these. But there's variation!

In some cases, the Photoshop job was just a simple change in hand position.

Simple, yet so powerful.

A delightful number of people took advantage of this generous gift!

Were you disappointed with the Super Bowl half-time show?

Well apparently, so was Pelosi.

And Molloy saved a few claps for the Fox News pundits.

Honestly, this meme is even better than the shame-nun from Game of Thrones.

Because here, Brady is getting a clap-back.

Or just don't golf so much?

She fits right in with the whole mood of the original meme, though.

It's about time for one, tbh.

Whether it's "work together" or "mission accomplished," these memes have the same energy.

They say a picture is worth a thousand words, and all of those words are coming from that Photoshopped cutout of Nancy Pelosi.

Sometimes you've gotta give yourself a hand.

Or, you know, set your Apple Watch to do it!

When you don't like the decor, but can't say it out loud.

Just duck behind a tree and wait for the opportune moment.

Because why not, you know?

They say justice is blind.

But sometimes, it's also a stone cold clap-back.

And how about all the Supreme Court scandal with Kavanaugh?

Yeah, we feel ya there, Nancy.

The power of sarcasm knows no bounds.

This picture tells a story.

Trump's expression: Hey, that was a great game of golf! Photoshop-Pelosi: Sure, Jan. Whatever you say.

Can you imagine the sheer power of Pelosi's clap-back and the Plaid Shirt Guy's facial expressions?

And speaking of facial expressions:

Bonus! Congresswoman Alexandria Ocasio-Cortez of NY, with an expression that truly says it all.

Use these memes to take care of yourself.

And, of course, to have a good laugh! Now, go and share these hilarious jokes with your friends!