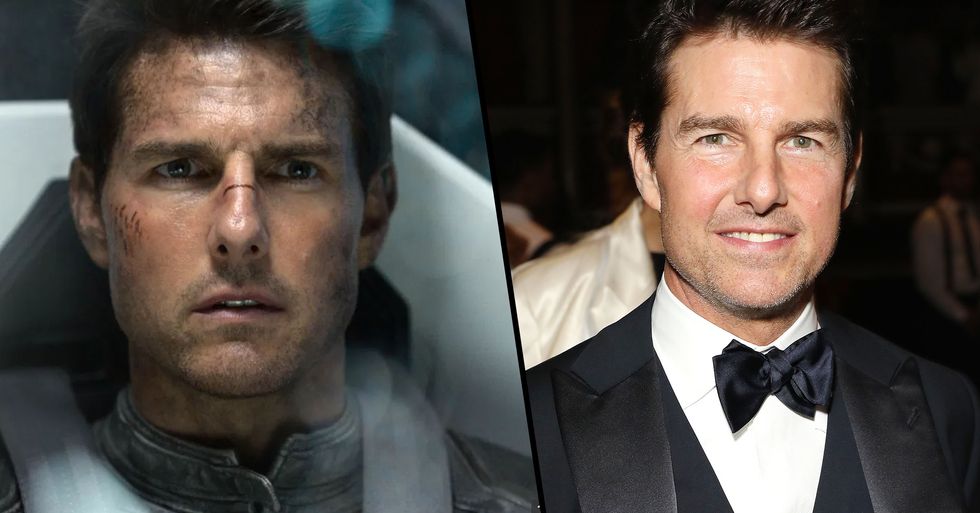 Recently, after rumors started circulating that Tom Cruise is set to work alongside Elon Musk's SpaceX project with NASA to shoot an action movie in outer space, we were thinking that it would be too good to be true. But the incredible news has now been confirmed by the organization in a very exciting announcement.

They also revealed why they decided to do this in the first place.

And it involves Elon Musk's SpaceX, NASA, and going into outer space.

In fact, he's won 3 Golden Globes and has been nominated for three Oscars for his more "serious" ventures, including Rain Man, The Fourth of July, and Jerry Maguire.

The Church has a certain modus operandi...

And many speculate that a lot of the weirdness in his life can be attributed to his religious beliefs. The majority of these centers around Cruise's weird romantic relationships.

The 2 even started a family together...

And, for further evidence...

And in 2005, Cruise went official with actress Katie Holmes...

For those who don't remember, Cruise was interviewed by Oprah and jumped on his sofa in one of the most unconvincing displays of love of all time.

Soon after, the pair married...

But things between the pair quickly soured.

In fact, Holmes apparently blindsided Cruise by filing for divorce from the actor in 2012. The sharp turnaround has led many to believe that Holmes had some sort of 5-year contract of marriage.

Cruise's whirlwind of a personal life has captivated fans for years now...

But it certainly hasn't affected his career as a professional actor.

He is now busier than ever...

And there's no denying that he's very good at what he does.

He's planning on going into outer space for his next big role.

Only Tom Cruise would agree to do this...

And, of course, Elon Musk has something to do with it.

It's currently unknown when the project will be underway...

But Deadline reported that Cruise will be working with Elon Musk's Space X for a project drawn up by NASA - which will be the first-ever narrative feature film in outer space.

It has nothing to do with the Mission Impossible franchise...

But it will be an action-adventure shot in outer space... which, we must admit, sounds incredible.

Fans are excited over the news...

Tom Cruise is developing a project with Elon Musk's Space X and NASA that would be the first-ever feature film shot… https://t.co/B8HT1mnMW4
— Just Aech (@Just Aech)1588659437.0

And it's pretty clear that SpaceX couldn't have picked a better actor for the challenge!

It seems as though some people didn't want to believe that the news could be real though...

So the administrator of NASA, Jim Bridenstine, did us all a favor and confirmed all the rumors in a very exciting Twitter post.

Here's what they had to say:

NASA is excited to work with @TomCruise on a film aboard the @Space_Station! We need popular media to inspire a new… https://t.co/0mOEINnpuA
— Jim Bridenstine (@Jim Bridenstine)1588706513.0

And the reasons behind their latest project were actually very heartwarming. We hope that it does inspire the next generation of scientists to join the space organization.

But there was one little thing...

There was no mention of Elon Musk. If the Space Station is involved, how will his company tie into it all? Interesting...

Make sure to stay posted for further updates about the project.

And in the meantime, keep scrolling to read about Elon Musk's happy news...