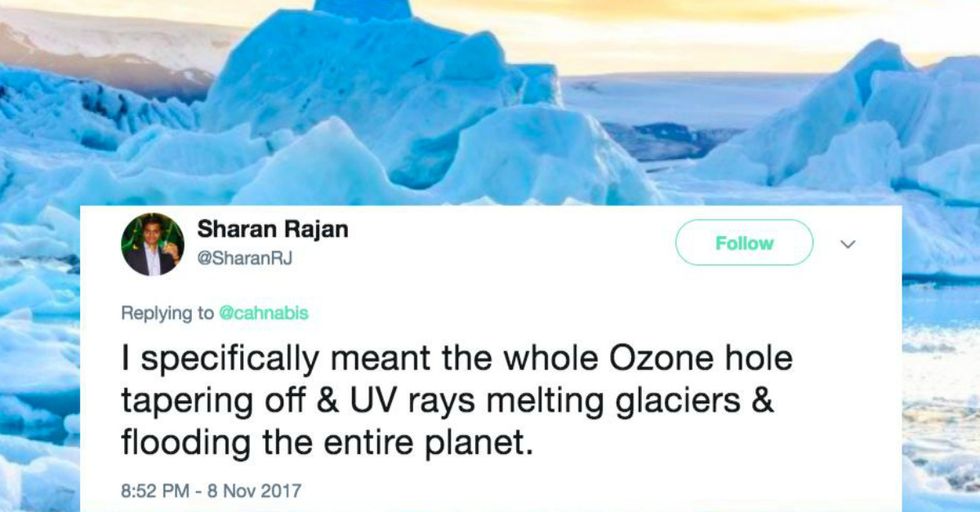 Have you ever had trouble falling asleep, plagued only by the simple question of "Which glacier is going to engulf my city when it melts?"

If your anxiety has asked you this question, fret not! Thanks to NASA, there's a handy-dandy diagnosis tool and a study published in Science Advances that lets you know which glacier poses a threat to certain cities. The study has analyzed which glaciers to worry about if you live in Sydney, or New York, or any of the other 291 places in between. It's also not a matter of if the glaciers melt, but when... and thanks to global warming (the Trump administration's favorite topic), they're melting fast.

Since the 1960s, glaciers have significantly shrunk.

It's a gradual and slow process because of global warming, and because of it the ice melts and sea levels rise. Which, sure, you don't have to be a scientist to understand, but it can still feel alarming to think about.

Thanks to author and NASA Jet Propulsion Laboratory researcher Eric Larour, the breakthrough study can let people know in coastal cities which glaciers to be worried about.

The funny thing about science (science can be funny too, okay!), is that sometimes the findings can seem backwards or a little bizarre. For instance, the study found that it's often the ice furthest away from you that you have to actually be worried about.

Are you ready to have your mind all kinds of blown with fancy science facts?

As Earther explains, due to a lack of gravitational pull, sea levels will in fact drop in areas where there's huge ice loss. So if you take Greenland and New York, there's significant ice melting on the side of Greenland furthest away from NYC. When all that water starts to rush, it's going to end up right on New York City's shorelines.

If you were to break it down, the reality is that every part of the planet will eventually be submerged in water.

Before you start having a panic attack, take a few deep breaths. The findings are actually super helpful when it comes to city planning.

Think about it: wouldn't you rather know if your city was at risk for being taken over by a melted glacier?

It's a huge help to city planners when it comes to figuring out which projects they should be investing in and putting their money into. There can be preemptive steps taken to help battle the rising sea levels, instead of just pretending it's never going to happen. The findings bring up another important issue...

Climate change and global warming are huge hot topics these days (no pun intended), especially since Trump's administration is not prioritizing taking steps to save and help our planet.

Unfortunately, it seems the president isn't as in awe of our planet as these scientists are. “The idea that our oceans are not bath tubs and ice sheet have a gravitational halo around them is simply so cool," Robin Bell, a cryosphere researcher at Lamont-Doherty Earth Observatory, told Earther recently. “It is one of those things people love to learn about. This paper is the first real effort to pull apart that concept of it matters where the ice comes from."

It is so cool, and the fact that science is evolving and we're gaining the tools to learn even more about our own planet is exciting.

Of course, it also raises the stakes and alarm when it comes to realizing just how much global warming is affecting the planet. Whether you're looking at California fires, or horrifying hurricanes, there's no denying that global warming is moving at a catastrophic rate.

Reports even show that because of "gaps" in data, it was believed that global warming wasn't happening as quickly as is accurate.

But as The Independent explains, global warming is progressing much faster than expected. So it makes sense that glaciers around the world are melting, and that cities need to seriously think about the impact it has on them.

And it's a good reminder to everyone that there is no Planet B.

This is the only one we've got. If you don't know where to start in educating yourself on global warming, it might be worth it to check out Al Gore's documentaries, including his recent An Inconvenient Sequel.

Yes, it can be scary to think about the rate in which our planet is declining, but it's also necessary to face the facts.

Through learning and educating ourselves, we can feel prepared and find ways in which we can help, no matter how small it may feel. Though, let's be real: If a glacier melts and drowns Los Angeles, I'm hoping The Rock will be there to save everyone a la San Andreas.