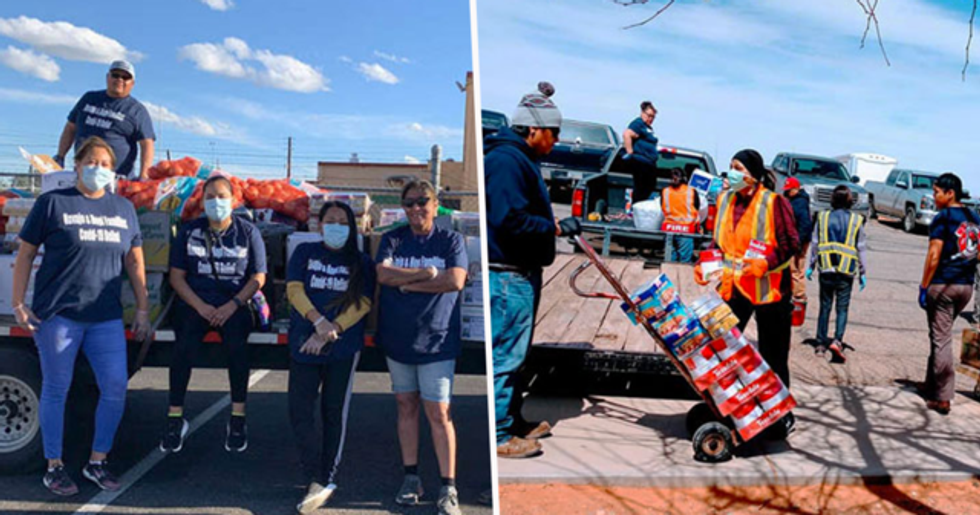 Native Americans Sent Ireland $170 as 1845 Famine Aid, Now Ireland Has Given Back With $3.1 Million Coronavirus Fund

As a thank you for their kindness over 100 years ago, the people of Ireland have banded together to donate millions of dollars to a Native American tribe.

Keep scrolling to read the remarkable history of this friendship, and to hear about the current efforts to help the struggling tribe...

175 years ago, Ireland found themselves in quite the predicament.

The country was in the midst of what is today known as the Great Irish Famine, or sometimes the Irish Potato Famine.

It was a devastating period of disease and starvation...

And, lasting for over 4 years, the famine led to over 1 million deaths, mass emigration, and a permanent change to the country as we know it today.

It was a dire situation.

But, little did the Irish know, help was on its way, and it was from the most unlikely of people.

A Native American tribe had extended a helping hand.

A tribe from current-day Southeastern US territories had somehow heard about the ongoing famine and decided to help out their transatlantic friends.

The tribe had actually endured something similar themselves.

Years earlier, around 60,000 Native Americans were gathered by the government and were forced out of and relocated from their ancestral homelands.

The Cherokee people called this journey the "Trail of Tears," because of its devastating effects.

An estimated 4,000 Native American's died while journeying the "Trail of Tears", mainly as a result of starvation, disease, and exhaustion on the forced march.

So, upon hearing about the dreadful conditions in Ireland...

This particular tribe sympathized and decided to help out as best they could.

The tribe managed to gather together some money...

$170, to be precise. And they sent it over to the Irish in a bid to end the devastating starvation.

And it undoubtedly helped a lot across several starving communities.

And, on top of the financial help, it was also an amazing gesture of kindness and solidarity.

Back then, contact and communication across the Atlantic were limited, and the 2 countries had had barely any contact with each other at this point.

The Irish have evidently remembered the kindness of the tribe, and have decided to give a little back.

During the ongoing medical pandemic, 2 Native American tribes are struggling.

The Navajo & Hopi tribes currently have a high number of elderly, diabetic, asthmatic, and cancer-afflicted residents and, when the current virus came along, they only began to struggle more.

Forty-four people across the tribes have died as a result of the virus...

And several more are seriously unwell.

But the Irish are coming to the rescue.

To pay back their debts from the famine, a group of grateful Irish citizens has decided to start a fundraiser to help the tribe during these difficult times.

Quickly, donations to the tribe began to flood in...

And, remarkably, the organizers soon began to notice a trend across the donations.

Primarily, people with traditionally Irish names were sending in donations...

And leaving comments such as, "We will never forget your kindness," “From Ireland with love," “Returning the kindness and grace shown to us during the famine," and, “Happy to repay a debt owed by Ireland."

The people of Ireland have evidently not forgotten the kindness of the tribe all those years ago.

Native Americans raised a huge amount in famine relief for Ireland at a time when they had very little. It's time f… https://t.co/AJxGVHRQLu
— Naomi O'Leary (@Naomi O'Leary)1588449509.0

The donations have continued to pour in, and it didn't take long for it to reach $1 million.

And now, as it stands, the fundraiser has reached over $3 million from over 59,000 donors.

It is truly remarkable.

People have been donating more than just money, too.

Non-perishable foods, and sanitary products have also been donated to the struggling tribe.

You can watch a video about the full fundraiser here.

My faith is officially restored in humanity. For more uplifting stories from this pandemic, keep scrolling to read about the generous donation made by Greta Thunberg...