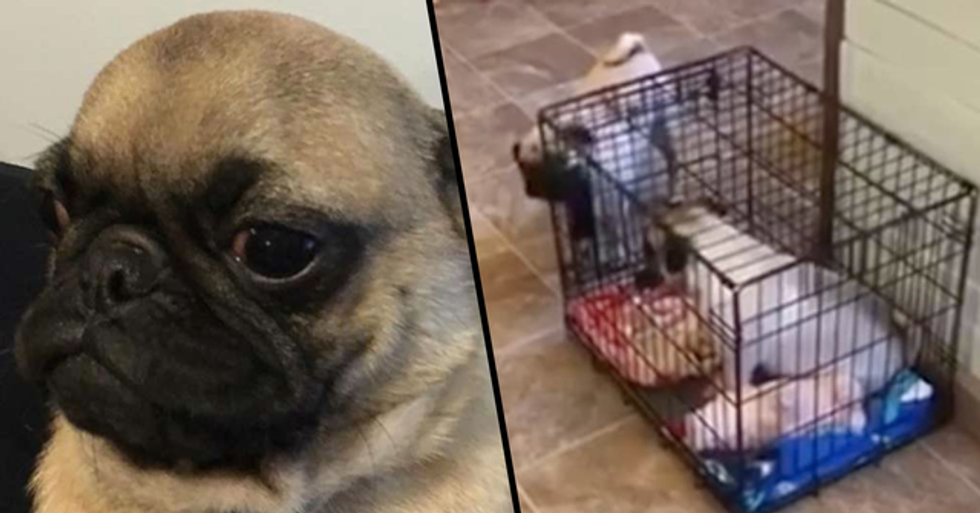 Naughty Pug Discovers How to Lock His Sister in Her Crate

A rather cunning pug has gone viral after he was caught, red-handed, locking his big sister into the very cage that she had once busted him out of.

It all sounds very confusing, I know. But it's one hell of a tale, let me assure you.

Keep scrolling for the full story, and to find out just how this mischevious little pooch managed to pull off such an accomplishment.

This duo could perhaps be the most mischevious pair of pugs in the world.

Though they were rescued at different times...

The pair were quick to become inseparable, and Elphie wasted no time in stepping into her "big sister boots".

Elphie was always on the lookout for her little brother...

And, in typical big sister fashion, she knew how to get him into trouble, too.

While their owner, Andrew Nechetsky was out, Elise would sneakily release her little brother from the crate that he would be locked in as a precautionary measure.

When Nechetsky and his wife would go out, they would secure Sizzle in a little crate...

“I leave for work before my wife does, and she would always put him in the crate as he was only a puppy," Nechetsky told The Dodo.

And Elphie was always separated from her little brother...

As not to pester him while he was locked in his crate. “We would put a gate in between the kitchen and the hallway so Elphie wouldn’t bother him while we were gone."

However, upon arriving home...

Nechetsky would find Sizzle roaming around the house, free from his crate.

At first, he assumed that his wife had simply forgotten to lock the crate's latch...

But they were quick to realize that Elphie was the culprit behind Sizzle's escapes.

It turns out the pooch was smarter than she looked...

And had somehow figured out how to unlock the crate and release her brother.

Elphie had curated her own little escape method.

“We learned that she figured out how to climb over the gate," Nechetsky said, “and she would then let him out of the crate."

Following his discovery, Nechetsky stopped locking Sizzle in the crate...

Because what was the point if his big sister would just bust him out anyway?

But then, there was a major plot twist.

A couple of weeks into their new arrangement, Nechetsky arrived home to a new mystery.

Yes, the very crate that she had once busted him out from. I have so many questions.

A dog can quite easily let itself into a cage, right?

Well, this crate couldn't be locked from the inside...

And Elphie was quite firmly locked inside the crate upon Nechestsky's arrival home.

It was a complete mystery.

“I started coming home from work and I’d open the front door and hear her crying. I walk into the kitchen and see her locked in the crate," Nechetsky explained.

“I honestly couldn’t, for the life of me, figure out how she got in there."

He then decided to investigate...

And began to secretly film the pair when they thought they were alone.

And what he saw shocked him...

Because Sizzle was now locking his big sister up in his cage, and he had the initiative to use her favorite toy as bait. What a bad, but very clever boy, Sizzle!

Sizzle used a very cunning method to lock up his sister...

“I see him open the crate, then he walks away and grabs a little pig toy and he puts it in the crate," Nechetsky said. “He walked away and waited, she went looking for her pig, saw it in the crate, walked in and sat next to it." "Then he closed the door and used his mouth to latch it shut. It blew my freakin' mind."

Sizzle went on to re-offend by repeatedly locking up his sister. And, when Nechetsky showed his wife a video of Sizzle’s trickery later that day, they decided to get rid of the crate once and for all. The relationships between our dogs are simply adorable, especially between those who bond in animal shelters. Keep scrolling to read the heartwarming story of the unlikely friendship between 2 rescue pooches...