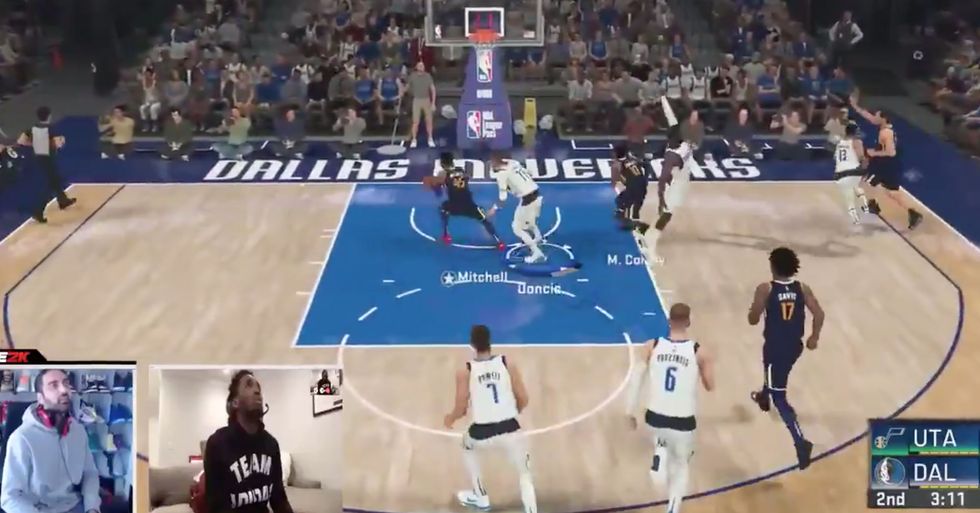 The sports world has been hit hard by coronavirus. The stadiums are shut, tumbleweeds gust through our arenas, and we have no live games on our TV's.

NBA stars have even taken to social media to encourage kids stuck at home to practice new skills.

It's an unpredictable time, to say the least. But the NBA hopes to fill this new void in our lives by coming up with the best solution.

ESPN has resorted to replaying recent basketball games, but soon they'll have to dip into the archives for games broadcast in standard definition. I know... things have gone too far.

NBA and WNBA stars have taken to social media during this frustrating time.

They're encouraging youngsters in coronavirus lockdown to sharpen up their skills.

Schools and gyms are closed.

But there's nothing stopping kids or adults, bouncing a ball outside or indoors, to keep the spirit of the game alive.

Devonte Graham of the Charlotte Hornets and the Seattle Storm’s Jewell Loyd has got involved.

These two are among a number of top stars who have produced a series of video clips for drills that you can try at home.

The players want to see you in action.

Due to them being out of action, it's a way of them encouraging those to take part in learning new skills and sharing the clips with the stars.

All sports networks are struggling.

With ESPN resorting to posting about The Rock's cheat day.

Things are getting pretty dire.

But they have pushed up the release of the highly-anticipated Michael Jordan documentary The Last Dance to April.

They have even started reporting on things outside the realm of sports.

I know we’re all struggling without sports which means you’re struggling for content but wtf is this @espn… https://t.co/RiW9P0LqMk
— David Lawrence (@David Lawrence)1585508460.0

And people aren't happy about it. Keep scrolling to see how they plan to keep the NBA alive...

Until now the NBA had suspended play, but this could change.

According to Yahoo Sports' Chris Haynes, the NBA has plans to launch a players-only NBA 2K tournament.

It will in theory be made up of the best gamers in the league.

This is obviously due to the coronavirus outbreak that has halted basketball and all other forms of sport for the foreseeable future.

The virtual games will be broadcast by ESPN.

The league is hoping to get this event launched by Friday.

It hopes to get some big-name players to take part.

This has happened before, as 4 MLB players faced off against one another in a The Show tournament on Friday.

This was originally supposed to be the opening weekend of the basketball season.

With that said, the new NBA one sounds more official and much larger in scale.

Fans of all sports are hoping for better contingency plans going forward.

Especially since the federal government stated their intent to push back social-distancing measures to April 30 at the earliest.

This puts all future games in jeopardy.

The league intends to have a player from each team serve as a representative.

But they have yet to finalize tournament details.

The idea is that the tournament could offer fans a different way to fill in those competition withdrawals.

Anyone who's tuned in recently knows.

ESPN could really use some help right now. Let's hope it can hit the spot for all basketball lovers out there. Keep scrolling to see why there's been a surge in people playing Wii Sports...