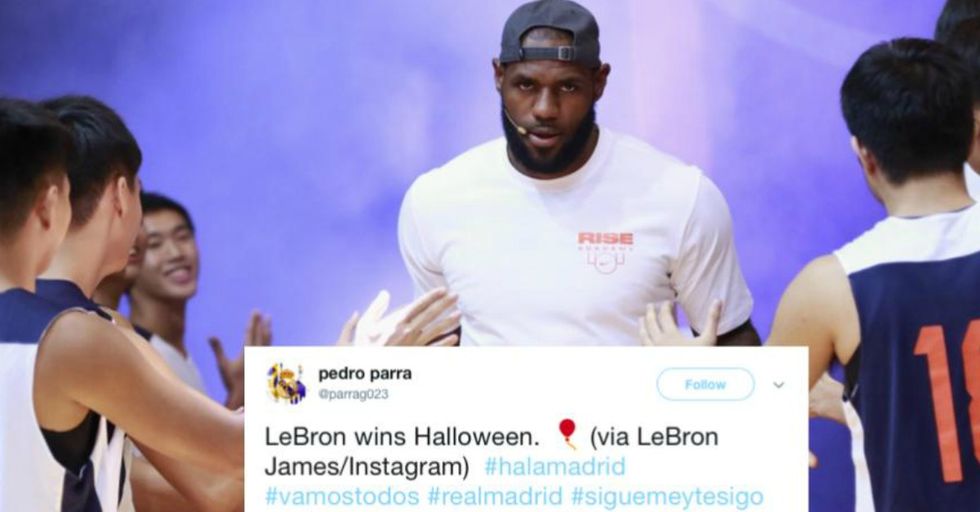 We all know LeBron James is a beast on the court. The four-time MVP and two-time Olympic gold winning former Rookie of the Year (yes, the guy literally has more sports titles than the Kardashians have sisters) absolutely dominates when he's on the basketball court, which is why he is one of the most dominant sports figures in history.

But did you know he had a scary side too?

On Monday, James shared a picture from his annual Halloween party.

He wore a white doublet (at least that's what we think that top is called) with red buttons, and his size 15 shoes had red puffs on them. His face was eerie white and his teeth were sharp as knives.

He was Pennywise the Clown in the flesh.

And he was completely unrecognizable. James captioned the image "Georgie! Georgie!" – a callback to the opening scene of It, where the titular monster lures poor Georgie down the drain.

But James wasn't done yet.

He walked through the party, doing his best Pennywise the Clown dance, handing out red balloons and frightening party-goers.

After all, if you saw a 6'8" Pennywise the Clown coming at you, how would you feel?

We definitely wouldn't be able to handle it. Pennywise is legit the scariest fictional creature of 2017. Of course, we say fictional because 2017 is scary enough in real life.

This isn't the first time James has won Halloween.

Remember he was Prince in 2015, complete with Purple Rain blouse and guitar, and he even sang his own version of it. Keep on winning, LeBron, keep on winning....