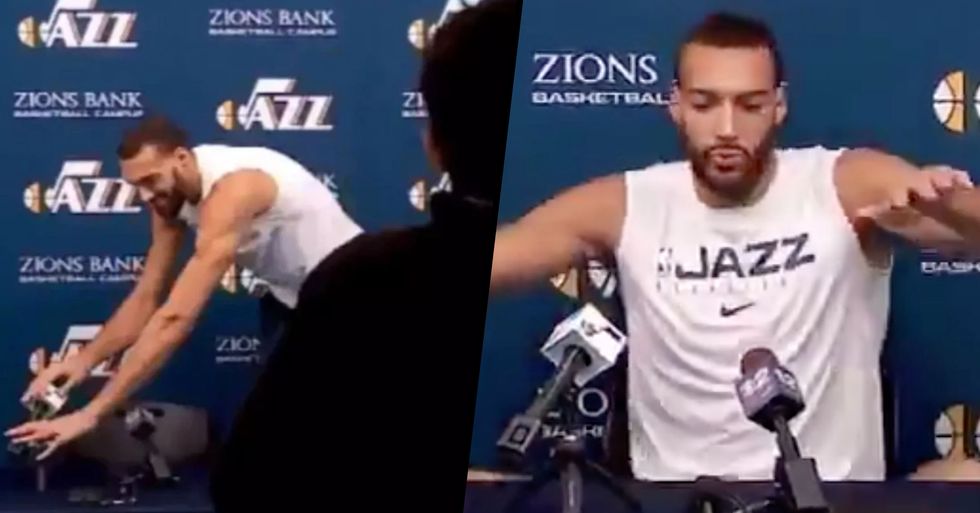 Hundreds of thousands are currently infected with the virus and now, Rudy Gobert has tested positive for the virus just days after he jokingly touched all the mics at a press conference.

Keep scrolling to hear what Rudy has to say...

It has been confirmed by Worldometer that 5,123 people have now died globally, with the majority being in mainland China. A further 140,000 have been found to carry the virus and be infected.

News recently broke that world-famous actor Tom Hanks and his wife have tested positive for the coronavirus.

The sixty-three-year-old took to Instagram to reveal the news on Wednesday after the pair have been spending time in Australia for production of Baz Luhrmann’s untitled Elvis Presley movie, in which Hanks is playing Presley’s iconic manager Colonel Tom Parker.

But Hanks isn't the only one...

More news has just come through that an NBA player has been tested positive for the coronavirus.

The league announced that it would be suspending action in a statement yesterday (11th of March) which read, "The NBA announced that a player on the Utah Jazz has preliminarily tested positive for Covid-19. The test result was reported shortly prior to the tip-off of tonight's game between the Jazz and Oklahoma City Thunder at Chesapeake Energy Arena."

The NBA is taking this matter very seriously...

"At that time, tonight's game was canceled. The affected player was not in the arena. The NBA is suspending gameplay following the conclusion of tonight's schedule of games until further notice. The NBA will use this hiatus to determine the next steps for moving forward in regard to the coronavirus pandemic."

We must say, Rudy kind of brought this on himself...

This shocking news has come just days after the NBA star jokingly touched all the microphones during a press conference, appearing to attempt to make a statement about the "overreaction" to the coronavirus outbreak.

Rudy's behavior during the conference didn't go down too well with fans...

This is the video of Rudy Gobert touching all the microphones and potentially infecting innocent people with Corona… https://t.co/Yap51pBLGM
— Abdul Memon (@Abdul Memon)1583976320.0

And especially now he has tested positive for coronavirus.

Prior to the media conference, the press had been banned from accessing locker rooms which meant players were required to fulfill their media obligations at the podium...

This was when Rudy decided to fondle all the mics, which is clearly something that will now follow the basketball player for a very long time.

This is a staggering hit on the NBA...

And Rudy is more than aware of the situation he has landed himself in.

The basketball player took to Instagram to address his fans...

"I want to thank everyone for the outpouring of concern and support over the last 24 hours. I have gone through so many emotions since learning of my diagnosis…mostly fear, anxiety, and embarrassment," he started by saying.

He wants to make a public apology...

"The first and most important thing is I would like to publicly apologize to the people that I may have endangered. At the time, I had no idea I was even infected. I was careless and make no excuse. I hope my story serves as a warning and causes everyone to take this seriously," Rudy said.

He wants to educate others about the pandemic...

"I will do whatever I can to support using my experience as a way to educate others and prevent the spread of this virus," he explained. "I am under great care and will fully recover. Thank you again for all your support. I encourage everyone to take all of the steps to stay safe and healthy. Love."

Not everyone has been criticizing the NBA player...

On the Rudy Gobert microphone incident: at the time, I actually took it as a measure of support for the media. We w… https://t.co/JiOdLEgyn4
— Andy Larsen (@Andy Larsen)1583987770.0

The Salt Lake Tribune’s Andy Larsen tweeted thought the joke was "a measure of support for the media."

Rudy isn't the only Utah Jazz player to be tested positive...

Donovan Mitchell revealed via Instagram that he too had tested positive for the virus, writing, "Thanks to everyone who has been reaching out since hearing the news about my positive test. We are all learning more about the seriousness of this situation and hopefully, people can continue to educate themselves and realize that they need to behave responsibly both for their own health and for the well being of those around them."

We wish the guys a speedy recovery...