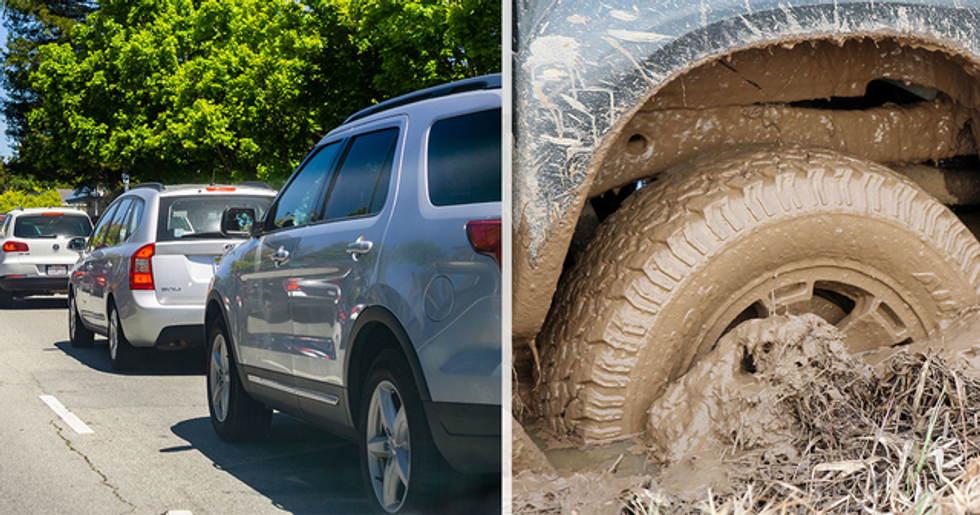 Driving. It can be one of the more stressful experiences in life, can't it?

Throw in traffic jams, malfunctioning GPS systems, and thick mud and you have yourself a very messy recipe for disaster, my friend.

A group of unfortunate drivers in Colorado found themselves in an ugly situation last week when a car crash caused them to be detoured... To an empty field. Covered in thick, bog-like mud. As you can imagine, the scenario was quite ridiculous, and drivers found themselves stuck in the swamp-like conditions.

I'm still trying not to laugh... Keep reading to see the full extent of the situation. It's really quite silly.

Driving isn't all fun and games.

When I was younger, I dreamed of having my own car. Being able to freely drive to and from wherever and whenever I wanted... What could ever go wrong?

Well, the reality certainly hasn't lived up to the dream.

It turns out that driving a car alongside hundreds of other commuters every day isn't actually that fun.

It can be pretty damn stressful.

That's putting it lightly. Instead of the long, soothing drives through rolling countrysides that I had once envisioned, I find myself trapped in an angry queue of other cars and rolling my eyes at other people's terrible driving on a daily basis. (My driving is really good, though...)

Though it does have its perks...

Because you and your friends can't headbang to "Bohemian Rhapsody" on the bus, can you?

Regardless of all the headbanging, cars can cause some serious damage.

(Maybe caused by all the headbanging...) there have been some serious car crashes in the past.

And collisions can bring traffic to a complete standstill.

And it's usually complete chaos. Traffic jams bring everyone involved to a complete gridlock and people can be stuck in their cars for hours on end.

And what do you do when you need to be somewhere?

We've all been there. You're in a rush, the clock is ticking... And the traffic just isn't moving.

Luckily, most people are able to find an alternate route.

With GPS technology, anyone who is anyone owns some form of Satellite Navigation system. Drivers, at the click of a button, can magically reroute themselves out of most traffic jams.

But this doesn't always go to plan.

And hundreds of drivers in Colorado found this out the hard way when their GPS systems took them down the complete wrong route, leaving them stranded in the middle of nowhere.

Dozens of drivers were on their way to Denver International Airport at around 7 pm last Sunday. So far, so good.

However, there was a car accident.

Thankfully, no one was reportedly injured. But dozens of drivers found themselves on a now closed off road due to the accident, which happened on Pena Boulevard, and there was no longer any access to the airport on that road.

In the hope of finding a quicker route, drivers turned to their GPS systems.

Connie Monsees, who was on her way to pick her husband up from the airport, spoke to The Denver Channel about the incident. She said, “Google Maps asked us to take the Tower exit, so I did because it was supposed to be half the time."

The new route was estimated to take twenty-three minutes.

Connie followed the detour down E. 64th Ave. Eventually, the street turned into a dirt road before intersecting with Jackson Gap Road. Though it was looking odd, Connie said that there were several other cars both in front and behind her following the same route, so she continued.

From detour... To disaster.

Once the cars hit the dirt road, there was no turning back. Though it was a sunny day, there had been heavy rain over the weekend which had subsequently turned the road into a swampy mess.

Connie, along with the other drivers, found herself stuck.

In total, around one hundred cars formed a line on the road and got stuck behind a couple the few cars that couldn’t make it through the mud. On top of all the mud, there were two areas in particular where the road had a deep ditch that was nearly impossible for cars to cross.

And she couldn't even make a U-turn...

Because she would have ended up stuck in the field, as the road was only narrow enough for one line of cars. According to Connie, there were some drivers who attempted to drive around the stuck cars but didn’t see the ditch and hit it hard, sending their cars flying. What a literal mess.

Though this situation does beg the question...

What the heck was Google Maps doing sending those people out there?! Connie said, "The question is why did Google send us out there, to begin with? There was no turning back once you were out there."

Luckily, Connie made it to the airport.

Her car has four-wheel drive, which is ideal for off-road conditions. Connie had to take a few desperate drivers with her, though. “I tore up the inside passenger wheel well for my tire, but it’s not that big of a deal compared to some other people who really tore their cars up and got themselves stuck out there," she said.

The area is bracing itself for more construction in the future...

So, eventually, there may be paved roads and, ultimately, less stuck cars.

Though this does highlight an issue with our dependency on technology...

Denver7's traffic anchor, Jayson Luber, noted that people may be becoming too dependent on their smartphones when driving and getting around. “You are driving. Google Maps is not driving," He said. “Google Maps is not perfect. You need to know where you are going and, if it does not look like that’s where you should be going, turn around and try again." Moral of the story? Google Maps is evil and not to be trusted. Simple as.