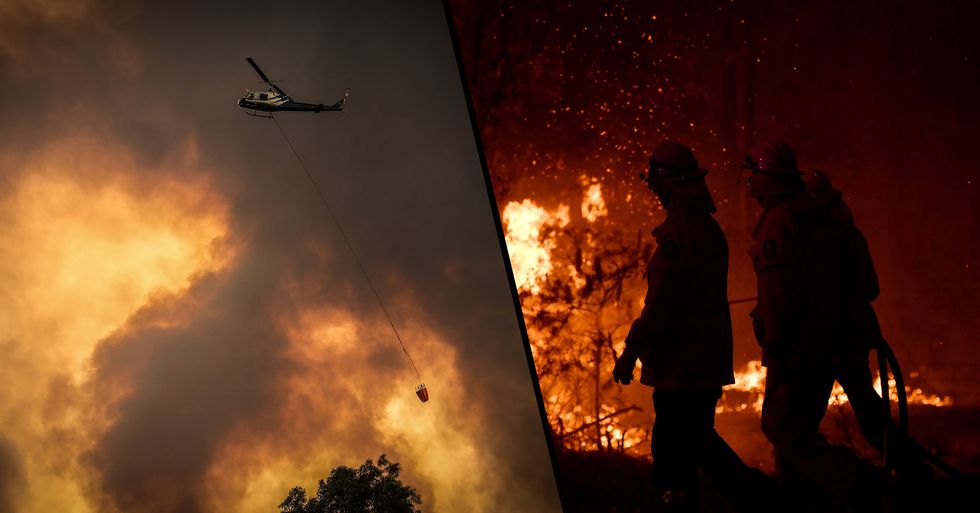 More Than 180 People Arrested for Deliberately Lighting Bushfires in Australia

Unbelievably, it seems some of these fires have been started deliberately. Keep scrolling to get the full story including the sentence the culprits could be facing.

The BBC reported that over 100 bush fires continue to burn in populated coastal and inland regions to the city's north.

But it turns out that some of these devasting blazes have been started on purpose.

Why anyone would do such an unthinkable thing is baffling, but, according to state authorities, arrests have been made this week in relation to 205 bushfire-related offenses.

Shockingly, it is believed that eighty-five percent of bushfires are caused by humans.

According to Dr Paul Read, co-director of the National Centre for Research and Arson: "About 85 per cent are related to human activity, 13 per cent confirmed arson and 37 per cent suspected arson."
"The remainder are usually due to reckless fire lighting or even just children playing with fire, " he told ABC.

So far, 183 arrests have been made in Queensland, New South Wales, Victoria, South Australia, and Tasmania since November last year.

In New South Wales alone, which is one of the hardest places hit,  twenty-four people have been charged with deliberately lighting bushfires, along with fifty-three individuals facing legal action for allegedly failing to comply with a total fire ban. Keep scrolling to learn about what their punishment will be.

Many of the alleged culprits are juveniles.

Police stated that 103 fires in Queensland had been started on purpose, with 98 people, 67 of whom are juveniles, identified as the offenders.

Failing to comply with the fire ban can land you in serious trouble.

Anyone caught lighting a fire during a total fire ban could face up to 12 months in prison and/or a $5,500 fine. Individuals seen lighting a tobacco product within fifteen meters of a stack of hay, grain, corn, or any standing crop could also face a fine of $5,500. But of course, for those accused of arson, it's a whole different story...

Offenders may be in for some hefty prison time.

Crimes relating to lighting bushfires carry a sentence of up to 25 years in prison for damaging property with the intention of endangering, and 21 years in prison for starting a bushfire and being reckless as to its spread, under the New South Wales Crimes Act, the Rural Fires Act and Rural Fires Regulation, Ladbible reports. To learn more about the bushfire crisis, keep scrolling to see the harrowing pictures that truly sum up the devastation. This is so heartbreaking...