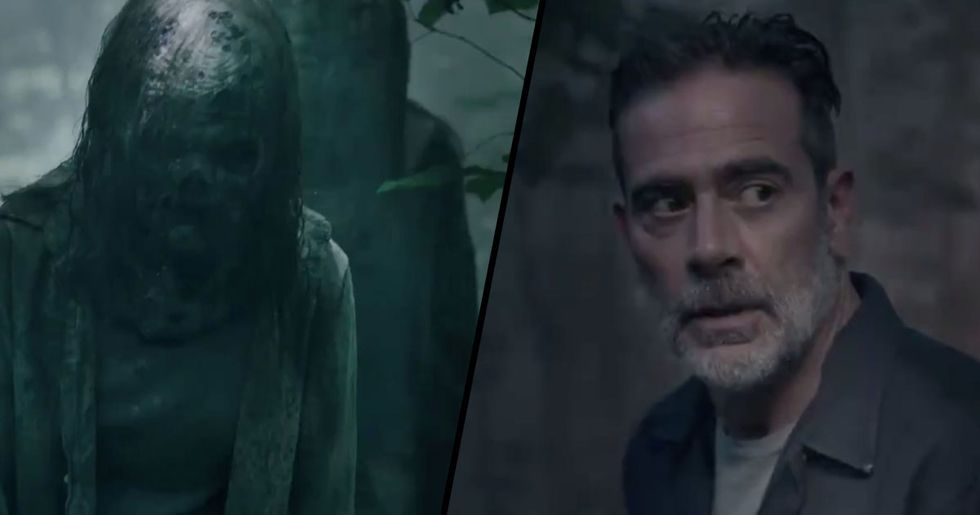 Negan Joins The Fight Against The Whisperers In New ‘Walking Dead’

It's been 9 years since the horror-series, The Walking Dead, hit our screens, and, in that time, it's built up quite a substantial fanbase of dedicated viewers who keep coming back for their zombie-related horror fix.

Following a snowy season 9 finale, where we watched Negan and Michonne discuss that having a common enemy and a common goal is the same thing as, in her words, evil bringing “good people together,” fans will be pleased to know that the drama is back very soon.

In the lead up to the new season, AMC has just dropped the official season 10 teaser and it looks like it's going to be a big season indeed.

Here's everything you need to know about The Walking Dead Season 10, including one very important plotline.

The post-apocalyptic zombie-themed horror series had us gripped to our screens as we watched a full-blown zombie apocalypse unfold in front of our eyes.

The series is based on the comic book by Robert Kirkman.

The series portrays the weeks and months following a zombie takeover and follows a group of lucky (or unlucky) survivors attempting to stay alive and find secure shelter in a world wherein death could be around any corner.

The group is led by former police officer, Rick Grimes.

The Sherrif, who was shot in the line of duty, wakes from a coma to find out that the world is in the midst of an apocalypse. Imagine waking up to that.

He travels to Georgia to try to find his family.

After eventually reuniting with his wife, Lori, and son, Carl, with the help of best friend, Shane Walsh, he discovers a group of survivors and finds himself taking on the role of leading the group to a safe haven.

But, of course, it isn't all plane sailing.

From the death of Lori to the war against Negan, it's a hard battle to stay alive for the former police officer and his group.

The show went down extremely well with fans.

Rewatching Season 1 of The Walking Dead and man, I still remember why it's my favorite show. Such a good series!!
— TSM TannerSlays (@TSM TannerSlays)1506998426.0

And it had the ratings to show for it, with an estimated 6 million viewers tuning in to watch the first season.

Its profound success also earnt the franchise a spinoff.

In 2015, the show's spinoff, Fear The Walking Dead, hit our screens, and with open arms - the premiere second season was the most-watched thing on Sunday on cable and broadcast.

The zombie franchise has garnered a mammoth fanbase.

Whether its fanfiction, dedicated fan accounts, or simply those eagerly on countdown each year for a new season, there's no doubt that the show has found its niche audience.

The show is also a fan-favorite at Comicon.

The cast are regular attendees at the annual convention, with hundreds of fans, some cosplaying their favorite characters, flocking to the event to watch the panel.

It's been on our screens for a total of 9 seasons.

Just like clockwork, each year, fans get a new season of the show, with the saga continuing across a lengthy number of seasons.

And, now, the show has been renewed for a tenth season.

Despite its dwindling viewing figures, AMC still firmly believes in the show, as its tenth season is set to air very soon.

Chief content officer, Scott Gimple, believes that it's got even more life left in it.

Gimple, who was a showrunner for the franchise from season 4 to 8, now the chief content officer for the show, believes they can squeeze a staggering twenty more seasons out of the horror show. Woah. That's a lot of episodes.

There are lots of changes heading our way for season 10.

But, first, let's quickly recap what happened during that action-filled season 9 finale.

By the season 9 finale, winter has well and truly set in.

It's snowy-season in The Kingdom, and Michonne, along with a few others from Alexandria, are helping its citizens migrate to Hilltop, but the journey required crossing over into Whisperer territory.

Meanwhile, back at Alexandria, Rosita, Eugene, Gabriel, and Sadiq leads the populace into a safer, and warmer part of the settlement

But, when Judith gets lost amidst the storm looking for Daryl’s dog, Negan is there to rescue her and, once Michonne returns from the migration (which manages to succeed without any death,) she considers letting him live freely in Alexandria.

After Winter has passed, “Kingtop" is now in regular contact with Alexandria.

But we are left on a major cliffhanger, when, after Ezekiel leaves the room following talking with Judith, a mysterious voice comes on the radio. “Hello? Can you hear me? Is anybody out there?" the voice pleas. We were left in the dark when it came to the identity of the person, as the credits begin to roll before we've barely even had a chance to think about it.

So, now we've refreshed your memory, here's what's in store for the upcoming season:

AMC has just released the official synopsis for the season, and it looks like there's going to be big changes in store. Keep scrolling for all the details, including when you'll be able to watch.

Season 9 killed off a lot of characters, so we'll expect to see some new additions.

One of which will be comic book character Dante, played by Juan Javier Cardenas. His character is described as a "rogue and fast-talking individual", and is said to be heavily involved in the story of Alexandria in the upcoming episodes.

As for the plot, Gimple has previously said the show will explore more "original" storylines.

So it looks like the new season will be steering away from its comic book roots. We'll also see a time jump during the season.

Season 10 is set in Spring, a few months after where we left off in season 9.

According to the official synopsis, "The collected communities are still dealing with the after-effects of Alpha’s horrific display of power, reluctantly respecting the new borderlines being imposed on them, all while organizing themselves into a militia-style fighting force, preparing for a battle that may be unavoidable."

The future of civilization hangs in the balance.

"The Whisperers are a threat unlike any they have ever faced. "Backed by a massive horde of the dead it is seemingly a fight they cannot win. The question of what to do and the fear it breeds will infect the communities and give rise to paranoia, propaganda, secret agendas, and infighting that will test them as individuals and as a society," the synopsis reads. "The very idea of whether civilization can survive in a world filled with the dead hangs in the balance."

AMC just released the official teaser for season 10 and it seemingly confirms that Negan will be joining the fight against the Whisperers.

The teaser shows all of the main characters, including Negan, coming together.

Following a series of slogans including "The future is ours, so long as we hold on to our faith in one another," and “We stand together for life, not death, in this new world," all of the main characters, including Negan, come together and say: "Together, we silence the Whisperers."

Fans were very impressed with the teaser.

@WalkingDead_AMC *STANDING OVATION* 🙌 This is one of the most spectacular and spellbinding promotions in the entire… https://t.co/yEWU2f4zfu
— Sarah J. Crist (@Sarah J. Crist)1567100534.0

Like this one, who spoke very highly of the new promotion, describing the teaser as the most "spectacular and spellbinding" ever.

So, when will the new season air?

You won't have to wait long, as The Walking Dead Season 10, will premiere on Sunday, October 10 on AMC. Meanwhile, if you're looking for a new series to binge while you wait, we've got you covered. Keep scrolling to reveal the best shows out on Netflix right now.