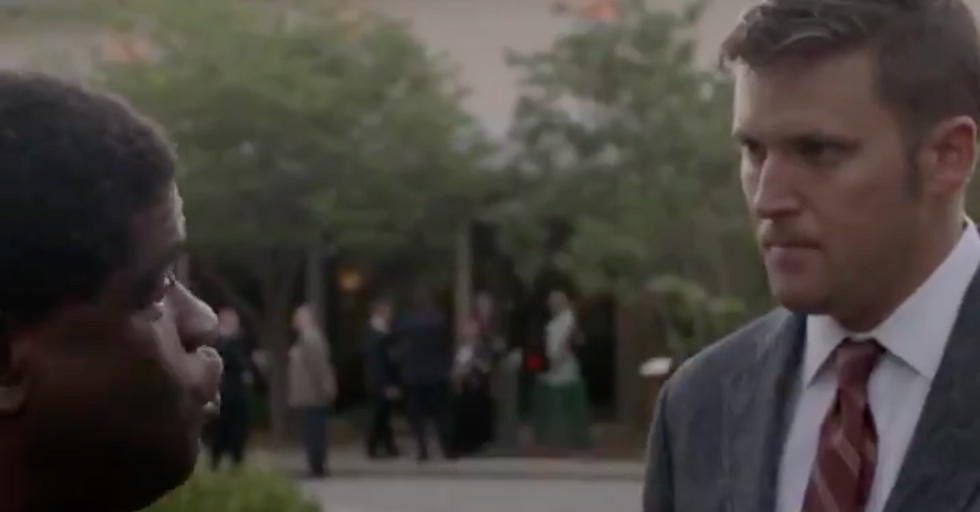 Richard Spencer is a man who is trying to make being an actual Nazi cool again by championing racism in a bad hipster haircut and pretending he doesn't want to murder everyone. Gary Younge is a British journalist who decided to interview him to better understand the rising tide of far-right politics in America. Younge is black and Spencer is a Nazi, so, as one might expect, things didn't go too smoothly.

Gary Younge is the kind of journalist who makes the rest of us realize just how hard being a journalist really is.

In Manchester? I'll be giving the Arthur Lewis lecture on Thursday at 6pm. Come Along https://t.co/qvGzQxhCxF
— Gary Younge (@Gary Younge)1510059527.0

He wanted to know more about the rising influence of the far right in America, but struggled with how to interview Spencer without validating him or his views. This is because Younge is someone who is capable of introspection and rational thought, and seems to care about the effect he has on the world at large.

Richard Spencer, on the other hand, is just a guy with a bad hair cut and even worse ideas.

As have many mediocre white men before him, Spencer has found a niche "career" peddling basic racism as though it's some kind of intellectual revelation. He seems to have just figured out what many spectacularly subpar humans discovered long ago: that racism is easy and acting like your skin color is an accomplishment can allow you to feel pride without actually having to, you know, accomplish anything. Because that would require work, which can be a real bummer for wealthy white kids who've never had to pay their own bills.

Spencer's one "accomplishment" seems to be helping to found the alt-right, which is why we're forced to know who he is.

your semi-regular reminder that richard spencer is a dumb herb who thinks he’s smart because he wears ties and grif… https://t.co/pmQah3p6bO
— b-boy bouiebaisse (@b-boy bouiebaisse)1510059490.0

And by that we mean he literally started a website called "AlternativeRight.com" and insists he's the first man to have come up with that term. He was then hired by another rich kid who never amounted to much on his own and together they set off to spread the idea that white people should get credit for being born. Because learning to treat people well and function in a diverse society requires a little effort — and a little effort is way too much work for these boys.

But even knowing all this, the interview went far worse than anticipated.

We were concerned about giving him a platform. We didn’t anticipate he’d bring the gallows & rope & finish the job… https://t.co/o8BsYwEftl
— Gary Younge (@Gary Younge)1510156946.0

Mostly because Spencer isn't actually that good at making racism seem fancy. He seems to just assume if you're a tall white guy in a jacket you can say literally whatever you want and it simply must be taken seriously. Have you seen his jacket, though? He has a jacket!

The interview got heated when Spencer decided to break the news to a guy named Gary Younge from Stevenage, Hertfordshire that he's "not really British."

Spencer tells Younge that he's "not really" British and asserts that he has the authority to say that because his name is Richard Spencer. Okay. Forget that Dick here grew up as a forgettable prep-school kid in suburban Dallas. He gets to decide who is British because he has a British-sounding name.

And just in case you didn't get it, Dick is here to re-explain it to you.

Going from declaring your English ancestry based on your name, to deciding you are, in fact, in charge of deciding who is British only makes any sense if your parents let you sleep next to a constantly running microwave. Though, to be fair, it took America awhile to figure out the dangers of microwaves.

Cue the mysterious Twitter girl with a cute profile photo who is overtly racist.

These are the microwave kids we have bad news for. Talking about being "ethnically British" and "replaced" isn't about a shared culture that's disappearing. Ancient Britons stopped being a thing in about the 5th century. Modern Britons come from a wide variety of cultures and backgrounds. There are even parts of the UK where people grow up with first languages that aren't English! And, as we can safely assume no one claiming "British ethnicity" grew up speaking ancient Celtic at home or burying dead family members in barrows, it's clear this is just a way to say "white person" that sounds fancy. This term has nothing to do with culture and everything to do with how much SPF you need. That's especially obvious when you consider it's being said to a man named Gary Younge. A name I guess Richard thinks is ... Italian? Maybe he thinks you accentuate the "e." Also maybe he's just really, really stupid.

He did seem put off by Gary's appearance.

But we don't need to read facial cues to understand Dick Spencer is a racist. We can just listen to him talk. In the interview, he goes on to say that slavery was good for African Americans, because it brought them to America and spared them from living in Africa. A continent still recovering from the oppressive rule of these European ancestors Dick is so proud of. Because all his self worth comes from the crimes against humanity a bunch of people he isn't even related to committed a hundred years ago. He has that little going on for himself. Even his hair is a total mess in this interview.

As awful as the interview was, the fact that it happened at all is amazing.

Though it got heated, Younge showed amazing composure considering he was being told he didn't belong in his home country because of his skin color. It's hard to imagine the kind of bravery it must take to approach someone who doesn't recognize your humanity. It's even harder to believe Spencer has only been punched in the face once.

Younge's courage gave the world a cold, hard look at just who Spencer really is: Not a fancy intellectual, just a regular old racist goon whose parents could afford to send him to fancy schools.

But Younge's interview made plenty of people in his home country proud. See, this is how it's done. You work hard, you learn, you grow, you get good at something, and then you can be proud of having become an award-winning journalist and published author.

Or, you can write racist blogs for a wealthy benefactor while cashing in your trust-fund checks.

A path that will inevitably leave you with only two things to be proud of: your skin tone and some jackets. And, spoiler alert: anyone can buy jackets, guys.