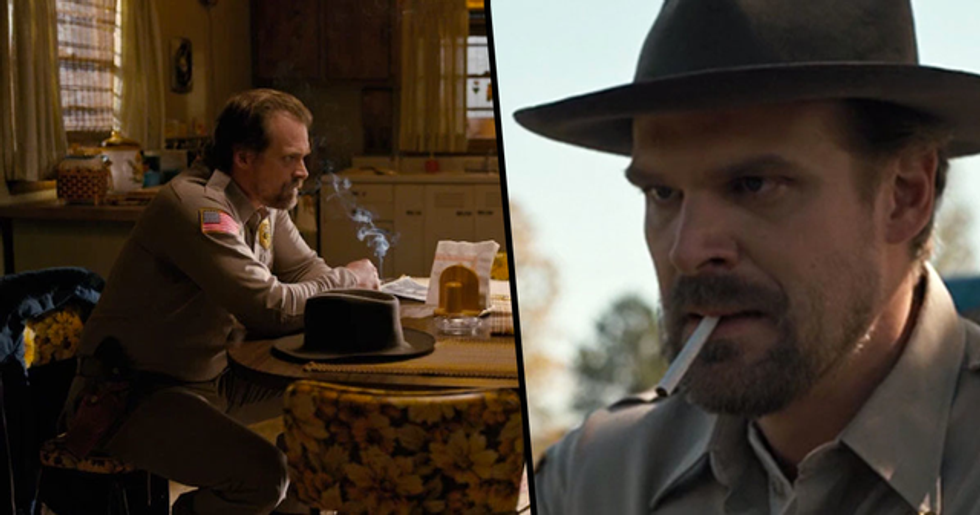 This year's 4th July brought with it the parties, the celebration of independence... Oh, and the third season of Stranger Things, of course.

The third season of the retro, sci-fi show has been highly anticipated, with the first 2 seasons being monumental successes around the world. Many Americans opted for a night of binge-watching the shenanigans of Dustin, Will, Lucas, Mike, and Eleven rather than having the usual 4th July celebrations. And it was brilliant.

However, despite the overwhelmingly positive feedback of the third season, Netflix has been flagged for a major issue concerning the amount of cigarette usage in the series. They have been criticized for featuring smoking too often and their new policy could change the way that the show, and many others to come, will be filmed in the future.

Stranger Things has taken over the world.

Created by the Duffer brothers, Stranger Things was first shown on our screens back in 2016. The show, which is set in the early 1980s, is an alluring mix of sci-fi, comedy, and, most poignantly, horror.

The show follows a group of friends on a dangerous mission.

When Will goes missing in his hometown of Hawkings, Indiana, his friends and family start the frantic search for him but begin to uncover secrets of a government lab, portals to another world, and sinister monsters from "the upsidedown" along the way.

They encounter some terrifying creatures on their journey...

Including this formidable-looking Demogorgon. When the portal to the parallel dimension, "the upsidedown," is opened, an array of ghastly creatures are released into the world. It just goes to show, opening a portal to another dimension is never a good idea, kids.

And it's down to Eleven to save the world.

Known only as "Number eleven" in season 1, Eleven is a psychic who's being held a prisoner in a lab, where experiments are regularly conducted on her. She has the ability to enter "the upsidedown" and, when she escapes the lab, she befriends Mike and subsequently helps to save Will and the rest of the world from the monsters lurking in the parallel dimension.

The sci-fi fantasy had people hooked from the get-go.

The captivating mix of horror and gore with comedy and fantasy was certainly a risk, but it was pulled off spectacularly. However, the second season brought with it a slight flop, with the narrative and overall plot feeling slightly dragged out. This was a mild disappointment compared to the roaring success of the first season, so the third was highly anticipated, to say the least.

But the Duffer brothers brought it back in full form.

Yep, season 3 was everything we dreamed it would be... And more.

The kids have grown up.

Now that the gang have entered their teenage years, they find themselves fighting with more than just monsters from a different universe... They are now fighting with their hormones. Though it follows the familiar Stranger Things plot (a new monster unearths, the kids fight together to save the world et cetera et cetera...), the third season portrays the once-childlike cast in a more adult and mature light, as they begin forming more mature and romantic relationships with one another.

Though the iconic retro theme was as poignant as ever.

Despite the fact that the show is massively based around chilling beasts and demons from a parallel universe, it has become resoundingly loved for its 1980s theme and setting.

The 1980s theme has become one of the show's trademark qualities.

From the cast's wardrobes to the soundtrack, everything about Stranger Things has a bit of '80s nostalgia to it.

And if there's one thing that everyone did in the '80s...

It was smoking cigarettes. A lot of cigarettes. So, of course, cigarettes are featured amongst the adult characters in the show quite frequently.

But there has been backlash.

Because we just can't enjoy something without a bit of controversy for too long, can we? The show has recently been criticized for its high use of cigarettes, with people arguing that it will encourage smoking amongst its younger audience.

It has been argued that cigarette exposure could be harmful to audiences...

The report focused on the fact that young people are much more likely to start smoking if they see their favorite characters doing it on TV. And the US Public Health Service has backed up this claim, stating that people with more exposure to tobacco in movies are twice as likely to pick up the potentially fatal habit. Because witnessing the characters smoking cigarettes is more harmful than watching them be eaten alive by monsters, apparently.

Netflix has come under fire for the volume of cigarettes featured in their shows...

And a survey conducted by the anti-tobacco group, Truth Initiative, found that Stranger Things is one of the worst offenders for the streaming platform's depiction of on-screen cigarette usage. Overall, Netflix's original shows were determined to contain 319 "smoking incidents." Stranger Things contained 182 such incidents.

That's an awful lot of cigarette use...

The report, which was titled “While You Were Streaming: Smoking On Demand," noted that all nine episodes in the second season of Stranger Things depicted some form of tobacco use. And, since the release of the third season, Netflix's depictions of smoking has tripled.

Though Stranger Things isn't the only offender...

According to the report, the runner ups behind Stranger Things are other popular TV shows available on the streaming service: Orange Is the New Black and Fuller House.

Netflix has been forced to respond.

They have introduced new rules regarding cigarette usage in their future shows and movies.

"Going forward, all new projects that we commission with ratings of TV-14 or below for series or PG-13 or below for films will be smoking and e-cigarette free — except for reasons of historical or factual accuracy."

Some people noted that Netflix's use of cigarettes could be harmful.

#Netflix must be making a ton of money from Big Tobacco #strangerthings #cigarettes #smoking All those smokers...no… https://t.co/lpyzqI3mh0
— DaTruth (@DaTruth)1510802500.0

It is odd that none of the characters have the delightful, hacking smoker's cough...

But some thought that the smoking simply captured the essence of the '80s.

Because, let's be real. Everyone smoked back then. Back in the '80s, there was no real knowledge of the negative effects of smoking, so it was a very common thing to smoke up to forty cigarettes every day. And Stranger Things has always been authentically '80s, so cigarettes are going to have to be featured in order for the series to feel realistic.

Though it's undeniable that smoking has a detrimental effect on a person's health and wellbeing, we can't change the past. And, in the past, cigarettes were seen as fashionable, not as a toxic and potentially deadly habit. So, when portraying this era in films and TV, it is authentic to include cigarettes, just to make the audience feel that like they're back in that time period. We haven't erased other awful historic events, so why should we erase these?