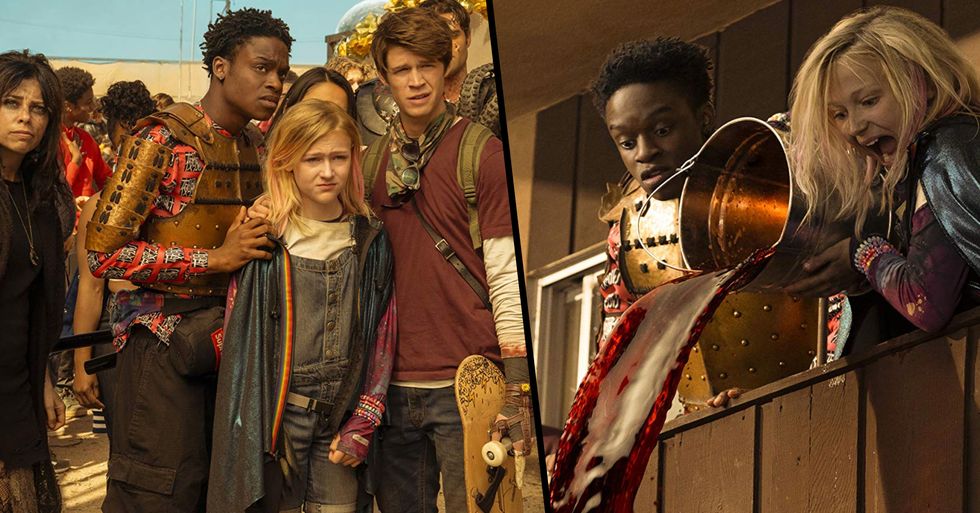 There's no denying that when it comes to binge-watching, Netflix truly reigns supreme. In the last few years, the streaming giant has dropped some of the most loved and addictive shows in the game - securing its position as a firm frontrunner in the streaming wars.

But sadly, some shows have a bleaker fate than others, and that has been the case with apocalyptic teen comedy, Daybreak. This week it was announced that the show has been canceled after just 1 season, leaving many people outraged because of 1 huge reason.

Over the last few years, the streaming giant has produced some of the best original content for us TV-hungry folk to get our teeth into.

But there are a handful of standouts that have garnered significant acclaim...

The streaming giant has dropped some major smash hits including the likes of Orange is The New Black, The Crown, and Grace and Frankie.

The hit sci-fi series currently holds the title for the most-watched TV series on the streaming app.

But, it's no secret that as quick as content hits the platform, things are taken off.

And in some cases, the streaming giant will make the big decision to cancel some of its series.

Sadly, this has been the case with zombie series, Daybreak.

The post-apocalyptic series hit the platform just 2 months ago and quickly amassed a cult following.

The premise may sound like a stereotypical zombie invasion...

But that couldn't be further from the truth - and that was part of its appeal.

Daybreak is set during the aftermath of a nuclear explosion that has wiped out everyone over eighteen.

The show centers on high school outcast, Josh, as he attempts to search for his girlfriend in a chaotic, post-apocalyptic Glendale.

On his pursuit, he's joined by a group of misfits, twelve-year-old Angelica, and his former bully, Wesley.

Josh and the group attempt to navigate a horde Mad Max-style in gangs to try to stay alive.

And when we say gangs we mean evil jocks, cheerleaders turned warriors... that kind of thing.

Oh, and there are zombies, of course.

Despite receiving mixed reviews, many people thought a second season was pretty much guaranteed...

In fact, at one point it was even reported that the team were already working on a second season, despite it never being confirmed by Netflix themselves.

But it looks like another outing won't be on the cards.

The streaming giant has made the risky decision to cancel it after just one season. It hasn't been a great few weeks for Netflix, who have stirred up controversy for a different show that resulted in a petition with a million signatures (find out more at the end).

The announcement was made on Tuesday.

Series co-creator, Aron Coleite, revealed the sad news on Twitter.
"We learned last week that Daybreak will not be returning for a second season."
"We're so sorry we couldn't share it with you sooner but also so grateful that we got to hang out in these last few live-tweet sessions with all of you."

Of course, fans were devastated.

It didn't take long for viewers to flock to Twitter to express their frustration at the controversial decision.

Some have hailed it a "travesty."

@AronColeite This is a freaking travesty. This had to be one of the smartest, most Now shows I've ever watched. I'm… https://t.co/Ph4DrLRODF
— Heather Harris (@Heather Harris)1576604517.0

With a select few even going far as to threaten to cancel their Netflix subscription.

There's no doubt that viewers haven't taken the news well, but there's one huge reason, in particular, why people are annoyed.

The show has previously drawn in praise for its inclusivity, including LGBTQ+ and POC characters.

The show's huge emphasis on inclusivity clearly had an impact on fans.

Making it all the more difficult to understand why Netflix would cancel it before it had even properly begun.

While the show's fate on Netflix has been sealed, there is some hope...

There's still time for another network to save the show. Fingers crossed! Daybreak season 1 is currently streaming on Netflix. This isn't the only controversial move Netflix has made in recent weeks. Over a million people have signed a petition against a certain Netflix show that's been sparking outrage online. Keep scrolling to find out why...