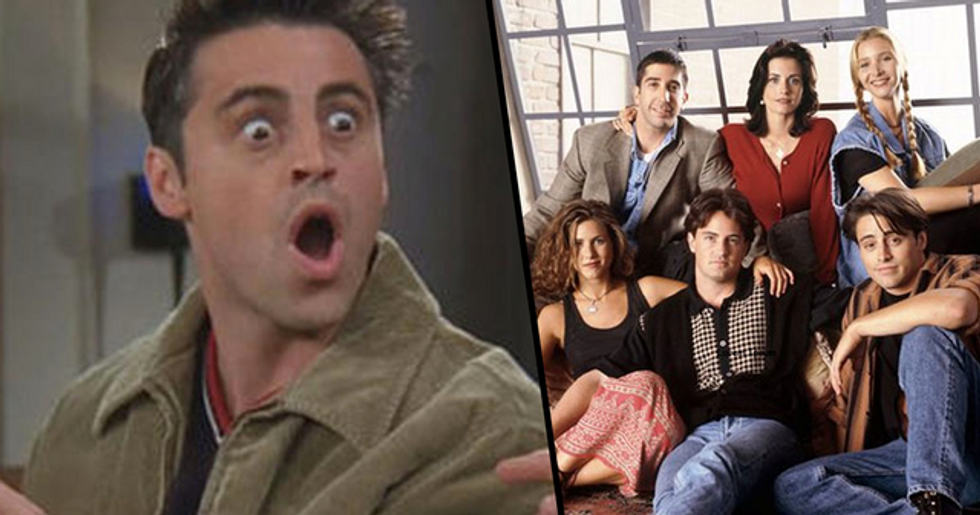 Netflix Confirm 'Friends' Will Not Be Removed

Your job's a joke, you're broke, your love life's DOA. And yet through it all, the cast of Friends  is there for you. Everything you're going through, they've all been through too, and they've survived.

Since Warner Bros. said that they will be starting their own streaming service, the internet has gone into over-drive with the idea that Friends will be taken from us. But do people still care? Is it still relevant? And is Netflix really keeping Friends?

That is brand new information.

Amidst months of speculation, Netflix have come out to say that they will be keeping Friends.  It seems that after spending $100 million in December to keep the show, the bosses at Netflix aren't that keen on losing the show.

So it seems like this internet thing is here to stay, huh?

Over twenty years after Netflix began, and over a decade after Amazon Video and Hulu got started, Warner Bros. has decided it wants to get involved with online streaming. As a result, they are going to have to start taking back some of the shows that we have all been enjoying on Netflix.

They don't know that we know they know we know.

Warner Bros. might think that people won't really notice if they take back just one of over 1500 TV shows being shown on Netflix, but the draw of Friends shouldn't be underestimated. While Netflix won't publish actual viewing figures for any of their shows, various independent analyses suggest that Friends is the top, or second to top (following The Office) show to be streamed. One report suggests that 4% of all viewing on Netflix is people watching Friends. No wonder they don't want to give it back.

She would appreciate it if you didn't use the words 'old,' or 'downhill,' or 'they still look pretty damn good.'

It's crazy to think that people are still watching the show. It first aired nearly a quarter of a century ago. This was the same year that Nelson Mandela became South Africa's first president, Nirvana released their MTV Unplugged album and the first PlayStation was launched.

As the show started so long ago, it is not surprising that there are some questionable aspects that wouldn't hold up in a new show today. For starters, why are all the main characters white? The number of people of colour throughout the ten series could be counted on one hand. Not okay.

Sometimes I wish I were a lesbian.

And then there's the latent homophobia throughout. From the fact that it's meant to be funny that Ross' wife is a lesbian, through to the number of gendered jokes about the guys not wanting to seem like women, the show isn't as PC as we’d like these days. Although the women do usually manage to stand-up for themselves against any misogyny, with some well-placed lines such as this: Ooh I'm a man, ooh I have a penis, ooh I have to win money to exert power over women.

How young is young Ethan?

Yet despite all these issues, a whole new generation of woke AF Gen Z kids are watching Friends now, and they're loving it. The addition of Friends to Netflix opened it up to a whole new audience. It could be that letting Netflix have the show was just a clever marketing scheme by Warner Bros. Netflix paid $100 million to renew their contract. And they are just going to get more people hooked. Netflix may not be giving it back just yet, but when they do, Warner Bros. will be able to reel in a whole new audience.

This is how I would hold a football.

Friends is now a pretty old show. It began in a time before mobile phones and social media. But sometimes it can feel like it still wasn't that long ago. But do you remember little Ben, who was born at the end of season 1? Let's see where he went after Friends.

Was that place the sun?

Cole Sprouse, who played Ben Geller, has aged like you wouldn't believe. After Friends, he had his own TV show with his identical twin brother, Dylan Sprouse, called The Suite Life of Zach and Cody. He is now 26 years old, has graduated from college and is star on another Netflix show, Riverdale. If the Warner Bros. streaming service goes ahead, it is another one of the shows that Netflix could lose. But he's not the only character to have grown up. Let’s take a look at some of the others.

Ross was the lovable loser who was always given a hard time by his friends. In real life he would probably be one of the more interesting ones to hang out with. He has a Ph.D., is well-read and is very kind-hearted, although we love him for his goofy comebacks and slapstick gold.

Since his time on Friends, David Schwimmer has done some directing and producing, as well as a few films. His most notable role has been as the voice of Melman in the Madagascar franchise.

Handle is my middle name. Well actually it's the middle part of my first name.

Chandler is the awkward friend who uses humour when he's uncomfortable, as well as every other situation. He works in a job just to pay the bills and he struggles with life's every day challenges. His one-liners still keep us laughing on the tenth time.

Matthew Perry has been known for suffering with drug addiction and alcoholism. He has spoken out publicly about how it is a disease for life and one that you can manage but never cure. He's played a number of parts since Friends, including Zac Efron's dad in 17 Again, and starring in the TV shows Go On and The Odd Couple.

Including a brief stint of not letting go, by starring in the spin-off Joey, Matt Le Blanc has stayed on the small screen. As well as starring in Episodes and Man With A Plan, Matt Le Blanc took on the role of being the new host on Top Gear.

Phoebe is the quirky, erratic friend who adds a little spice to the group of otherwise plain-sailing friends. In many ways, she sums up being in your twenties perfectly. She tries new jobs that let her be who she is, and she has morals that she sticks to, at the same time as dating lots of cute guys, and playing guitar badly. She knows who she is and doesn’t change for anyone. We should all aspire to be a bit more like her.

I wish I could but I don't want to.

Despite playing such a kooky character, Lisa Kudrow's co-stars have said that she was actually the smartest one of all of them. Since leaving Friends, she has starred in a number of TV shows, including the leading role of Fiona Wallace in Web Therapy.

Monica struggles through her twenties as she searches for love and romance, and has to take on a bunch of crappy jobs as she tries to make it as a chef. She ends up getting everything she wants, even if she does leave behind the most incredibly apartment the world has ever seen.

Courteney Cox has starred in a lot of different TV shows since her days of obsessively cleaning on Friends, but her most notable role is her starring role as Jules Cobb on Cougar Town. By the fifth season she was earning $200,000 per episode, not that she needs the money. Due to their syndication deal, the cast of Friends each still get 2% of profits each year, which is roughly $20 million a year. Not bad for a show that they finished working on over fifteen years ago.

It was Rachel's arrival to Central Perk in a wedding dress that started the whole show and completed the group. From there she undergoes a whole transformation as she has to grow up and start fending for herself. The struggles she goes through definitely resonate with people of the same age.

She's not Rachem. What the hell's a Rachem?

The others may be some of the most successful actors on the planet, but they are nothing compared with the mega-star Jennifer Aniston. From Marley & Me, to Horrible Bosses, to Dumplin', she has been in a number of hits. Plus, she just celebrated her 50th birthday and still looks better than everyone else.

Friends is more than just a sitcom with canned laughter, it is a show that led the way for all sitcoms since. It was one of the first to concentrate on people of this age group, plus it demonstrated that it can be about humour rather than drama. By working together throughout, the cast and creators managed to create something truly magical.

Welcome to the real world. It sucks, you're gonna love it.

The whole premise of the show is based on this line. It is about the trials and tribulations of simply being young. As you make it out of college and embark in the real world, you discover that you don't know everything, and you've got a long way to go, while your friends become your new family.

It's a moo point.

One of the greatest parts of the show is how relatable it is. It doesn't matter that people might say that it's dated, or if people talk about how much money the show made. The point is that even today, everyone finds themselves quoting endlessly. That's because it still perfectly sums up so many situations people find themselves in today.

The story of Ross and Rachel is a fairy tale for the ages. While both 'friend zone' and 'we were on a break' are phrases that first gained popularity from this show, it was the idea of a lobster that really captured people's hearts. Although the show is mostly humorous, they also express real emotions and relationships so fantastically that everyone becomes fully involved. (Ross was cheating; they had not broken up. Fact.)

It's not that common, it doesn't happen to every guy, and it is a big deal.

One of the cleverest aspects of Friends is that it is able to be broadcasted at any time of the day, but still contains adult humour. In order to get around the broadcasting rules, the writers had to be clever and make comments that are less explicit. It is this sort of touch that makes the show so successful.

I'm not so good with the advice. Can I interest you in a sarcastic comment?

Which character are you? This is the eternal question that any and every fan has asked themselves and their group of friends at some point. Each character is multi-faceted and has different aspects that we can each relate to. It is their realness that gives the show its depth.

My motto is get out before they go down.

Friends has always been ahead of its time, while also being very much of its time. Should Warner Bros. accept that Netflix is the future of online streaming, and let Friends stay there? Or would a move away from Netflix signal the beginning of the end for Netflix's dominance?

They'll be there for you.

Even if Friends ever leaves Netflix, there will always be a way to watch it. And it probably won't have to involve paying for this new Warner Bros. streaming service either. Nevertheless, we're relieved to hear that it will be staying on Netflix for the foreseeable future. But either way, it sounds like the perfect excuse to binge watch the show all over again, just in case.