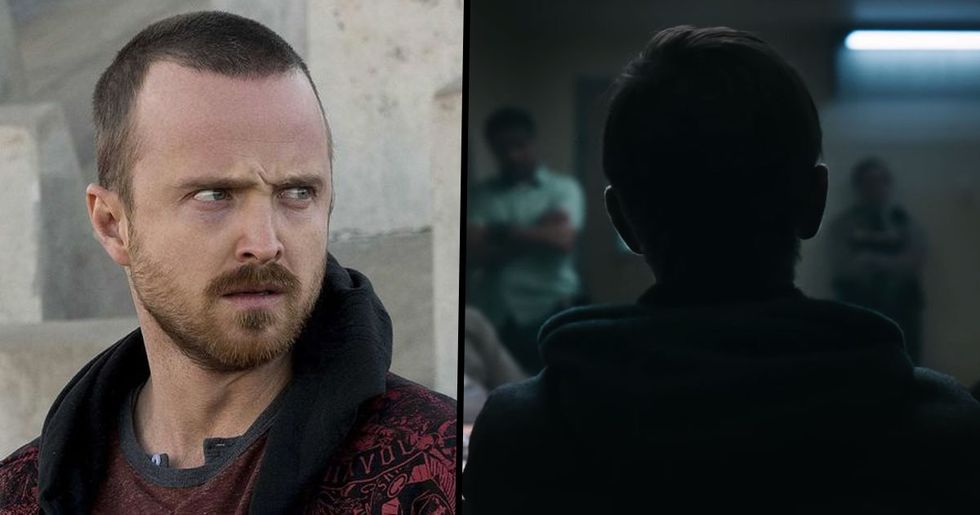 Over the five years Breaking Bad aired on television, we grew to love (and then hate) Walter White, the chemistry teacher who joined up with his former student to cook meth and pay for his cancer treatments. Then came that final season, when all the tension that had been building up throughout the show was released in horrific fashion, when Walt had to watch his brother-in-law be murdered, his fortune stolen, and his family unit utterly and completely destroyed. (Remember when Skylar slashed at Walt with a knife and he screamed "WE'RE A FAMILY" and then kidnapped their baby? Rough times.)

And now that it's been six years since Breaking Bad bid audiences adieu, and there's a new Breaking Bad story to be told. Keep scrolling to see the first trailer, find out the release date and see just how much the original cast has changed.

There's nowhere else to start but with the man at the top of the meth empire — Walter White.

The star of the show, Walter White used his brilliant scientifically-inclined brain to cook the purest meth the Albuquerque area had ever seen in order to "provide for his family." (But actually it was all to prove he was a big, tough man.)

Played by Bryan Cranston, Walter went through the biggest changes we've ever seen from a TV character.

Breaking Bad creator Vince Gilligan always talked about how the idea behind the show was to turn Mr. Chips into Scarface, i.e. make the meekest little boy an all-encompassing stone cold villain. And man oh man did he ever pull it off in Walter White.

In the first season, Walt was a lowly cancer-stricken chemistry teacher with no idea how to pay his medical bills.

Does this look like the face of a crap-your-pants scary drug dealer? Nah man, this Walter White looks like the kind of dad eight-year-olds ignore at a slumber party.

By the end of the show, he was ruthless.

Walter did some, er, bad stuff throughout the show. Here we see him committing one of his more noble acts: saving the life of his friend Jesse Pinkman... by running down two human beings with his car.

By the end of the show, Walt would admit who he really was.

The genius of Breaking bad was that we could always kind of sympathize with Walt. Cancer is a bad hand to be dealt, and not having the resources to pay for treatment is just brutal. But by the end of the show, it was all finally stripped away, and we saw Walt for what he was — an egomaniac who craved affirmation and status. It made a lot of us Breaking Bad fans go, "wait, we were rooting for this guy?" and then take a 45 minute shower.

Today, Bryan Cranston seems to be... in a happier place.

Wow, look at how happy he is! Bryan Cranston has left so much of the darkness of Breaking Bad behind him, posting pictures on Instagram of his various theater awards. This guy looks fulfilled and well-adjusted — he'd never leave a young woman to choke on her own vomit and die!

Although he still has time for some Walter White-style creepin'.

I have to imagine this photo was re-grammed by Cranston and was originally taken by another pusher who had wandered into his territory. I don't know if you know this about drug dealers, but they are very protective of their territory.

Jesse was the crowbar that pried open the door for Walt into the world of drug-dealing. It was Jesse who got to say the titular line in the Breaking Bad pilot. As Henry Winkler's acting coach character Gene Cousineau said in Barry, when you have the titular line, they can't cut you out.

Played by Aaron Paul, Jesse was a former burnout student of Walt's.

And it was this relationship that always meant the most to me on Breaking Bad — to see a young man find a father figure years after he'd let him down? It was moving. I even kind of got it — and this is gonna be a controversial opinion — why Walt would let Jesse's girlfriend Jane choke on her vomit and die. It was all to make Jesse realize he had to get clean! He did it for Jesse. It was actually a very sweet thing for Walt to do! (This is such a bad take I'm so sorry.)

Nowadays, Aaron Paul is in big budget movies like Need for Speed.

And this is a very fun development because the last scene of Breaking Bad saw Jesse escaping the nazi compound in a car. There's no reason you can't go see the Need for Speed movie and assume it's picking up with Jesse right where the show left off.

And his collaborations with ol' Walter White aren't over.

The former Walter White and Jesse Pinkman actors had a very cute idea to start a mezcal company, and listen, it's all very nice. But they were teasing this collaboration on Instagram for days, all while we know Aaron Paul is filming some sort of Breaking Bad movie. We all thought their hints would lead towards confirmation that Bryan Cranston would appear in the film somehow. I was so disappointed I vowed to never buy their mezcal in my life (also I almost for sure can't afford it).

What started out as a loving relationship between a stressed-out working wife and her wimpy, go-along-get-along husband turned into a prisoner-captive relationship. When she learned about Walt's crimes, Skylar wanted out.

And even though Walt's cooking completely destroyed her life...

By the end of the show, Skylar had lost everything. Her husband had abandoned her and she was drowning in legal bills. Walt gave her enough evidence to potentially let her off the hook with the law, but the life she knew with her family was demolished the moment Walt started cooking.

... she became a bit of a badass in her own right.

Here's the thing — Skylar did have her powerful moments. At different times, she both worked with and stood up to Walt, wrestling a little bit of agency away from her monster of a husband.

Skylar was played by Anna Gunn, who is still acting today.

Anna Gunn put forth such a performance as Skylar White that she'll probably be working forever. She appeared in Gracepoint, the American remake of British murder-mystery Broadchurch, before playing Martha Bullock one more time in the Deadwood movie.

Then we come to good ol' DEA agent Hank Schrader.

Hank Schrader had such a fascinating role in Breaking Bad — he was both an entrenched and beloved member of Walt's family and the arch-nemesis of Walt's alter-ego Heisenberg.

... what he was really hunting were minerals. This guy was fascinated by minerals, so much so that the worst thing you could possibly do to him was refer to them as "rocks."

Dean Norris portrayed Hank, and we are not sure he was ever acting.

Look at him today! The guy not only looks exactly the same — maybe a few more white hairs around the ears — but he's drinking a Schraderbrau, the beer his character brewed on the show that he is now actually brewing in real life. I think this guy might not have known he was acting on Breaking Bad. He might have just been being himself.

Hank was married to Marie.

Marie was never afraid to call it like she saw it, although she did have a bit of that "I need to speak to your manager"-sort of energy. It was grating... until she turned that energy on her drug-dealer brother-in-law.

And she could not tell the difference between rocks and minerals.

Marie's utter disregard for Hank's mineral collection was one of the funniest bits in the show, but it did make us ask... what is the difference between rocks and minerals? I've been afraid to google it, for fear that I've been calling rocks by the wrong name my entire life.

Marie was played by Betsy Brandt, who is now doing a play in Pasadena, California.

It makes so much sense to me that, after years on a television set, and actress would crave the visceral feeling of performing before a live audience. Although, it does open the door for someone in the crowd to yell out a "Jesus Christ Marie!"

And it looks like she gets to break a little bad herself?

Huh, seems like Betsy Brandt is going to do something immoral for the sake of her family too. Maybe all her snipes at Walt were just jealousy? Maybe she wanted to be the one cooking meth behind her spouse's back?

Ah, Walt Jr. — the symbol of innocence we needed to justify every bad ting Walter White ever did. I mean, we wouldn't want anything bad to happen to Walt's sweet, cerebral palsy-stricken son, would we? This is how Breaking Bad tricked us into cheering when Walt shot drug-dealers in the brain.

Walter Jr. was always a bit of a smart-ass.

This kid was full of snark. He would've been great on Twitter, but by the time it got big, he was under heavy surveillance by the DEA because his dad was the most notorious drug-lord in the country.

And the internet loved him for being obsessed with breakfast.

Today, Walt Jr.'s had himself a real glow-up.

Played by R.J. Mitte, today the guy's got the kind of chin that turns heads on the sidewalk. Did he have that chin during Breaking Bad? I can't picture it. That feels brand new.

And he's also talking about disability in Hollywood.

As someone with cerebral palsy himself, R.J. Mitte spends a lot of his time speaking about the lack of diversity in Hollywood, specifically in terms of roles for disabled actors.

The drug lord before Walter stepped into the picture. Having first hired Walter to cook, Gus would eventually fight Walter to the death, cementing his status as Breaking Bad's most powerful villain...

And ooh, that fight to the death did not go well for ol' Gus! Walt used his one weakness — a sincere hatred for elderly drug-dealer Tio Salamanca — to catch Gus unaware and blow him right to hell.

The man who played the one-time kingpin, Giancarlo Esposito, seems like just the bubbliest, happiest dude. Look at him, with his cute lil' curls all flowing! I can't even remember why I was so excited to see half his face blown off.

And now we're caught up with the cast, here's the trailer.

Netflix has also confirmed it will be released on October 11th. Not too long to go!