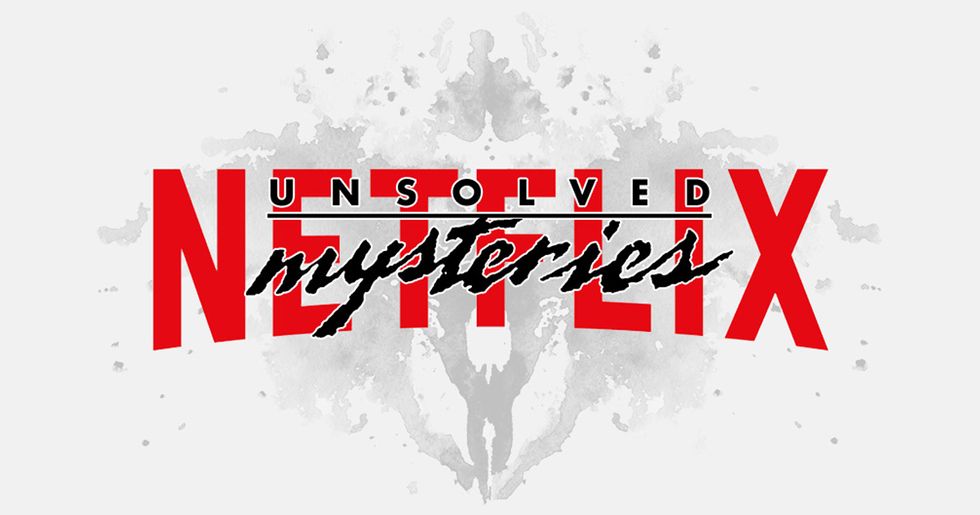 Netflix Is Bringing Back 'Unsolved Mysteries' and We Are so Excited

There's a special pull to the true crime genre. Who knows why, but we'll gobble up those stories of murder and horror, whether on TV or in podcast form. In fact, we're SO in love with true crime, that it's become the most popular podcast genre around. What's up with you freaks out there, falling asleep to tales of dismemberment?

If you've listened to all of My Favorite Murder, and you can't find a new show that will scratch your true crime itch, we've got great news for you: Unsolved Mysteries is getting a reboot. And we have reason to believe that it's going to be pretty dang quality.

Keep reading to get the inside scoop on your very favorite true crime show and what the newest iteration will look like. We're already priming Netflix to get watching.

“Unsolved Mysteries” is coming back to haunt a new generation! The original creators have teamed up with the produc… https://t.co/aNQeb5xWWn
— Netflix Queue (@Netflix Queue)1547837700.0

Let's start with the very basics. Netflix is picking up Unsolved Mysteries. No release date as of yet, but confirmation of 12 episodes in the first run. YES.

If your memory has gotten a little bit faded let's refresh: this powerhouse of true crime ran from 1987 to 2010 (holy moly that's a run), and featured hosts including Robert Stack, Raymond Burr, Karl Malden, and Dennis Farina.

But the news that has us most excited is that the show is coming back with its original creators. Cue us throwing a flipping party.

Oh yeah, Netflix wasn't about to give us substandard product. They brought in some new blood to make sure the show was tip top. You'll never believe who it is.

Here is the full scoop:

"Each of the 12 episodes on order will dig into a single mystery, and with a “global" scope, they should have enough unsolved cases to make new installments until the world ends or Netflix runs out of money — whichever comes first." Our money is on the world ending.

We all want more deets.

Who will host? When will it drop? TELL US NETFLIX.

The Internet has theories.

Even if Netflix won't tell us Twitter immediately jumped on this train to share their excitement, their suggestions, and their pleas.

Of course, the overwhelming emotion on The Internets was sheer joy because this show is a classic.

Some people even made it obvious that they're psyched about the inclusion of Stranger Things personnel with GIFs and reactions straight from the show.

It's scary but we love it.

Everyone remembered that they were absolutely terrified as a kid when they watched this show.

Of course, nothing will keep us from actually watching the show, not even the fact that we had to keep the lights on and our teddy bears close.

Even as we were reliving the creepiness, tons of Twitter users were quick to point out the things they cared most about: music and host.

@seewhatsnext just promise me they'll use the original version of the theme.
— richard house (@richard house)1547838174.0

Of UTMOST importance is that Netflix does not mess with the original theme song, which was totally perfect. Don't believe me? Listen for yourself.

If you grew up with the theme it still causes you night terrors. Which is why we want it back?

But that's not where the internet came out in force. No, the real question that haunts the Twitter thread is who will be the new host?

Twitter thinks there's only one man for the role.

There are dozens of comments clamoring for Rob Gavagan – wait, who?

@seewhatsnext @netflix @netflix I would highly recommend you cast @TheRobDyke as the host for this series. He’s cre… https://t.co/rzKdxpLpcC
— Matthew Santoro (@Matthew Santoro)1548013435.0

Apparently, Rob Gavagan is creating some of the most popular creepy content on Youtube today. And there are SO MANY fans telling Netflix he's the guy to host Unsolved Mysteries.

Maybe it's time to check this guy out.

Look at all this amazing, creepy content. We're on board if Netflix decides to give him a try, but in the meantime, his channel can tide you over until the streaming channel drops a release date.

There were certainly other suggestions out there, but everyone does agree on one thing: the host is a hugely important part of the show, and a vitally important choice.

There were some other strong opinions too.

What about those mysteries that have since been solved? Please tell us Netflix!

And some folks were less than enthused.

Dang Hot Tub Crime Machine, tell us how you really feel (that's a sentence that I've always wanted to write).

But nothing can dampen our enthusiasm.

Seriously, this brings back so many childhood memories.

Our nerves are already tingling.

That disclaimed. The creepy music. The spooky voice. It's all that we want.

Sure there might be OVER 500 episodes of the original, but that will never stop us from wanting more, more, more.

Even if we don't have a release date, we're excited.

Pop some popcorn and start watching the backlog. Who knows how long we'll be waiting before season one drops?

Maybe we're not the best at being patient.

Can't good television appear out of nowhere immediately as soon as I want it?

But good things do come to those who wait.

So if we have to wait for something, at least it's something awesome waiting for us at the end.

Get ready for some spooky stuff!

And hold onto your Unsolved Mysteries excitement. This one's going to be SO WORTH IT.