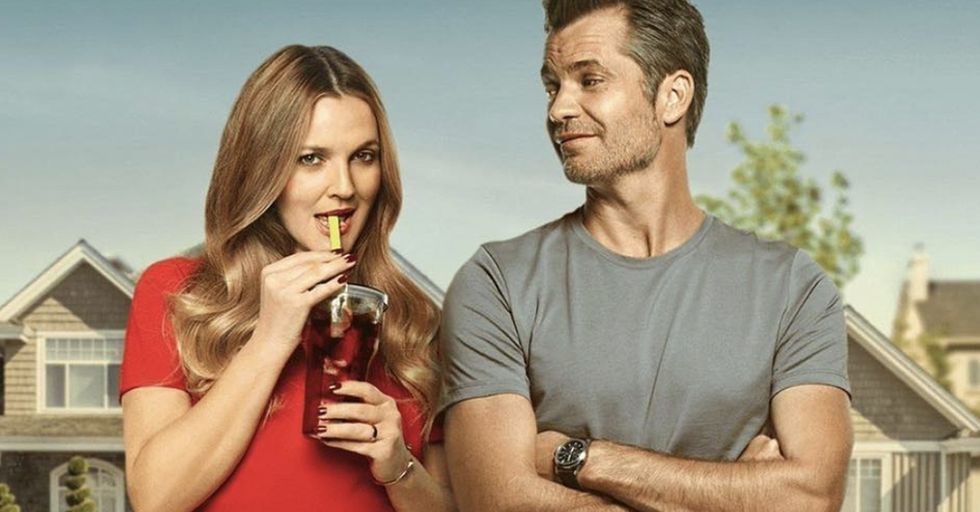 It's a sad day for Santa Clarita Diet fans. Netflix just announced that it canceled the original series, and the internet is NOT happy. Santa Clarita Diet has only been around for three seasons. But that's been more than enough to amass a devoted cult following. And if that's not enough, season three also ends on a cliffhanger! Fans might never get their closure now. Not cool, Netflix.

So, why did Netflix cancel an original show that was, by all accounts, doing really well? And what exactly are fans saying now? Keep reading for the full scoop on Santa Clarita Diet and the loud internet response to this news.

Netflix has just pulled another plug.

This comes after three seasons.

Drew Barrymore stars as a mom who has joined the ranks of the undead (she's a zombie). Her husband, always trying to cover up her behavior from the rest of the world, is played by Timothy Olyphant.

Netflix issued a statement after the cancelation.

“The world had never known a ‘zom-com’ until Santa Clarita Diet, and we’re indebted to creator Victor Fresco for bringing this idea to Netflix," the company's statement reads.

Gotta give props to Barrymore and Olyphant.

"To their endless credit, the incredible Drew Barrymore and Timothy Olyphant were totally game, with an uncanny knack for comedy that brought Sheila and Joel Hammond to vibrant life, even though one of them was undead," Netflix continued.

So, will Netflix ever make more?

"We’re grateful to Victor, Drew, and Timothy, along with fellow executive producers Tracy Katsky, Aaron Kaplan, Chris Miller and Ember Truesdell and the terrific cast, including Liv Hewson and Skyler Gisondo, and crew for three hilarious seasons for Netflix members to discover for years to come," the company concluded. So, more episodes don't seem likely.

Victor Fresco and Tracy Katsky delivered their own heartfelt statement.

"Like our audience, we were all-in on Sheila and Joel," they shared. "Their relationship, in the face of incredible adversity, was inspiring to write and to watch. Mostly, they were funny, which in a comedy is important. Working with Drew and Tim, along with the immensely talented Liv and Skyler, was a joy and a once in a lifetime experience."

They took a small humorous dig at Netflix.

"Netflix took a chance on this odd show and for that, we will always be grateful," the producers continued. "They were supportive, ever positive, and appreciative of our work. Until about noon today. Still, they were just one phone call away from being a perfect studio. Not bad."

And they said a bittersweet farewell.

"Everything ends. This was a thing. And so it ended. We’ll miss it but are proud of the work we did and will always appreciate the love and enthusiasm we felt from our audience. It if was up to them, Sheila and Joel would continue for another 10,000 years."

Timothy Olyphant pretty much stayed in character with his statement.

"I loved working on this show," he said. "I’m going to continue coming in and doing scenes. If they don’t want to film it, that’s up to them."

Pretty sure fans would be cool with that.

If Netflix didn't come and film it, then a bunch of other people definitely would!

“Of all of the characters I’ve ever been, Sheila Hammond is one of my favorites," she said. "She and Joel were an amazing couple, who had shared goals. And I am lucky to have worked alongside Tim Olyphant."

"It was an honor to get to do something so delightful," Barrymore added. "Sheila lives forever in me. And I am grateful to Victor Fresco, who created a world so unique."

Some of Netflix's cancelations have been about expenses.

But Santa Clarita Diet had a devoted fanbase and excellent reviews--season 3 of the show was critically acclaimed and has 100% on Rotten Tomatoes!

But Netflix has been aggressively canceling shows lately.

Not long before this, another wave of outrage hit the internet when Netflix canceled its heartfelt comedy One Day At A Time.

So, queue another wave of anger.

Fans of Santa Clarita Diet grabbed their torches and pitchforks (or more accurately, their keyboards) and began multiple trends across social media.

By all accounts, it got better with age.

It's like...fine wine. And you don't just toss fine wine in the garbage!

I love how "Thanos-snapped" is just becoming a term that people use when they're ticked off!  Like with this SCD fan, for instance.

What is with Netflix creating original shows and then cancelling them after a couple seasons? Why should I stay sub… https://t.co/Lt4QKfKeDj
— Meera Sathyadas (@Meera Sathyadas)1556436123.0

If you haven't noticed, Netflix has a tendency of specifically canceling shows (even if they've got good ratings and a fanbase) after three seasons.

Although it seems less likely to work as opposed to when a TV network cancels a show, who knows? Anything can happen.

For some, the logic just wasn't there.

Why would you cancel #SantaClaritaDiet? It has •Incredible main characters •An original concept •Jokes that are ac… https://t.co/bCqpYcUrke
— Sammy Jo (@Sammy Jo)1556369387.0

That is an awfully compelling list of 'pros' there...

And some didn't get why SCD had to go, but others got to stay.

It's no consolation, but life just isn't fair sometimes.

Do you know how much Netflix pays to have 'Friends'?

Me waking up to find out Netflix have cancelled #SantaClaritaDiet but continue to pay millions to keep Friends https://t.co/MMj1yT9rZl
— 𝘼𝙨𝙝𝙡𝙚𝙮 (@𝘼𝙨𝙝𝙡𝙚𝙮)1556348151.0

Previously, it was about $30 million per year. Throughout 2019, however, Netflix will be paying a whopping $100 million to keep Friends on its platform!

Another of Netflix's most-streamed shows is 'The Office.'

I think what really upsets me about @netflix cancelling #SantaClaritaDiet is that it makes NO SENSE. They’re willin… https://t.co/SqXCv7wbKd
— QUINN HOPP Ⓥ (@QUINN HOPP Ⓥ)1556338178.0

So as you can imagine, Netflix pays quite a bit of money to keep The Office too.

Which is part of why fans are so angry.

Netflix has talked about wanting to eventually be a platform that mainly hosts its own original shows. But this doesn't seem like a great step in that direction.

Fans poked fun at another pattern at Netflix...

@netflix is cancelling all of these good shows but keep making teen romance movies that are all the same with Noah… https://t.co/Gt8i94L7JP
— Chip Chrome (@Chip Chrome)1556333972.0

Yeah, pretty sure there's at least, like, four different Netflix original romcoms with Noah Centineo in them.

And that, combined with the mass of cancelations, is leaving a lot of fans with a bad taste in their mouths.

Santa Clarita Diet was the only show of its kind out there.

And that's another reason to mourn; it's one thing if you lose a show with five other series in that same category. There's no other quirky zombie comedy quite like this one to turn to now!

The cast, crew, and creators gave us something special.

So let's be thankful we got to see the stories they wanted to tell...and then maybe rage just a little more at the cruel capricious gods (read: Netflix executives) who took it away. Let's get through our feels together. Share this story with other mourning fans of Santa Clarita Diet!