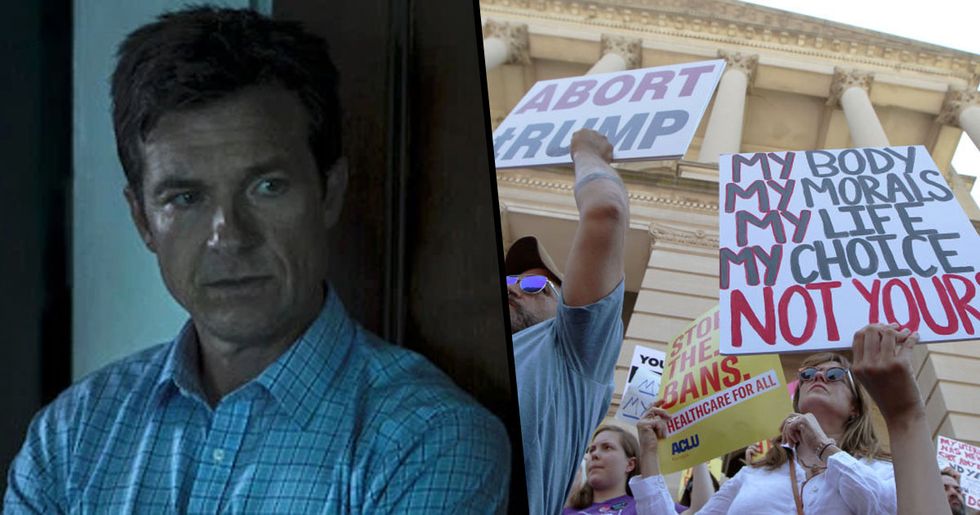 If you haven't already heard by now, earlier this week Georgia passed a bill that makes it illegal for a woman to have an abortion once a fetal heartbeat has been detected.

A large sector of the internet is disgusted with the passing of the anti-abortion bill. Denying women the incredibly important choice whether or not to have a baby means that the southeastern US state has taken one-thousand steps back in terms of progression. The government is being sued left right and center, protests are taking place across the country and people all over the world are speaking out after the horror of the news.

Now, Netflix has spoken out against the bill and their decision could affect us all in a very different way.

On May 7th, Brian Kemp, the Governor of Georgia signed the anti-abortion "heartbeat bill".

According to Huffpost, Kemp’s signature overrides the old state law that allows abortion up until twenty weeks and, as a consequence of the bill, Georgia is now one of the most restrictive states in America when it comes to abortion.

The law makes it illegal to have an abortion when doctors can detect a fetal heartbeat.

Kemp believes that the bill is doing important work.

"Wait, what? Easy? It's never an easy decision," Twitter-user, Shannon Reno ‏says. "No woman wakes up and thinks, 'Today is a great day for an abortion!' However, she CAN (and should always be able to...)"

Celebrities like Reese Witherspoon are speaking out against the bill as well.

Many women thanked her for using her platform to speak out in the comments. Celebs like Reese also work, shooting films in Georgia...

And women aren't the only ones who spoke out against the bill.

Former One Direction-er and current British pop sensation Liam Payne explained his stance, stating "I have so much respect for women. Watching someone go through pregnancy and how tough it can be at times, and us as men never have to go through that, so how can we even comment or decide what women should or shouldn’t go through?"

Payne speaks from experience, having watched his girlfriend Cheryl Cole go through pregnancy and childbirth.

We love seeing men add their voices to this cause!

Even our favorite Friend, Courteney Cox, spoke up...

Cox is an Alabama native. She voiced her horror at what's currently going on in her home state.

Some other big names are now weighing in on the issue.

The Good Place actress, model, presenter and activist, Jameela Jamil has spoken about her personal experience and why she thinks that the bills being passed are wrong.

Jamil said that the new laws are "blatantly demonstrative of a hatred of women".

Now, the HuffPost is reporting that the Center for Reproductive Rights has pledged to sue the state of Alabama.

But in March, Kemp claimed that "there will no doubt be a legal battle" if the bill passed.

And the problem isn't just in Georgia.

"Bills marking a fetal heartbeat as a deadline for abortion have also been introduced this year in Tennessee and Mississippi," HuffPost notes.

Let's look at some of the viewpoints that are being put out there.

Some people are very much in favor of the bill.

Some seem to believe that the heartbeat bill is the "lesser of two evils."

Is denying women the choice to go forth with, or to terminate, their pregnancy "better" than late-term abortion?

Is there a better solution?

Maybe abortion isn't ideal, but right now, it's the only choice that women have if they don't want to move forward in their pregnancy - or the choice that they haven't got in this case.

Really, it isn't about whether you're pro-life or not.

The bills that are being passed are an attempt to prevent anyone from being anything but pro-life. It's about choice and about women having control of their own bodies, not about whether or not abortion is good or bad.

That's what's got so many people riled up.

Imagine you miscarry but people don’t believe you or you have enemies who contact authorities to say you terminated… https://t.co/c2dPdUh65v
— Pieke Roelofs (@Pieke Roelofs)1557591551.0

The control that these bills have over women is, quite frankly, terrifying.

Women are being affected by this and they had virtually no say whether or not the bill was passed.

The Washington Post has revealed that "for every woman voting for new abortion bans in Missouri, Georgia and Alabama, seven men did".

What if a woman is forced to give birth and can't sustain a good life for that child?

What if the child is forced to live with a low quality of life or has to live unwanted and unloved?

Rape is an issue that many are bringing up.

As a victim of #sexualabuse, the fact that #Georgia would allow rape victims to carry a pregnancy is disgusting. Al… https://t.co/UccJEvN4PI
— Tess (@Tess)1557464067.0

The BBC notes that under the bill that was passed in Alabama, "doctors face 10 years in prison for attempting to terminate a pregnancy and 99 years for carrying out the procedure".

Some are saying that the new bills protect rapists over women.

Just this week, one man was given just twelve years in prison for continually raping and abusing his daughter. Compare this to the ninety-nine years that a doctor may receive for consensually terminating a pregnancy, and it's not hard to see that there's a pretty big problem here.

Some people have pointed out this similarity.

For fuck's sake, The Handmaid's Tale was supposed to be a warning, not an instruction manual.
— Denizcan James (@Denizcan James)1558039615.0

The Handmaid's Tale is a dystopian novel - and TV series - about a society in which women are forced into sexual servitude. They are the property of the state and the government decides what happens when it comes to reproduction. Sound familiar?

On her talk show, actress, Busy Phillips, shared her experience as a teenager.

Her story is heart-wrenching, but sadly it's similar to so many other's.

Jason Bateman has also spoken out.

The star, best known for his roles in Arrested Development and Ozark, is standing up for women's rights.

Ozark and the HBO show, The Outsiders, which Bateman executive produces, are currently being filmed in Georgia.

“If the ‘heartbeat bill’ makes it through the court system, I will not work in Georgia, or any other state, that is so disgracefully at odds with women’s rights," Bateman told The Hollywood Reporter.

If this trend continues, Georgia will be hit pretty hard.

Huffpost notes that "A strong response from the entertainment industry could potentially hurt the economy of the state, which serves as a popular filming location for Hollywood due to its generous 30% tax credit program for film and television projects."

Shows and movies such as Netflix’s Stranger Things, AMC’s The Walking Dead and Marvel’s Avengers series have been filmed there.

And it looks like it will have a pretty big impact.

Amongst all the celebrity attention, Netflix is the first major US studio to speak out against the anti-abortion laws.

In a statement to Variety, Netflix said that it would consider pulling its productions from the state if the 'heartbeat bill' that was signed into law in May goes into effect. "We have many women working on productions in Georgia, whose rights, along with millions of others, will be severely restricted by this law," said Ted Sarandos, Netflix's chief content officer.

Variety approached several other US studios, the publication said, and all of them refused to comment on the anti-abortion laws. Many of the studios that the publication approached film in Georgia, including industry-giant, Disney, who shot the recent Avengers:Endgame in the state.

Last year, over 400 movie and TV projects were made in Georgia.

According to state officials, 455 projects were filmed in the state in 2018 alone, adding an estimated $9.5 billion to the industry.

So, with Georgia being an industry-favorite for movie and TV projects, will we see any studios boycotting the state in light of the recent anti-abortion bill?

Well, as far as Netflix is concerned, the answer is unclear. Ted Sarandos said in his statement to Variety: "Given the legislation has not yet been implemented, we'll continue to film there, while also supporting partners and artists who choose not to. "Should it ever come into effect, we'd rethink our entire investment in Georgia."