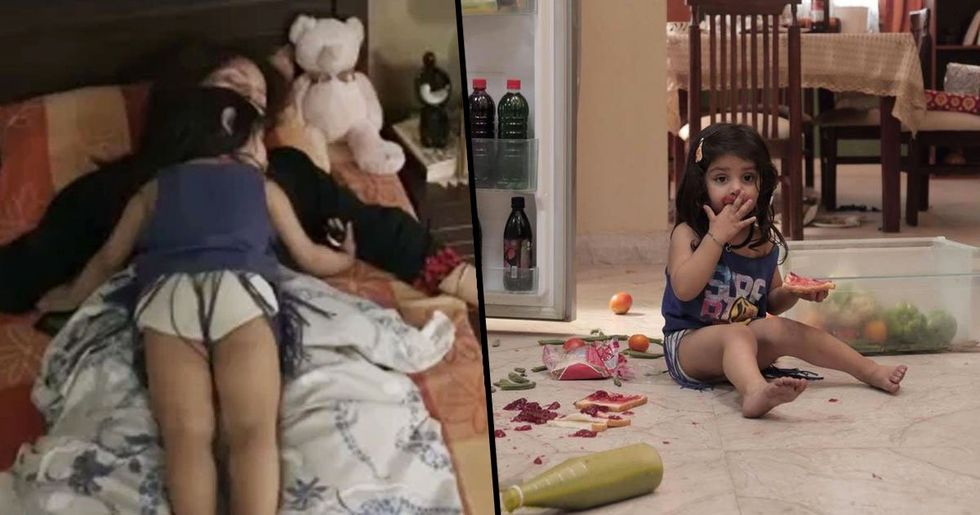 You can always count on Netflix to top its own releases time and time again. And when it comes to horror and thriller genres, the streaming giant always seems to be on its a-game - remember Bird Box or The Haunting of Hill House? The platform really knows how to push the boat out when it comes to this particular area of the box office.

But before you roll your eyes at the thought of another generic horror movie, let me tell you that this movie is completely different from what you'd expect. It's not your usual gory axe murderer on the loose, creepy possessed doll, or poltergeist wreaking havoc in the home of an innocent family... this movie is much worse in a chillingly different way.

And those brave enough to watch the trailer have been left feeling pretty disturbed, with people saying that the movie is "every parent's worse nightmare."

Keep scrolling to find out why Pihu is so uniquely horrifying. And, don't worry, we've got the trailer coming up if you think you're brave enough to watch.

There's something within us that just can't resist a creepy movie.

Lights out, popcorn on the sofa (that ends up getting spilled everywhere when that jump scare happens), and cushion covering our eyes... we've all been there.

Even if it does make it harder to sleep at night.

No matter how many times a movie plays over in our minds, we always seem to go back for the adrenaline fix.

Netflix has a particularly good choice of horror/thriller viewing.

From the terrifying Veronica, dubbed one of the scariest films of 2017, to last year's spine-tingling thriller, Bird Box, the streaming giant seems to well and truly know how to scare its viewers.

And the latest addition that everyone's talking about?

A "distressing" new movie called Pihu - which has already been labeled as "Bollywood's most disturbing film."

People are calling the film "every parent's worse nightmare," as the movie follows an adorable 2-year-old girl as she fends for herself among the dangers of her family home, as her mother's dead body lies in the bedroom.

It makes for nail-biting viewing as the house becomes a death trap for the tiny toddler.

Every parent knows that our homes are full of safety hazards for small children - from the stove to the stairs - tots should never be left unsupervised. But, after Pihu's father leaves on a business trip, the little girl is left totally alone when her mother fails to wake up.

Watching as the toddler stumbles from one disaster to another has made for distressing and chilling viewing.

At one point, we see Pihu trapping herself inside a refrigerator before finally being able to fight her way out, while in another harrowing scene, we see her climbing over the railings of an extremely high balcony. There's also smashed glass on the floor and flames flickering on the stove, with the house still filled with balloons from the tot's second birthday party.

But her attempts come to no avail... unbeknown to everyone else, the toddler is completely by herself - with only her mother's lifeless body to keep her company.

If the movie wasn't horrifying enough, it's based on a true story.

The movie, which was 3 years in the making,  is based on a true-life incident from New Delhi in 2014 - wherein a child was left at home with dead parents.

The film's director wanted to tell the story from the child's perspective.

"I could have told the story from a parent's perspective, but I chose to tell it from Pihu's point of view," director, Vinod Kapri, explained. "It was not easy because I cannot make a child act. I had cameras all over the place and let her act in daily life. I spent two months with her, just becoming part of the family."

The film takes place in the real-life apartment of the little girl who plays the protagonist, Pihu.

The film crew stayed for 2 weeks in the flat of Myra Vishwakarma, who plays Pihu. "I met Myra when she was one year, 10 months. I spent a lot of time just befriending her. When the crew came over, we introduced each member as paternal uncle, maternal aunt ... relations that she would recognize as her own," said Kapri. "Everything used on the sets – right from the home to her own clothes and toys, even the furniture like the water heater, etc is from the Vishwakarma household."

Kapri has warned viewers that this movie is not for the faint-hearted.

And that those left feeling disturbed by the trailer should watch with caution and think twice before sitting through the movie. There's definitely some reverse psychology going on here.

Becuase the warning is just making us want to watch even more.

After all, it's human nature to do the opposite of what you're told, right?

It seems that those who've plucked up the courage to watch have been left terrified.

Despite how disturbing and stressful the movie is, many viewers have scored it highly. But the weak-hearted amongst us have been advised against giving it a watch.

It's also had viewers cringing during one particular scene.

The balcony shot, which sees the toddler climbing up the balcony to try and retrieve a toy she dropped, had viewers on the edge of their seats in terror, helplessly watching the little girl who remains blissfully unaware that she could fall to her death at any given moment.

And many parents were riddled with anxiety for the whole duration.

Gut-wrenchingly, we bet some parents were imagining their own children in Pihu's shoes. A thought that is absolutely nightmarish.

Despite the unnerving scenes, people were very impressed with the movie.

I never thought a two-year-old protagonist could give me nerve-wracking chills. If you have kids at home, you must… https://t.co/E4km0mJbSv
— Charnnie Cha (@Charnnie Cha)1565152927.0

Like this user, who couldn't believe how the director managed to get the toddler to act.

And other reactions to the film were more, well, to the point.

Based on this description, the movie certainly seems to live up to its creepy and distressing label.

But, you can make up your own mind...

Check out the trailer above at your own peril. Pihu is currently available to watch on Netflix (but, if you come away feeling pretty disturbed, don't forget that you've been warned.)

And if you enjoyed Pihu, Netflix has plenty more horror-themed offerings that will be just up your street.

Like The Perfection, which is apparently so scary that it's left viewers vomiting. And we've got the trailer coming right up for you (if you think you can stomach it)...