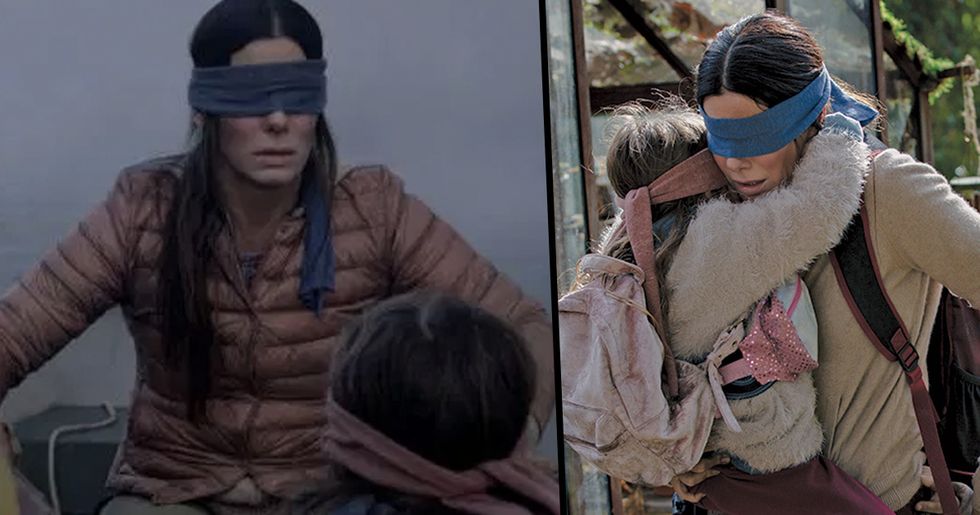 Everyone has been talking about new Netflix movie Bird Box. Some people are even calling it the scariest film ever.

The post-apocalyptic thriller follows the story of Malorie (Sandra Bullock), a pregnant woman experiencing the end of the world as we know it, and her blindfolded, dangerous journey five years later to find sanctuary with her children.

Invisible creatures are taking over every town. Anyone that looks directly at them commits violent suicide. The only way to go outside is in a blindfold, and people are dropping like flies. There is nowhere to run, nowhere to hide. And Malorie has two children to look after. I mean, is it any wonder people have been hiding behind their sofas in fear?

But Bird Box seems to have struck a particular chord with today’s public, and sparked a stream of memes and Twitter discussions. Let’s find out exactly what it is about the film that is causing people to name it the scariest film ever.

There are invisible creatures roaming earth.

Out of nowhere invisible monsters... or spirits (who even knows?!) come out of the woodwork. We don't know what they are, what shape they take, or where they have come from, which makes them even more scary.

And when you look at them, you kill yourself...

Oh yeah, and although these "things" are invisible, take one look at one and you are destined for a pretty certain suicide. We lose the largest part of the characters this way. Our main girl Malorie loses her sister pretty early on.

The suicides are pretty gory as well. The movie sees characters jumping in front of moving vehicles, shooting themselves, throwing themselves out of windows, and even stepping into a burning car.

But first you are overcome with overwhelming mental illness or depression.

So it seems people are driven to suicide after being struck by an intense wave of depression. As if dying wasn't bad enough.

These days the world is a lot more aware of mental health issues. A lot of people suffer with forms of anxiety or depression. Perhaps the film strikes a chord with people on this topic.

One of the scariest thing about these monsters is that they don't discriminate. Anyone that looks at them will reach the same fate. No-one is safe.

Yes that's right, even big, hunky men die when they look at the "things". Poor Tom (Trevante Rhodes). And you died trying to save Malorie and the kids *sniff*.

And it looks like the monsters have spread pretty much everywhere in the world.

Another terrifying aspect of the movie is that it seems these creatures have spread world wide. Starting in Russia they spread across to North America and show no signs of stopping. There is no escape!

Once someone has "seen", it is impossible to save them.

As soon as people look at the monsters there is no turning back. They seem to affect the brains of the victims and you can identify who has been affected from a change to their eyes.

So you might have to watch your loved ones die.

An unfortunate side effect of this is that we have to watch many heart wrenching scenes of people losing their loved ones right in front of them. The film sure knows how to tug at the heart strings.

You have to stay indoors.

With everything going on outside, inside a locked house is the only safe haven. With blinds and shutters down, and doors locked, you can't catch a glimpse of the creatures. Make sure you  don't watch a video of one either as, spoiler alert, you still die.

Or go out in a blindfold.

But eventually someone has to venture outside for supplies. In this case its important to wear a blindfold, but good luck driving, and don't get tempted to take a peek.

And we can guess how hard it would be not to look.

This twitter user sums up human curiosity a bit too well. Would you be able to not look?

But that leaves you pretty vulnerable.

Losing a sense definitely makes us less powerful. It's a lot harder to protect yourself against something you can't look at. The idea of being blind is also something we can all imagine and its a scary thought.

Especially as there is a group of people affected differently by the "beings".

There is a small section of society that don't die when they see the creatures and they think what they see is beautiful. It is unclear exactly who these people are but it is suggested that people from mental institutions are affected this way. Perhaps they have already seen the darkest things imaginable?

And they will try and make you look.

In fact, these people think what they have seen is so beautiful, they become obsessed with making others see too. They pull off peoples blindfolds and force them to look at the creatures. They are essentially sending people to their deaths. Not the greatest people to have around in this situation.

So, you basically can’t trust anyone else.

We learn this with seemingly sympathetic character Gary (Tom Hollander). A group of people let him into their safe house, and he does a pretty good impression of being one them. That is until he opens all the windows and kills off almost everyone. We should have listened to Douglas (John Malkovich).

Its one thing fearing for your own life, but Malorie also has to look after and protect not one, but TWO, babies. Her own, and also the child of newly met friend Olympia, who dies just after the two ladies give birth together.

And at one stage has to choose one of them to “look".

The film follows Malorie's journey to a safe place five years later, when the children are older. They have to take on a treacherous journey down the wild river, blindfolded. One child will have to "look" to navigate the rapids, and Malorie must choose who. Talk about Sophie's choice.

The “things" make you hear false voices of your loved ones.

To add another layer of fear to this terrifying reality, these monsters can replicate the voices of your loved ones, dead or alive. And try and convince you to take of your blindfold.

Does it incite fear of losing our minds?

Hearing terrifying voices in your head that know just how to appeal to your worst fears. Does this trigger an innate fear losing our minds?

Does the story allude to today’s world?

Heading into a progressively more dangerous world, that is becoming scarier and less livable. Could this represent the current political climate? Or perhaps environmental problems?

Could it be about religion?

There is little information about what these creatures are. Could they all be an allegory for something else? Perhaps religion, some people follow it blindly and want others to do the same?

Or could the creatures represent social media? We are all so obsessed with it and it is almost impossible to avoid.

It seems to resonate with modern day mothers

New mothers, along with the usual worries of parenthood, now have to deal with bringing children into a world with political and environmental tensions. Malorie is also a single mother, mirroring many modern day family situations.

So basically, what a great time to be blind.

Usually being blind will make life harder, but in this case, it might just save your life. When Malorie finally reaches a safe community at the end, the twist is that it is a school for the blind. A group that is immune to the monsters.

And have a newfound respect for birds

We should probably address the birds in the movie that have given it its title. Birds can detect the creatures without seeing them. They squawk and flap their wings when the monsters are near and so play a vital role in the film, warning people of the creatures. Hats off to the birds.

The movie really kept people on the edges of their seats.

The stream of Twitter comments and memes highlight how Bird Box kept us jumping and gasping all the way through. I'm not going to lie, I was a nervous wreck at the end.

Looks like people were so scared they are taking the necessary precautions.

It was so scary we can't stop imagining it in our real lives. Have you found yourself preparing for the worst?

What would make you take your blindfold off?

So, there is  one final question we have all been asking. Is there anything that would make you take your blindfold off?