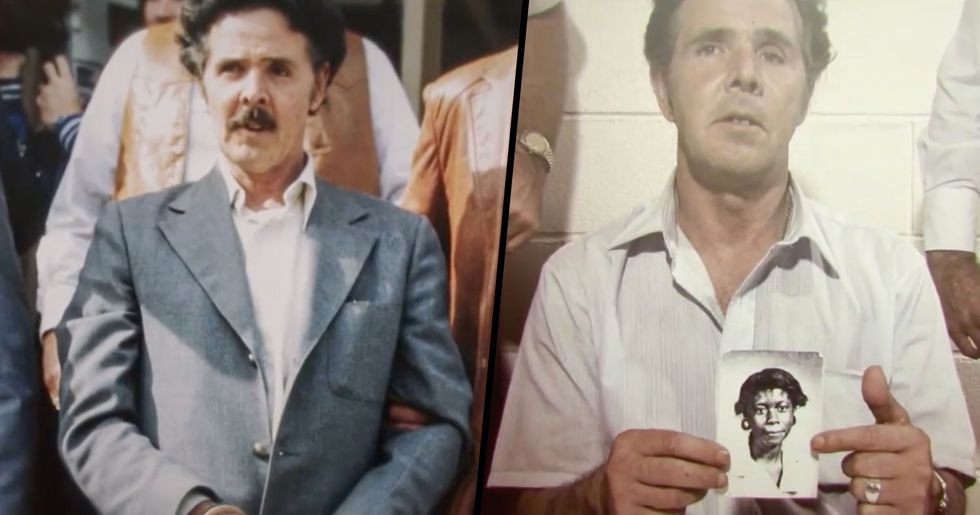 Over the years, the world seems to have become obsessed with all things true-crime. From the harrowing to the shocking, many of us have a weird fascination for some of the most gruesome and horrifying cases out there.

To satisfy our true crime cravings, there's one place we can always count on - Netflix. The streaming giant well and truly knows how to excel in the genre and has produced some of the most binge-worthy docu-series, based on everything spanning unsolved mysteries and serial killers to cults and conspiracies.

But the site's upcoming drop, exploring the "most prolific serial killer in history,"  is set to be one of its best yet. The Confession Killer centers on serial killer, Henry Lee Lucas, who famously confessed to over six-hundred killings in spine-chilling detail. But his case takes a bizarre turn as viewers get a closer look at his so-called "confessions."

Keep scrolling to watch the trailer for the upcoming harrowing docu-series and learn why it is a must-watch for any true crime fan...

The streaming service always kills it when it comes to true crime documentaries.

The world seems to have become suitably obsessed with the genre.

And thanks to Netflix, we now have a huge catalog of true crime offerings at our fingertips.

The Confession Tapes, for example, explored what causes people to falsely confess to crimes that they didn’t commit.

The show was an instant hit, proving popular amongst true crime fanatics.

Shocking docuseries The Keepers had us on the edge of our seats...

The series explores the harrowing unsolved disappearance and murder of the beloved nun, Cathy Cesnik, in Baltimore in 1969.

And who could forget?

Making a Murderer may be the documentary series that we can credit with reinvigorating the genre. It kick-started all of our obsessions with anything dark and grisly.

But the streaming giant's upcoming drop is set to be one of the most bizarre and intriguing yet...

Netflix released the teaser trailer for its new true-crime series The Confession Killer and fans are already desperate to watch the full thing.

The series centers on "the most prolific serial killer of our time."

The series takes an in-depth look at Henry Lee Lucas, who, in the 1980s, shocked the world when he confessed to killing over six-hundred people.

In 1960, Lucas, from Texas, was arrested and convicted for the murder of his mother.

He was sentenced to twenty to forty years in prison for murdering his mother and was sent to Jackson State Penitentiary in southern Michigan, but after 2 attempted suicides, he was admitted to Ionia State Mental Hospital. He was then paroled in 1970 after serving 10 years.

But this is when his story takes a bizarre turn, as, when interviewed by cops, he makes harrowing confessions claiming to have killed hundreds of people in every way imaginable.

He then became known as "The Confession Killer."

He gave spine-chillingly detailed descriptions of his killings, even going so far as to draw some of the victims. Using these confessions,  police were able to close several cold cases.

He reaped several benefits from providing the police with vital information.

Lucas was given confession interview "privileges" including being fed steaks, milkshakes, and given tranquilizers.

"They didn't treat him as a killer but as a friend."

"Henry never lived so good, every day they brought him a strawberry milkshake. It was like he was a movie star," the voiceover from the documentary series trailer exclaims.

But things weren't adding up...

Though he would later be convicted of killing eleven people and sentenced to death, several journalists, lawyers, and other experts started to look into his so-called "confessions" and found that something wasn't quite right.

An investigation carried out by the Dallas Times Herald revealed some startling findings...

The investigation shows that some of the killings Lucas confessed to, he couldn't possibly have carried out.
But the police, including the Texas Rangers he spoke to, stood by the confessions and defended Lucas' convictions.

The 5-part documentary series will put the bizarre case under the magnifying glass and give viewers a detailed look at the confessions and the American justice system at the time.

The series is the latest work from critically acclaimed documentary director, Robert Kenner.

"It’s really a psychological drama. That’s what drew me to it so strongly," Kenner explained.

Feeling ready to delve in? Watch the trailer below to get a taste of what's to come.

The Confession Killer hits Netflix on 6th December 2019. The series isn't the only tantalizing new drop to hit the platform. Viewers have been getting their teeth into a gripping new documentary named The Devil Next Door, which explores the case of John Demjanjuk, who was accused of being the infamous concentration camp guard - Ivan The Terrible. Keep scrolling to learn more.