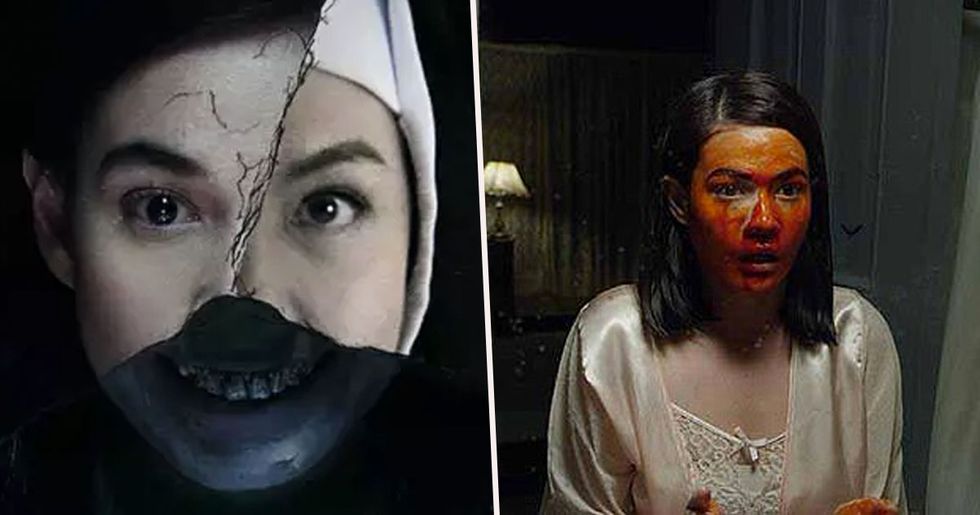 We can always count on Netflix to deliver us content that will keep us glued to our screens for days on end. And when it comes to horror, the streaming giant really surpasses expectations. Whether it's allowing us to view that classic scary movie that we haven't dug out since 2008, or terrifying us with its own original releases (remember The Haunting of Hill House?), the streaming platform consistently pushes the boat out with the love-hate genre.

The latest horror movie that everyone's talking about? Eerie.

Of course, we all watch horror movies to be scared or to get some kind of weird adrenaline rush, but it takes a lot to leave viewers genuinely traumatized. Well, since the film graced the platform, it seems to have struck this particular chord with viewers, as they've been left feeling "haunted" and unable to sleep.

For those brave enough to be tempted to watch, we've got the trailer coming right up for you. Just keep scrolling (at your own risk)...

It's a strange feeling to actually enjoy being scared, but the avid horror movie fans amongst us will understand exactly where we're coming from.

A well-executed horror can leave us feeling suitably terrified.

You know the drill - lights out (to maximize the creepy atmosphere, of course), popcorn at the ready, and cushion nearby to allow easy access for covering your eyes during that long-anticipated jump scare.

Once you've conquered one fear-inducing movie, you move onto the next that's even more terrifying. The scarier the better.

And the latest movie giving us that spine-tingling horror fix?

The movie, directed by Mikhail Red, was released in Philippine cinemas and around Asia in March.

But it's just made its Netflix debut.

Luckily, the horrifying new film is available right at our fingertips after Star Cinema announced the news that it was coming to Netflix globally last month.

A lot more thought has gone into it than you'd think...

FUN FACT: Do you know that #NETFLIX's algorithm changes the display image for #EERIE depending on your personal vie… https://t.co/5LoY8tvm72
— Mikhail Red (@Mikhail Red)1564200330.0

Director, Mikhail Red, told fans that the streaming giant's algorithm changes the display image for the movie depending on your personal viewing habits - meaning there's more than 1 terrifying front cover to look at.

And the movie is giving everyone the creeps.

To know what you're in store for, look no further than the name - this movie is well and truly eerie (in fact, that's probably an understatement.)

Eerie centers around the unexpected and gruesome death of a student in a Catholic all-girls school.

After student, Erika, dies in an apparent suicide, a whole can of worms is opened at the school.

Students begin to report that Erika's ghost is haunting the halls.

Which prompts the school's clairvoyant counselor, Patricia, to attempt to investigate what happened to her, leaning on Erika's ghost to uncover the truth behind the old school's abusive past and its strict head, Mother Alice.

But there's something even more terrifying in store.

As this article is spoiler-free, all that we'll say is that, according to the movie's imdb: "Pat uncovers the secret of the school and the horrifying monster that it nurtured for the past century." We honestly dread to think what that monster is...

It looks like even the most seasoned horror pros are feeling shaken by the movie.

Eerie has been soliciting some rather strong reactions from the internet, who are both impressed and petrified by the movie.

While watching the movie, one fan struggled not to scream.

Horror movies typically set out to scare us, and it seems, for this movie, it's mission has been well and truly accomplished -  provoking quite the fear-ridden reaction from viewers.

People have been struggling to sleep.

Like this user, who'll be racking up quite a hefty electricity bill from sleeping with the lights on for the next week. But we can't say we blame them... there's something quite unnerving about the dark, specifically the shadows that lurk in it, after watching a horror movie.

Some people's reactions were more to the point.

Like this succinct description, which pretty much sums up how we all feel about scary movies.

Even dedicated horror-fans were impressed by the movie.

When you've watched virtually every horror movie to grace screens, it takes a lot to wow you. But this movie seems to have resonated with even the toughest of horror critics.

Others praised the movie for not being cliché.

We all know that many horror films use the same old recycled plots and jump scares, leaving little to rave about. But this user was particularly impressed by how well-written and non-cliché the movie was.

Eerie is joining a growing list of Netflix horrors that are both haunting and impressing fans.

Releases such as Bollywood's "disturbing" movie Phiu and The Perfection - which supposedly left viewers vomiting, have all gained the attention of horror fans online.

Take a look at the trailer for Eerie for yourself...

The movie is available on Netflix worldwide right now.

But if Eerie isn't cutting it for you, don't worry...

We've got all your horror-related needs covered, as we countdown the top 10 horror movies on Netflix. Keep scrolling to find some inspiration for your next horror-movie night, if you dare...