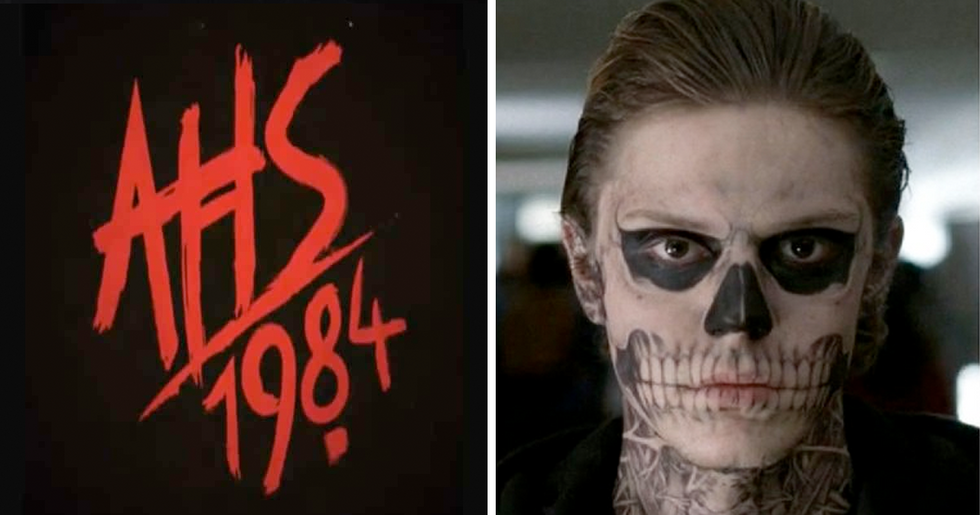 American Horror Story is known for being one of the most innovative, immersive and spine-tingling shows on TV.

It takes a cast and re-imagines them as different characters from one season to another.

This means the show can explore some of the most frightening settings for a horror in both time and space.

The show which first launched in 2011, it has since found different ways of freaking viewers out.

Over the years, we've seen all the horror classics from a haunted old mansion, a coven of witches and even a circus freak show.

Put it this way, if you have a fear, American Horror Story will find a way to exploit it.

Now approaching its ninth season, the creators have come up with a truly original (and super interesting) premise for the next instalment and the internet is super excited.

American Horror Story has been freaking out viewers since 2011.

It was designed as an anthology horror show meaning each series works as its own independent miniseries - although often the same actors appear across multiple worlds.

Just look at the titles for the seasons - they're honestly some of the most frightening names we've ever seen on television.

The show forces us to confront our deepest and darkest fears.

It also asks us exactly why our fears frighten us so much.

The show almost acts as a compendium of horror tropes.

If there's a symbol that commonly appears in the horror genre, you can bet that American Horror Story will have included it.

Over the years, some huge stars have appeared on the show.

Stars like Ariana Grande, Lady Gaga and Emma Roberts have featured on the show. Jessica Lange has even become closely associated with the programme.

It was based around an old haunted mansion based in Los Angeles where many horrific murders had taken place.

After the series' success, it was decided to continue the show but in another direction.

Rather than carrying on with the same characters, the entire world of American Horror Story changed. Series two titled "Asylum" was set in a mental hospital in Massachusetts in 1964.

In the third series, the show really picked up steam.

"Coven," set in contemporary New Orleans followed a group of young witches and had an all-star cast.

"Coven" was followed by "Freak Show."

"Freak Show" was, as the name suggests, based around one of the last remaining freak shows operating in Florida in 1952.

In the fifth season, we got the first Gaga appearance.

The season named "Hotel," focused on a variety of guests and employees of a pretty supernatural destination.

Following this was "Roanoke."

The sixth season, set in contemporary North Carolina follows the paranormal story of a haunted farmhouse.

Set in 2017, the story tells a fictionalized version of events following the 2016 US Presidential election. It's very scary.

Which brings us to the most recent series released in 2018.

The season named "Apocalypse" had a surprising twist which left some viewers shaken. The crossover season brought back characters from "Coven" and "Murder House" to battle against the Antichrist.

It's safe to say the show has some loyal fans.

In fact, the internet seems to have a collective crush on one particular star of American Horror Story - Evan Peters.

The most recent series was a clever way to reel fans back in.

#AHSApocalpyse Me trying to predict how coven and murderhouse will play into the show https://t.co/UbtMLJajdk
— Patrick Martin (@Patrick Martin)1536806610.0

The repetition of characters which had so far not been seen in the show sought to bring back old fans. Plus, get everyone thinking about how the storylines would link.

Many saw the most recent series as a return to the show's true form.

There had been some lagging in critical reception and viewership but it seems American Horror Story is finding its feet again.

And the announcement of the ninth series has got people excited.

The trailer dropped today revealing the theme for the upcoming season and it's safe to say, it's a hit with both horror and AHS fans alike.

It's designed to pay homage to the golden era of slasher movies which many horror fans remember fondly.

This is a much-anticipated season.

Many can't believe that this isn't something American Horror Story has based a season on already, as it's such a huge horror sub-genre.

It's safe to say people are excited.

It's going to be super interesting to see how the American Horror Story creators put their own signature twist on this popular style.

Many are being drawn in.

@TwitterMoments I actually may watch this season. I love slasher films. Plus the first season was the only good season of this show.
— Paul J (@Paul J)1554935438.0

It seems that even people who aren't fans of American Horror Story will be likely to tune in, thanks to this genius season theme.

Some old fans are coming back.

Many loved the show's first few seasons but thought it had lost its way in recent years. They are hoping "1984" signals a return to form.

Of course, there were some funny reactions too.

The trailer does have a parody element to it but that's what makes American Horror Story so great!

However, not everyone's happy with the news.

Because the season announcement also comes with some sad information about the show's cast.

Two fan favorites will not be returning.

Both Jessica Lange and internet sweetheart Evan Peters have confirmed they will not be starring in American Horror Story season nine.

But there is some good cast-related news.

Sarah Paulson will be in "1984" - which may be enough to tempt fans to come back and give it a chance.

Because it seems fans just can't quit the show.

And just as some were prepared to give up completely, American Horror Story drops its best trailer yet.

Here's the trailer everyone's talking about.

It depicts an eerie nighttime chase and perfectly sums up the slasher movie theme.

We have to say, it looks amazing.

Taking on a horror classic then giving it a new (and terrifying) spin is what American Horror Story does best.

We can't wait to tune in.

Although no dates have been confirmed, based on past seasons, we can expect "1984" this fall. We're excited already!