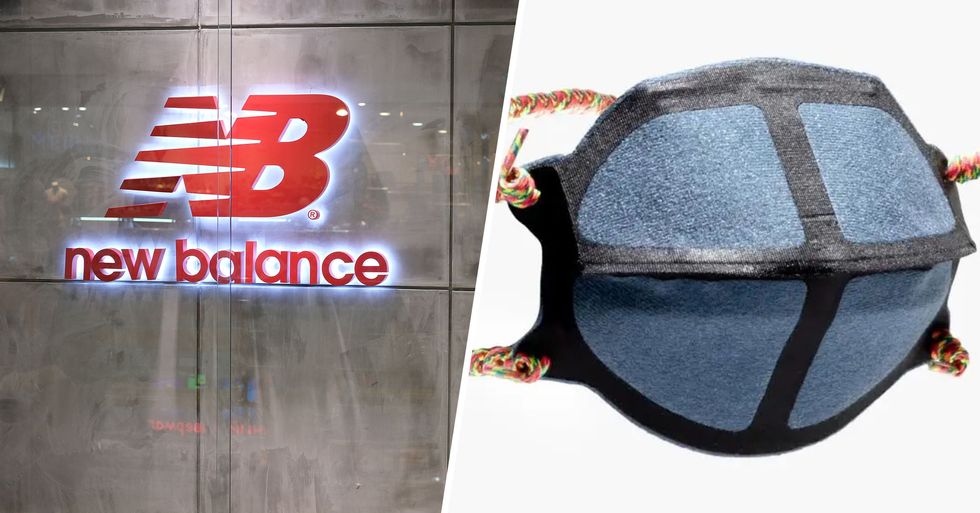 New Balance Making Protective Masks for Those Who Need Them

New Balance is well known for its retro sneakers, but their ethos is far from old-fashioned.

Despite the controversy surrounding the brand, the American shoe giant has volunteered to support front line workers amid the medical crisis.

Could this be the come-back they needed from their devastating backlash?

New Balance is known for much more than it's footwear.

While they might have started out manufacturing sports apparel, they represent much more than that.

The big-name shoe brand uses it's following to raise awareness about issues within the sports community.

Although, no big corporation can go without its controversies.

A whole host of influential athletes have worked with the brand.

Using their leverage to inspire fans to get moving, and it's working!

The brand's footwear is pretty awesome...

While they might not be as mainstream as other big brands, that's what gives the trainers their appeal. Let's have a look at some of the most popular pairs right now...

If you've never owned a pair of these, what are you doing? They're every wardrobe's staple and I'd recommend you get your hands on them ASAP.

The most popular of the brands Retro sneakers is this bad boy...

Their "Made in US 998," is arguably one of the most trendsetting silhouettes in the iconic 990 series.

But they're not just for show...

They're also one of the first brands to bring out "Fresh Foam" technology, providing runners and athletes alike, a cushioned bounce for optimum comfort.

These even glow in the dark!

I mean you can't really ask for much more...

New balance might have some rivals, but they stay true to their promise of high-quality sneakers to "aid athletes in their pursuit of excellence."

Whether it's to add a quirky pop of color to your outfit, or you're serious about sports, they have sneakers for every occasion.

They truly cater for everyone.

New balance has been named the best shoe for health care workers because we all know how physically demanding the occupation is.

They provide support for long shifts.

Which is essential in the field of nursing, preventing ankle sprains, bunions, plantar fasciitis, and so much more.

New Balance isn't one to shy away from a worthy cause.

Like their #nbgivesback initiative, aiming to "improve the health and well-being of children and families worldwide."

The companies latest move isn't really out of character.

Working in tandem with local medical institutions, New Balance produced its first prototype, which they are planning to distribute to the hospital community.

But not everyone is impressed by their new move...

@NBGivesBack If you want to support our communities stop funding @SenatorCollins who refuses to stand up to trump.… https://t.co/e8I5Rc1PXn
— Sardonic Tonic (@Sardonic Tonic)1585798784.0

New Balance founder and chairman Jim Davis' support for Donald Trump, created a scandal, causing the company to release a clarifying statement. "New Balance did not endorse a candidate in this presidential election or any other," it said.

Many people were ready to boycott New Balance for their political movement.

But despite this, they've made a comeback.

The company revealed that elements of the brand’s footwear and apparel are being used to manufacture the PPE.

And the masks are pretty cool too.

Less than a week ago, we produced our first prototype in consultation with local medical institutions. Now, we’re a… https://t.co/difdaXQksr
— New Balance (@New Balance)1585922618.0

Most people are praising the brand for turning their attention to filling an essential need.

What a great move.

All hands on deck. Our U.S. factories are working to develop, manufacture and deliver facial masks to the hospital… https://t.co/tzGSuXMEUB
— New Balance (@New Balance)1585355908.0

The company said in a statement: "This is not a commercial opportunity, NB is pursuing break-even pricing and/or donations for the face mask." On top of the masks, New Balance is hoping to whip up other equipment like hospital gowns, foot coverings and other helpful items needed in hospitals.