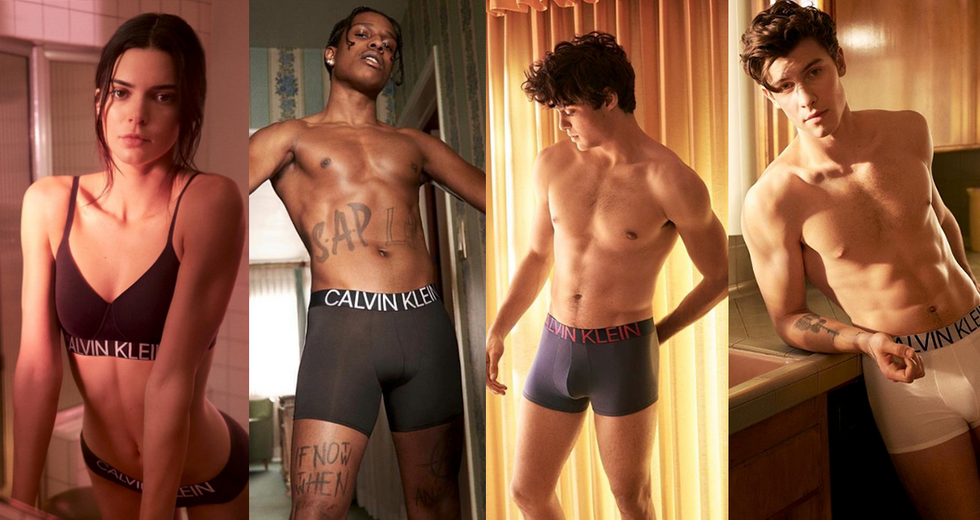 There's nothing new about celebrities modeling for major fashion designers and brands. It's probably the most natural thing since most celebrities look like they've been carved out of marble or sunshine. Maybe marble sunshine? Is that a thing? I digress.

The point is that celebs have been collaborating with fashion designers for ages. Quite often, the world of entertainment and fashion blend lines – really, they're both a part of the same bubble, right? Celebs will often become muses for fashion designers. Relationships are formed, collaborations are created, and the viewers at home will watch it unfold with burning jealousy. No? Just me? Cool, that's fine.

The point is: fashion and celebrity go hand-in-hand. So it's not surprising when a musician or an actor will partner with a designer and leave us all breathless. Which is exactly what happened with this new Calvin Klein campaign, #MyCalvins. We can't take the beauty of this campaign. Someone, quick! Resuscitate us!

A young Mark Wahlberg was a fan of showing off his Calvins.

During the '90s, Wahlberg aka "Marky Mark" became the face of the Calvin Klein boxer brief, which was pioneered by the head of menswear design, John Varvatos. With the celebrity aspect of Wahlberg modeling the underwear, these new "boxer briefs" totally revolutionized the underwear industry.

Clearly, sticking an attractive celeb in underwear was a great idea for a campaign.

And it's something that Calvin Klein continues to do. For example - the new campaign #MyCalvins stars a bunch of hot celebs.

This week, musician Shawn Mendes posted these two pictures on his Instagram.

Ummm. Shawn Mendes is truly working this new campaign! Make sure you scroll to see both hotter-than-hot pics.

“I think that youth, and this generation in general, are speaking so loudly, and people are listening more than ever," Mendes said in the 2019 campaign.

After Mendes tweeted about the campaign, people (predictably) freaked out.

The thirst is real! Who needs a drink of water?

People are fully losing their minds.

And duh. I mean, just look at the photos. Shawn Mendes is a straight-up model.

And here's the good news! He's not the only one!

Rejoice in the name of underwear. Heartthrob Noah Centineo is also part of the campaign.

The 'To All the Boys I've Loved Before' star models as well as he acts.

Hubba hubba. “I think youth is a thing, regardless of age, that looks at the world, that looks at a scenario, and flips it on its head and goes, ‘that might not be right. How can we do that better?" Centineo said in the campaign.

HOW IS HE SO CUTE?

He's the skater boy of our dreams. We can't take it.

And we love him. His little smile!

Goodbye. We are deceased.

One Instagram user said it best. "Thanks for making my day so much better." Amen.

People feel some type of way about his ad.

People were not coy about how they felt when they saw these pictures.

People are dying and it's hilarious.

#MyCalvins campaign? More like #ThirstTrap campaign, am I right?

Doesn't Calvin Klein know that our hearts can't take it? The internet is collectively having one giant heart palpitation.

My official statement on Noah Centineo’s Calvin Klein shoot. I will be making no further comment at this time: https://t.co/fIVilKj3wJ
— Abby Loisel (@Abby Loisel)1550604481.0

This is a big, big mood.

Actually, all the tweets in response to this campaign are big moods.

Yep, this pretty much says it all. Goodness, gracious.

All of our reactions when we saw the campaign:

We definitely all made this face when we saw Noah Centineo in Calvin Klein underwear.

How much fanfiction will come out of this ad, for real? I'm guessing it's going to be a lot. Even more than already exists, to be honest.

Calvin Klein is trying to give us all heart attacks.

And it doesn't end there! It gets even better.

Because A$AP Rocky is also part of the campaign.

I mean, there are literally no words. There is nothing hotter than A$AP Rocky in this photo.

Is it hotter in here, all of a sudden?

Who doesn't want a shirtless A$AP Rocky waiting for them on their roof? This is what dreams are made of.

How can one campaign be so perfect?

Someone needs to bring us back to life, ASAP. (Pun intended.)

The reaction to the pics is almost better than the pics themselves.

Everyone cannot stop freaking out. None of us will be the same after these photos.

Everybody is fully in love.

How many times can someone faint in the span of just a few minutes? Asking for a friend.

The campaign doesn't even stop there. Nope.

The gorgeous Kendall Jenner is also part of the campaign.

And she looks fabulous.

But it's no surprise since everyone in the Kardashian-Jenner expanded universe is pretty gorgeous.

This campaign has made the internet lose their mind.

And there's no end in sight to the madness. It seems like people are just going to continue to freak out over the sheer hotness of the campaign.

A truly wonderful moment for the internet.

Every one is talking about Shawn mendes X Calvin Klein but can we take a moment to appreciate ASAP ROCKY X CALVIN K… https://t.co/i9jqq6ZLwF
— Female Titan 🖤 (@Female Titan 🖤)1550582801.0

And for Calvin Klein, I guess. But more importantly, for all of us and our eyes! Share this with your friend who will most likely faint because of how hot these pictures are.