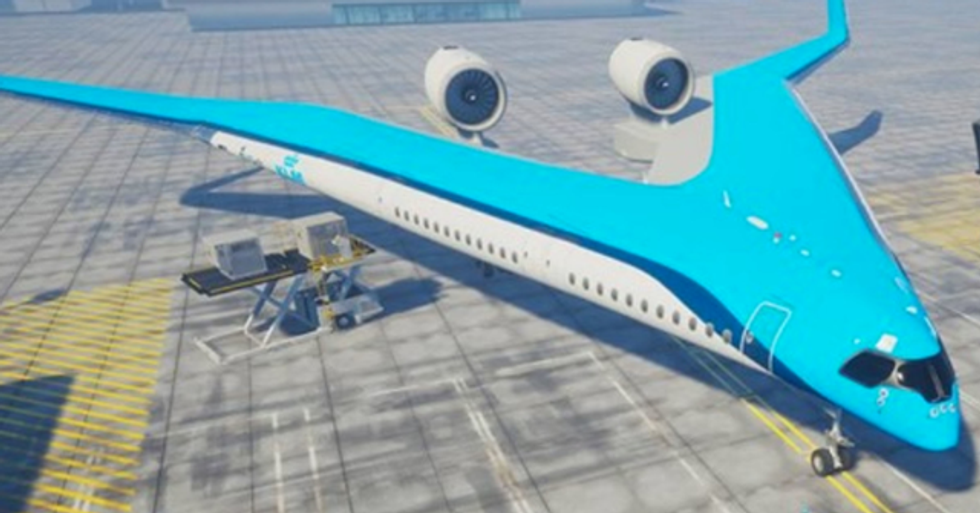 There has been a groundbreaking development in the world of aviation...

And it is set to change air travel forever.

Footage has been released today that shows a prototype of the world's first-ever "Flying-V" plane taking to the skies.

Now, I'm sure most of you will have traveled on some sort of airplane in your time...

So you will most definitely be aware of the typical airplane layout and dimensions.

The standard airplane model we all know and love today- or hate, on long-haul flights - was designed back in 1902.

The model was inspired by their observation of birds...

The brothers had noticed how birds soared into the wind and that the air flowing over the curved surface of their wings created lift.

However, the brothers' breakthrough was their creation of a 3-axis control system...

Which enabled the pilot to steer the aircraft effectively and to maintain its stability.

This method remains standard on fixed-wing aircraft of all kinds.

All airplanes are designed and built with the "2 wings" dimension...

But now, there has been a development that could potentially scrap this traditional design for all future aircraft models.

Dutch airline, KLM, and the Delft University of Technology have funded the research and design for a whole new type of aircraft...

And it could very well revolutionalize all future air travel.

It really is something, isn't it?

Now, the Flying-V isn't actually a to-scale airplane just yet, but the prototype model has now been successfully built.

And, last month, the model made its debut flight in Germany.

KLM shared a video of the revolutionary flight, in which project lead, Roelof Vos, explains that the plane’s V-shape allows it to consume less fuel than a conventional "tube and wing" aircraft.

The prototype was designed to scale to prove that the unique craft would be able to fly...

And to test the response of the airplane when the pilot makes maneuvers.

The model took off with no complications...

And, as it rose gracefully into the sky, it was admittedly an incredibly odd sight.

But, despite how strange the new design may look...

Admittedly, the model's landing was a little bumpy...

And it resulted in damage to the nose wheel of the plane. KLM commented on the video after sharing it on YouTube, explaining that the damage was due to "a gust of wind and the pilot’s response to this." The company added, "This is common practice with scaled model test flights. (It’s estimated that one out of two scaled aircraft gets damaged this way.)"

But, overall, the flight was deemed a success.

"And then, to have it confirmed that it flies, all of that hard work, it was worth putting in all of the hours making sure everything’s correct and built properly, built accurately, and it pays off."

KLM said the model is now being repaired and prepared for a series of subsequent test flights...

But it is now also up to KLM and TU Delft to build a full-sized version of the craft – a project that is predicted to take years and cost billions of dollars.

Here's to a whole new world of V-shaped air travel! For more on the sometimes uncomfortable world of aviation, keep scrolling to read the best hacks for making long-haul flights that little bit more bearable...