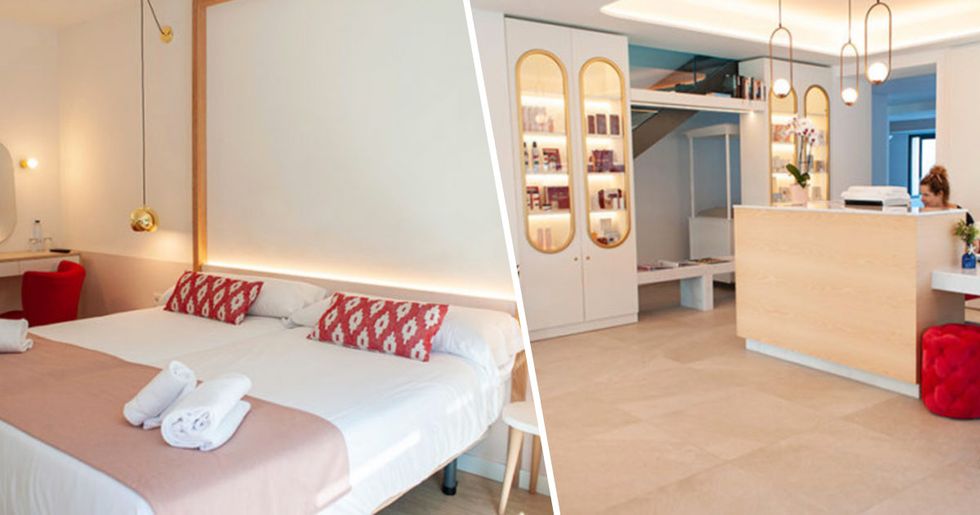 When it's time to go on vacation, the majority of us go away to escape reality for a week or two and take the time to relax and do absolutely nothing.

Choosing the perfect hotel can often take a lot of time as, let's face it, there's nothing worse than being in a foreign country and being dropped off at a 2 star hotel, right?

But what about women out there who want to stay in a hotel that is exclusive for women only?

A hotel in Mallorca, Spain, has recently opened and it only allows female guests to stay. Intrigued? Keep scrolling...

Safety when traveling is one of the most important things...

Especially for solo travelers, traveling around the world holds many dangers.

Female travelers are at a particular risk.

It is a sad reality that women who are alone are targeted by robbers, predators, and individuals who wish to cause harm to others.

Women are now traveling solo more than ever.

According to the Travel Industry Association, 32 million American women travel alone every year, despite this being such a risky endeavor.

Despite the low statistical risk of being killed whilst on vacation..

A number of highly publicized incidents have underscored the risks that come with women traveling alone. This includes the murder of a twenty-six-year-old German backpacker in Thailand earlier this year, the brutal assault on a woman at a hotel in the Dominican Republic in January, and the beheading of 2 Scandanavian hikers in Morocco last year.

It has been acknowledged that women face a harder time when traveling alone than men do...

The President of WorldAware, a global risk management provider for companies, told the Los Angeles Times that it is actually "one hundred percent easier to be a man" when traveling rather than a woman.

Because men are the main culprits when these horrific crimes are committed...

It's no wonder that women often feel uncomfortable when staying in hostels or hotels alone when they are surrounded by unknown and strange men.

Attempts to tackle this issue have been made...

The index was designed to rank countries from the safest to the most dangerous...

Speaking to Forbes, Lyric Ferguson said: "While traveling as a couple we've experienced some uncomfortable situations and we've heard horror stories from many solo female travelers." "Rather than relying on hearsay and anecdotes, we thought it would be good to know which countries are the worst and safest based on hard facts."

Factors that affect women were taken into consideration...

Women shouldn't have to rely on an index in order to enjoy a vacation...

It seems barbaric that women simply cannot travel the way that they please because of threats posed by men, but it is currently a sad reality and too many women traveling alone have lost their lives at the hands of cruel individuals.

Many women feel unsafe staying in hostels and hotels...

Especially as the rates of assault are sky-rocketing among tourists staying in hotels, a lot of women simply don't feel comfortable knowing that complete strangers can easily gain access to their rooms.

So what about a hotel exclusively for women?

A hotel has recently opened in Mallorca in Spain that strictly welcomes female guests only.

Hotel Som Dona is the first hotel of its kind in Spain...

It offers a luxurious getaway location for women aged fourteen up, and, according to the website, it is a "new space for women who are looking to disconnect from the stress of daily life that offers personalized care tailored to their needs."

It has been designed around everything a woman wants from a vacation...

The hotel is equipped with thirty-nine rooms, free WiFi, a pool, a wellness area, a bar lounge, and a "unique atmosphere designed for women."

Any woman is welcome...

The hotel is open to all women: whether that's solo travelers, couples, families, or larger groups of friends.

One of the hotel’s major focuses is its local and flexitarian gastronomy, offering up "a sensory experience of local and international cuisine created with seasonal products." They call it the "perfect balance between healthy and delicious food" – meaning no junk food!

The stunning bedrooms come equipped with an ocean-view and essentials such as hairdryers, straighteners, and anti-fog mirrors. Guests can also enjoy massages, body beauty treatments, a whirlpool, solarium, and library.

The only exception in regards to the "no men" thing is the employees...

This is in line with Spanish gender discrimination laws - men are still hired by the hotel, but Som Dona hires women wherever possible.

The hotel wants to focus on female equality.

According to Som Hotel's president, Joan Enric Capellá, surveys showed that women were keen on the idea of an exclusive hotel, just for them. "One of our objectives is also to give a certain visibility to women doing traditionally masculine jobs," she said.

It seems that female-only hotels are becoming more and more popular...

Of course, not all women feel uncomfortable sharing a hotel with male guests. But, for those who do, hotels such as Som Dona are the perfect environments to be spending a relaxing vacation in. If you want to further understand why women often feel uncomfortable when they're alone, keep scrolling. One woman's Twitter thread went viral when she let the world know why women often "appear cold."