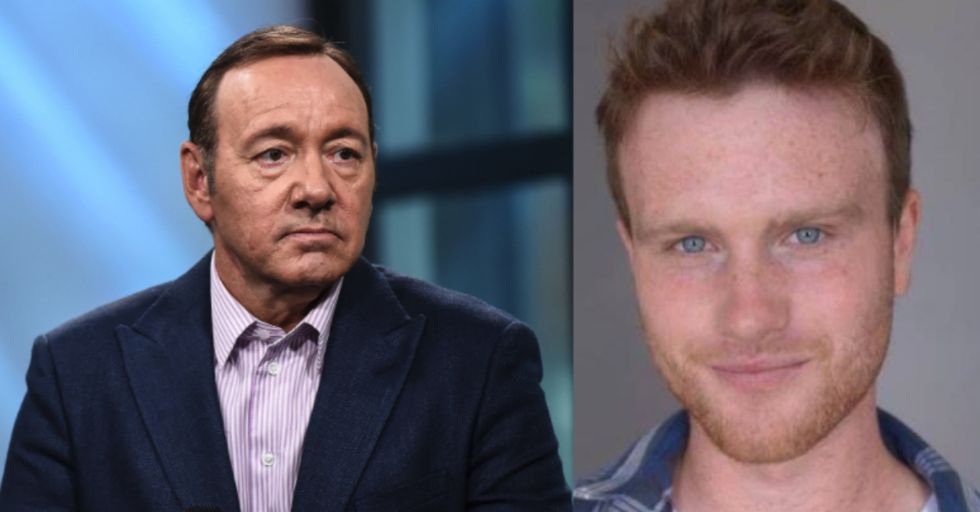 Last week, actor Anthony Rapp shared the story of attending a party when he was 14 years old and being propositioned for sex by then-26-year-old Kevin Spacey. (Yes, that was seriously just last week. Can you believe it?)

In the time since Rapp's story was shared, multiple people have come forward with additional allegations against Spacey, including at least eight people who worked with the actor on the Netflix show House of Cards. Spacey's agent and publicist have severed their relationships with him. He's currently being investigated by the London police. Netflix has suspended production on House of Cards. To sum up: Spacey's career is effectively over.

Harry Dreyfuss (seen here with his Oscar-winning father Richard) was 18 years old when Spacey assaulted him.

In an account published by BuzzFeed News, Dreyfuss says that at the age of 18, he was visiting London where his father was appearing in a play directed by Spacey. One evening, he tagged along with his father to Spacey's apartment to go over lines. "We were in Kevin’s kitchen when my dad ducked out for a moment to go to the bathroom," Dreyfuss said. "Kevin and I were looking out his window at the lights of London when he came to my side and asked me how my Christmas had been. I had had a terrible Christmas, I told him, because I was too shy." "After I’d told him that, Kevin slid his hand into mine. He wrapped his fingers between my fingers, and peered into my eyes, and warmly said, 'Don’t be shy.' Then, 'You’ll get over it.' I was stunned."

At first, Dreyfuss was struck by how nice Spacey was being to him. But everything took a turn when the three men went into Spacey's living room to read through lines.

Dreyfuss said that while his dad sat in a chair across the room, Spacey chose to sit "extremely close" to him on the couch. After a few minutes, Spacey put his hand on Dreyfuss' thigh. Dreyfuss finally became suspicious and got up from the couch to sit down on the other side of it. But that didn't stop Spacey. "Kevin stood up, too, and followed me. He sat just as close and immediately put his hand back on my thigh."

Once again, Dreyfuss stood up and moved back to his original position on the couch.

"I also added one more layer of protection," he said. "The moment I sat down, I firmly placed my own hands upon my thighs, palms down, claiming that territory for myself. "Once again Kevin followed me, sat down, and with considerable effort, slid his hand between my right hand and my right leg. He’d snuck in. At this point I didn’t think there was anything I could do short of alerting my dad to what was happening. But I didn’t want to start a feud between them. I didn’t want the play to be threatened. This job really mattered to my dad, and Kevin was his boss. And besides, I thought, He isn’t really doing anything wrong..."

Of course, Spacey was absolutely already doing something wrong. What he did next was even worse.

"Over the course of about 20 seconds, centimeter by centimeter, Kevin crawled his hand from my thigh over toward my crotch. My mind went blank. Suddenly, he had completed his journey and now he had all of me in his hand. I stopped reading the script and my eyes went wide. I lifted up my head and faced him. Looking into his eyes, I gave the most meager shake of my head that I could manage. I was trying to warn him without alerting my dad, who still had his eyes glued to the page. I thought I was protecting everyone. I was protecting my dad’s career. I was protecting Kevin, who my dad surely would have tried to punch. I was protecting myself, because I thought one day I’d want to work with this man. Kevin had no reaction and kept his hand there. My eyes went back to the script and I kept reading. "I don't know how long we sat there like that. It could have been as little as 20 seconds, or it could have been five minutes. It’s the hardest part of the story for me to recall. What I do remember is that, other than being a shy kid who obviously admired Kevin Spacey a lot, I never once gave him a signal that I would want to be with him in that way."

Dreyfuss shared that he was inspired to share his story by the many women who have come forward with allegations against Harvey Weinstein, as well as by people who shared their own stories as part of the #MeToo campaign.

"I came to see how important it is to add my voice to the people who are demanding a better world," he said. "A world in which powerful men are no longer allowed to feel safe to do this, or far worse. In retrospect, what disgusts me about Kevin was how safe he did feel. He knew he could fondle me in a room with my father and that I wouldn’t say a word. He knew I wouldn’t have had the guts. And I didn’t."

Dreyfuss' story has been met with tons of support from all over the world. His father has also shared how proud he is of his son.

I love my son @harrydreyfuss more than I could explain with all the words in the world. And I am so incredibly prou… https://t.co/dTBkW6x89G
— Richard Dreyfuss (@Richard Dreyfuss)1509842056.0

As stories like Dreyfuss' and others continue to come to light, let's hope they're all met with this level of support. Goodness knows they've already been through enough.