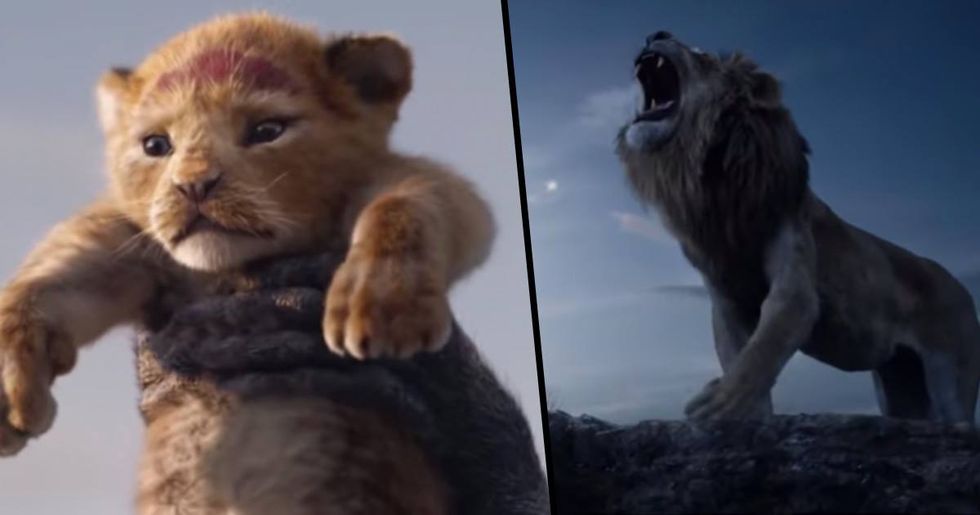 Nants ingonyama bagithi baba. Sithi uhm ingonyama. If you sang that in the tune of Lion King's 'Circle Of Life' you are officially a next level fan, or just fluent in Zulu. Either way, if you spent your entire childhood singing along to Timon and Pumbaa, used the phrase 'Hakuna Matata' in real life situations, and were truly terrified at the sheer sight of Scar - we have something you may want to see. That is, of course, if you haven't already.

The battle for Pride Rock isn't over quite yet. Because the iconic film, that was released back in 1994, is about to get a remake. The Disney movie,  set in the African savanna, is coming back to the big screen. And the release date? The 19th July 2019.

So if you haven't already - watch the damn trailer. Because people are getting a tad emotional about it, and everyone is saying the exact same thing.

The new Lion King trailer is out.

The story of Simba reclaiming Pride Rock is getting a makeover, and it's making everyone nostalgic.

Because it's one of Disney's best film.

With some banging songs. We just can't wait (to be King). And for July to come around so we can watch it at the cinema.

The 1994 version of the film, which was directed by Rob Minkoff and Roger Allers, grossed more than $968 million worldwide.

It's already got over nine million views, and it's hardly surprising. And the internet has gone wild.

Everyone said the same thing.

Honestly, we're all thinking it. How are going to deal with Mufasa's death in HD, when we're still not over his 1994-quality death?

It's a genuine concern.

Because Mufasa's death is perhaps the saddest thing to happen in a children's film, and it's caused a few tears.

And because it's not animation.

It makes his death all that more real - which is something we're not sure we can actually deal with.

Cause it quite literally ruined our childhood.

If you can get through Mufasa's death in 4K, you can survive anything: believe in yourself!

This time the comedian isn't kidding, because Mufasa's death is not something you can just joke about.

And the biggest villain of all is back.

The infamous villain, Scar, is what nightmares are made of. And he's back, which is pretty terrifying, to be honest. We're seriously not prepared.

Because we all remembered what he did.

Poor Mufasa. Letting your brother plummet into a stampede is pretty dark, but what do you expect from someone called Scar.

On a happier note.

The CGI is pretty impressive, and baby Simba is even more adorable than in the original.

If you were paying close attention to the trailer, you may have picked up on how similar it is to scenes from the original.

In fact, it's pretty much identical.

It didn't take fans long to notice how the trailer pays homage to the original film. They got it pretty spot on.

The attention to detail is faultless. Also, sorry for bringing up Mufasa's death again. We're still trying to process it.

There's a lot at stake.

Because it's a lot of people's favourite film. "They best not mess it up," one concerned fan tweeted.

But most people are staying positive.

Because if the trailer looks this good, just imagine how amazing the film is going to be.

And adults are equally excited about it.

We're all gonna be pushing through 5-year-olds to get to the front of the cinema line.

The trailer revealed some big names doing the character's voice-overs, which has gotten everybody even more excited for the film's release.

Yes, Queen B is taking some time from producing music and parenting to play the role of Nala - Simba's childhood best friend.

Otherwise known as Childish Gambino, the American actor, singer, and producer has been cast as the main character Simba.

Comedy actor, Seth Rogan will be playing the warthog Pumba. Honestly, this could be perhaps the funniest casting of all time.

We can't wait to see him sing Hakuna Matata.

The wise and intelligent Rafiki will be played by South African actor, director and playwright.

"Didn't your mother ever tell you not to play with your food?" Everyone's favourite bird will be played by comedian, actor, and writer John Oliver.

So who dared to play Scar?

The villain is being voiced by actor Chiwetel Ejiofor, who has also been cast in the Disney film Maleficent 2 - which comes out in 2020.

Eric Andre as Ed the Hyena.

The cackling hyena who, although bad, was hard to not laugh at, will be played by American comedian, actor, and TV host, Eric Andre.

We're sorry, we know we'd not bring Mufasa up again. This is the last time, I promise. Mufasa will be voiced by American actor James Earl Jones.

James Earl Jones also voiced the character of Mufasa in the original 1994 film. No wonder the trailer was so emotional.

So that's the cast.

Pretty exciting stuff. Don't forget, the film will be released on the 19th July 2019 in the US.