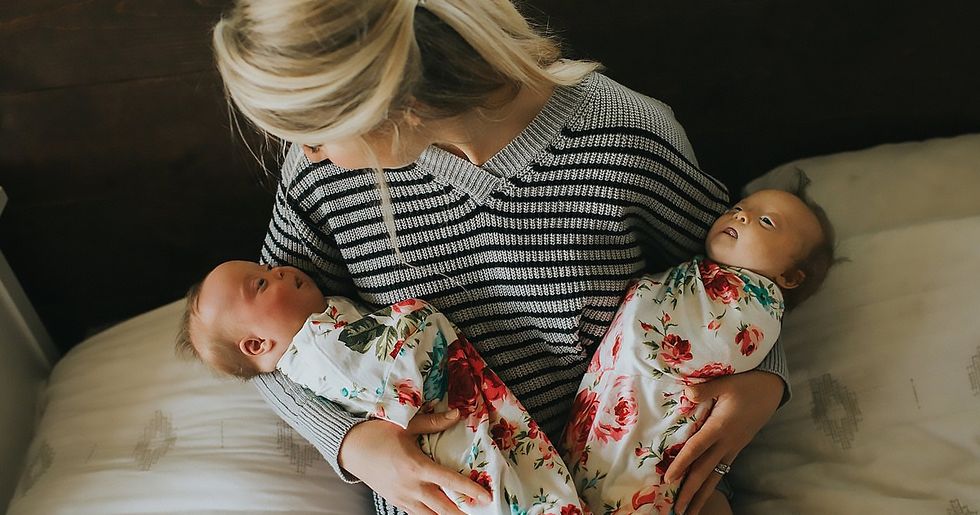 For anyone who is lucky enough to know someone with Down Syndrome or there is someone in your family with this disability, you know that their life is a true gift and they bring nothing but joy into your world. Although many people see this disability as, well, just that, it's entirely different when you get the chance to engage and converse with these amazing humans, and you realize that their disability is just a label that does not define them.

One mom opened up about what it was like to find out she was having twins, which is a pretty big deal, but she also learned that her two new baby girls would both have Down Syndrome.

In a heartwarming interview, mother Rachael Prescott opened up about the fear, doubt, and overall pure joy that came with her two new beautiful babies that are the cutest twins you've ever seen.

It's double the fun, double the giggles, and double the diapers, which isn't necessarily the fun part, but it's reality for sure.

Having two babies at once is a real surprise for some folks.

It's already exciting enough to have one baby, but sometimes two babies at once can be almost too much excitement to handle.

For Rachel and Cody Prescott, twins were a big surprise.

The Prescott family was hoping to have one more baby to add to their beautiful family of two young sons.

They wanted to give it one more try.

Cody decided to cancel his vasectomy in order to try for one more child, thinking they weren't finished just yet with having kids. They had no idea what was in store for their family!

The family was about to grow, a lot!

Easton, 5, and Hudson, 3, are healthy boys who had no idea they were going to have the privilege of being protective big brothers.

The had some positive news!

Rachel took an at home pregnancy test, confirming that she was indeed pregnant. Not only that but after a visit to the doctor, she found out she was having twin girls!

But there was some other news.

"A lovely nurse practitioner came to my bedside and first told me our girls did, in fact, have Down syndrome," Rachael said in an interview.

It was definitely shocking at first.

While this was not at all what Rachael and Cody were expecting, they were excited nonetheless.

Rachael was very upfront about how she felt.

She was mostly nervous about the fact that this birth was going to be wildly different than her first two, considering the health complications with the twins having congenital heart diseases and that she was having two babies at once.

She knew that this pregnancy would be a little different.

"My husband was elated to have twins from the beginning. I, however, started out terrified," Rachael shared, "mainly of delivering in the operating room and of potentially needing a Cesarean."

Family and friends were very supportive.

Thankfully, Rachael and Cody's friends and family were very supportive, which ultimately eased a lot of Rachael's worries. The family was more than excited to welcome these two baby girls into the world.

Charlotte and Annette, or Lottie and Nettie, were born at 35 weeks, just two minutes apart.

But the delivery process did have its complications.

Rachael was thankful that she got to give birth naturally, but soon after the girls were born, they had to be rushed to NICU.

Doctors had to act fast.

"They were then whisked away to the NICU for oxygen," Rachael explained. "I mourned not having those first moments of skin-to-skin or being able to nurse right after. Shortly after, I hemorrhaged, keeping me from seeing them even longer."

It was hard on Rachael to be away from her babies.

"Handing your child over to the hands of a surgeon always sucks," Rachael said. "It doesn't get easier with time or repetition. It's scary and miserable, yet necessary."

But these girls were fighters.

Rachael and her two strong baby girls stayed in the hospital for 47 days. Little Lottie had to have two heart surgeries and made it out of both of them, and her parents are beyond grateful.

They had two big brothers who couldn't wait to meet them.

The Prescott family was finally complete and Lottie and Nettie were home safe, ready to take on the world.

Children with Down Syndrome are often misunderstood.

Down syndrome is caused by an extra chromosome, has no known cause, and is not inherited. People often label those who have Down Syndrome and don't realize the true joy and kindness they have.

The chances of it happening depend on the age of the mother.

A 25-year-old mother has a 1 in 1,200 chance of having a baby with down syndrome, while a mother who is 49 has a 1 in 10 chance. The chances increase as the age of the mother gets higher.

They love to get dressed up, laugh, play outside, learn, and have fun. Thankfully, there are many organizations that empower people with Down Syndrome and raise awareness about their disability.

Rachael and Cody want to encourage other parents who have kids with Down Syndrome.

"I would love for all parents to know how lovely individuals with Down syndrome are BEFORE becoming expectant parents," Rachael proudly stated.

It's all about the extra love.

With twins, it's already double the love, and now with twins who have those special extra chromosomes, Rachael knew it was going to be a wonderful journey and wants to invite others to join in on the fun.

"If they knew how incredibly lucky they are to conceive a child with so much 'extra,' then perhaps we could discard the mourning that takes place so often at these diagnoses and more accurately replace it with celebration," said Rachael.

It's true that some parents have more fear than joy when they hear this news.

A lot of parents are nervous or fearful when they hear that their child has Down Syndrome, and Rachael wants to help those parents realize the joy that is coming their way.

"I advise connecting with other parents, because collectively we agree that to have a child with Down syndrome is like discovering your best self and winning the lottery at the same time," said Rachael.

Cody is equally as passionate about sharing true joys that come with Down Syndrome.

"I would rather someone ask a million questions with an open mind than remain ignorant and uneducated on the topic," Cody wrote in another caption.

Rachael and Cody even got matching tattoos!

This tattoo is very symbolic, with each arrow representing the extra chromosomes that people with Down Syndrome have, and the shading on the inside shows the 21 bars that makeup Trisomy 21, the special chromosome that these parents are so proud of.

The girls are living a wonderful life.

They just celebrated their first birthday with unicorn decorations, cake, and lots of snuggles and kisses.

They really are the cutest babies ever.

IT seems like their cuteness only grows as they get older!

The Prescott family is real and relatable.

Through their social media, the couple shares the realities that come along with having twins with Down Syndrome. Basically, it's a lot of cute pictures and encouraging captions. Plus, I think we can all relate to sweet Nettie here with that bed head!

They want people to know that nothing can hold them back.

They really are a normal, loving family, who loves hikes, their dog, and posting a ton of pictures of their kids, just like every other Instagram parent.

It's all a journey.

Rachael has a blog where you can keep up with all the happenings in their family and watch Nettie and Lottie grow and learn.

"Inclusion means inviting people in, given their appearance, demographics, or abilities will differ from your own, and then simply living, collectively more beautiful," she wrote in an Instagram caption.

An extra chromosome is a really great thing.

Celebrate the extra love and share this article to brighten up someone's day!