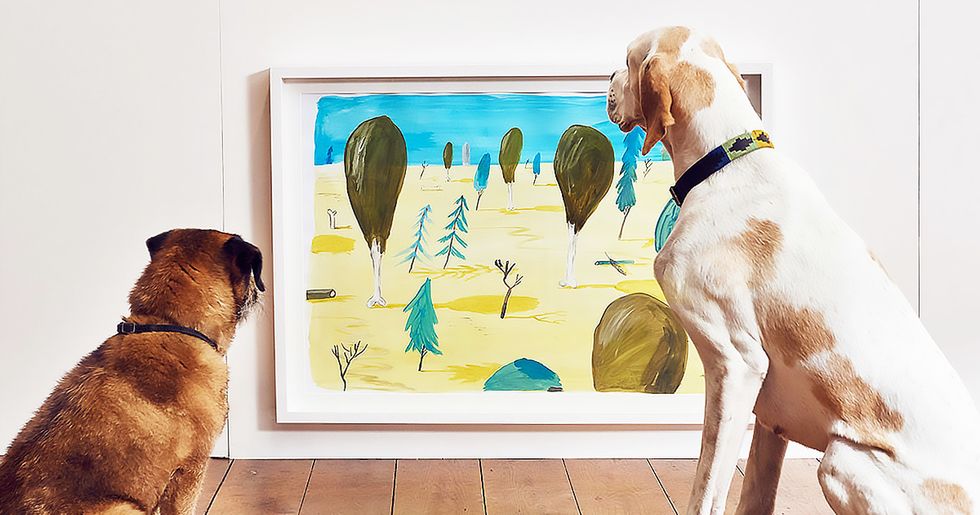 Cat cafes had their moment, but now it’s time for dogs to shine. The American Kennel Club just opened the Museum of the Dog in New York City, and it’s filled with all sorts of canine appreciation.

It’s no secret that people across the country are obsessed with their dogs. In fact, a 2017 market research report says that “more than 90% of dog owners across a wide range of demographic segments agree that their dog has a positive impact on their mental or physical health.” Hanging out with dogs really can help you feel better!

The Museum of the Dog celebrates everybody’s favorite furry friends with their one-of-a-kind collection. You’ll find classic paintings alongside interactive digital experiences — you can even find out what dog breed you most resemble. Keep reading to learn more about this woof-worthy museum.

The museum is relocating from its previous home.

It was previously located in St. Louis, but the American Kennel Club just opened the Museum of the Dog’s new home in New York City.

It was established in New York City in 1982.

Now it’s in the heart of NYC.

At the Museum of the Dog, you’ll find one of the largest collections of dog art in the world.

After all, there’s a museum for everything in New York.

Between the Museum of Sex, the Troll Museum, and the Morbid Anatomy Museum, we’re just surprised a dog museum didn’t pop up sooner in the city.

And the Museum of the Dog doesn’t just have paintings.

You’ll get to see what your pup’s ancestors looked like.

The works stretch back to the nineteenth century and even earlier.

You can find out what dog breed you most resemble.

The “Find Your Match" exhibit scans your face to discover your doggy doppelgänger.

There’s also a section devoted to dogs in pop culture.

They even have skeletons... spooky.

One skeleton in their collection is “Belgrade Joe," a Fox Terrier that died in 1888 and that experts describe as a key figure in the evolution of that breed.

Some of the art has a photograph-like quality.

It’s so realistic that the museum’s executive director, Alan Fausel, says that professional dog showers would "look at the painting as they would a show dog and they critique it that way — by the anatomy, the way it's built and so forth."

But at the same time, there’s also a lot of art to appeal to casual dog lovers.

You’ll find pre-Victorian pieces that show dogs on the attack alongside twentieth-century works that give pups a more human quality.

The museum pays tribute to Queen Victoria and her love of dogs.

Sir Edwin Landseer often painted portraits of the queen’s dogs, and it’s said her love of dog art kicked off its popularity in the nineteenth century.

There are also lots of interesting sculptures.

The staircase is lined with personal dog sculptures and trinkets that were donated to the museum.

You can see one of the art pieces from the street.

Peek through the front windows and you’ll see a giant wire dog sculpture that hangs from the rafters and lights up different colors.

It’s not all art, though.

At the museum, you’ll also get tips and advice on how to train your own dog.

You can also learn about different dog breeds.

Check out the “Meet the Breeds" kiosk, where you can learn all about the 193 known dog breeds.

You can even interact with a virtual dog.

Use the motion-detecting screen to train your virtual pup to sit, lay down, and play fetch.

There’s also an app for the museum.

The app lets you learn more about the art pieces, and there’s a scavenger hunt included for kids.

The museum also has ancient artifacts.

There’s a paw print from the Roman Empire around the second or third century AD along with an ancient dog skeleton.

There’s even an exhibit for dog collars.

After all, dog fashions change just like human fashions do, so it’s fun to see how styles have evolved.

Find out what dog houses looked like in the past.

Learn about a specific breed or dogs in general with their collection of more than 42,000 books.

Unfortunately, you can’t bring your own furry friend along.

The museum is for humans only (though service dogs are of course allowed), but they plan on occasionally hosting pups for demonstrations and educational events.

The museum’s opening is just in time for a major dog event.

February 9th marked the beginning of Westminster Week, which includes the Westminster Dog Show and other events for canine lovers.

There are big plans for the museum’s future.

Future exhibits could include deep dives into dogs in Hollywood, presidential dogs, and the biological evolution of the canine.

So what are you waiting for?!

Hurry, go fetch your tickets and book it to the Museum of the Dog. Be sure to share this story with all your dog-loving friends!