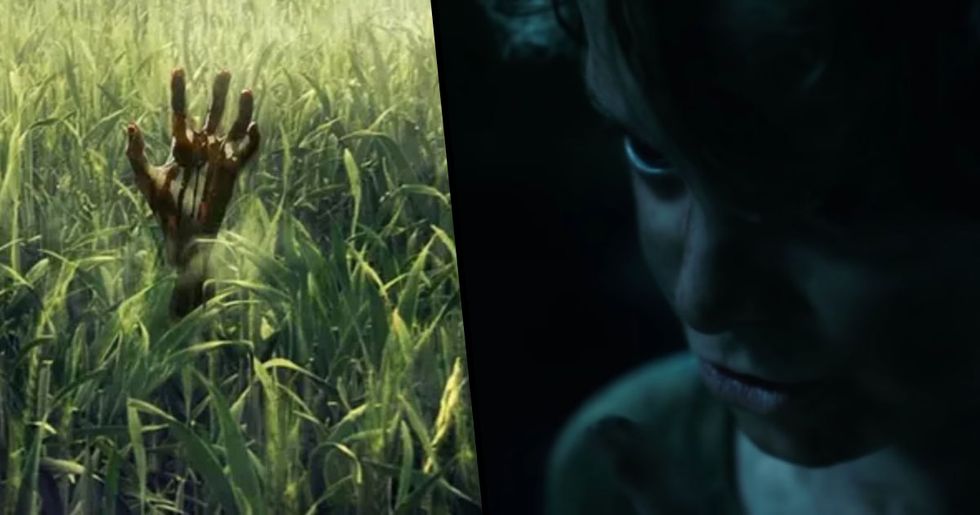 New Netflix Stephen King Horror Is 'a 10/10 Must Watch'

There's nothing quite like a horror movie to make you feel alive. Getting your heart racing, raising your blood pressure, and having you covering your eyes to avoid looking at the screen, a skillfully made horror can be a full-body experience. And, once you catch the horror bug, it can almost become an addiction. Horror fans are constantly seeking their next hit - and the more terrifying, the better.

Netflix's latest horror-themed release is one movie that been proving extremely popular with horror fans. Based on the novel by Stephen King and his son Joe Hill,  In The Tall Grass has opened to a huge reception on the streaming platform.

Keep scrolling to get all the details on the new release, as well as the strong reactions from viewers.

But first, let's look at the top 10 scariest films on Netflix right now.

This 2017 supernatural horror is based on the 2011 novel of the same name by Adam Nevill.

It follows the story of five college friends on a hiking vacation reunion.

The group reunite after a tragedy and are hoping to repair their friendship through an adventurous trip to the Swedish wilderness.

But things don't go as planned.

As you probably guessed, the relaxing and restorative trip was not to be, and, after taking a wrong turn in the woods, things start to take a terrifying turn.

This 2017 horror film is the eighth part of the Texas Chainsaw Massacre franchise, acting as a prequel (and something of an origin story) to the 1974 classic.

It follows the story of a teenage Leatherface.

The deeply disturbed, maniacal, and homicidal teen escapes from the mental institution that was holding him - and he's not alone.

He teams up with three other patients to go on a murderous rampage.

The group are vengeful and are seeking to satisfy their appetite for violence. They kidnap a young nurse and take her on the trip of nightmares while being pursued by a haunted lawman.

This 2018 movie took the internet by storm at the end of last year, even spawning a viral (and idiotic) Bird Box challenge.

It stars Sandra Bullock in a performance that received much acclaim.

Set in a dystopian universe wherein the majority of society has been wiped out by suicide, it plays into some of our darkest thoughts and fears.

A mother tries to save her two children by taking them on a terrifying journey.

And, to make matters worse, what keeps them safe is a set of blindfolds, making every feeling of fear all the more heightened.

The Cabin In The Woods

This 2012 movie cleverly blends the genres of horror and comedy.

It tells the story of a group of friends visiting a cabin.

But while they're there, their relaxing getaway goes horribly wrong, and they start to learn the secrets of this spooky location.

It's truly a horror fan's dream.

The movie uses some classic horror tropes to genius effect, producing a film in which there's truly something for every fear.

This 2014 supernatural horror is directed by Eli Roth, who has brought us many horror classics in the past.

It starts with a pretty tame premise.

A devoted father chooses to dress up as a clown to surprise his children - but soon realizes that nothing is as it seems.

The clown suit is cursed.

And, as the father realizes that nobody in his family can recognize him, the movie becomes horrifyingly dark.

It stars Daniel Kaluuya, who goes to visit his white girlfriend's parents.

But while on the trip, Kaluuya discovers that things aren't quite right - and her parents seem to have a particularly odd relationship with race.

He then discovers a truly disturbing secret.

And while there are all the conventional tropes of horror present, this movie actually goes a little deeper and makes us question what we should really be afraid of.

The pair quickly form a bond.

But while taking a trip through rural China, things start to go badly wrong when Browning becomes violently (and horrifyingly) ill.

It's soon revealed that nothing is as it seems.

And this gross-out sequence precludes something even more horrific, as the dark side of the pair's pasts are revealed.

This 2015 psychological thriller messes with the viewer's mind, making us question what is actually socially normal behavior.

It tells the story of a dinner party - with a dark side.

A man returns to his old home following the breakdown of his marriage and attends one of the most uncomfortable social interactions of all time.

The ex-couple unearth some tragic memories.

And the ex-husband begins to suspect some level of malevolence surrounding the new couple. Soon, things descend into absolute (and supremely frightening) chaos.

The 2016 follow-up to The Conjuring is even more scary than the first.

The supernatural horror tells the tale of a haunted house.

The pair are called out to help with a possessed child.

And to make it all the more scary? The movie is based on a true story. Good luck getting to sleep after this one.

This 2016 horror takes on the classic serial killer plot, but with a twist - the protagonist is completely deaf, making her feel all the more vulnerable.

She's in a remote cabin in the woods when she realizes that she's being watched.

The masked killer doesn't just want her dead, though - he wants her terrified.

The woman can't even scream for help, as she's mute - and she's surrounded by total wilderness, anyway.

But one of Netflix's most tantalizing horror releases just dropped...

In The Tall Grass, based on the novel by Stephen King and his son, Joe Hill, is a scary new horror spectacle.

It tells the story of brother and sister Cal and Becky, who hear a young boy shouting for help after becoming lost in a field of tall grass.

So, they venture into the seemingly harmless field in an attempt to rescue him.

The pair end up lost themselves and quickly realize that they are far from alone in the field - with something evil lurking within the grass.

Throughout the movie, the siblings come across other lost individuals in the creepy field...

Cut off from the normal world, the lost people are in the grips of the field as they try to find their way home.

It's a seemingly simple storyline...

With a strange Stephen King twist, and it seems to have gotten good reviews, on the whole.

After viewing, many were left shell-shocked from the spectacle.

"Ok but the movie, In The Tall Grass on Netflix... MIND F**KED ME... I'm laying in bed rn [right now] just thinking about what tf happened," wrote one viewer.

Many absolutely loved it.

Although, as far as this user was concerned, the storyline was rather twisted.

Others described the movie as "disorientating."

IN THE TALL GRASS is good, but dang if this ain't for the normies. Folks expecting a low engagement, popcorn horror… https://t.co/wfqRq1RbUK
— Drew Dietsch (@Drew Dietsch)1570196788.0

Like this user, who explained that those looking for a typical "popcorn horror flick" wouldn't be impressed.

Some were left simply confused.

As mixed reactions go, this movie really does have them all.