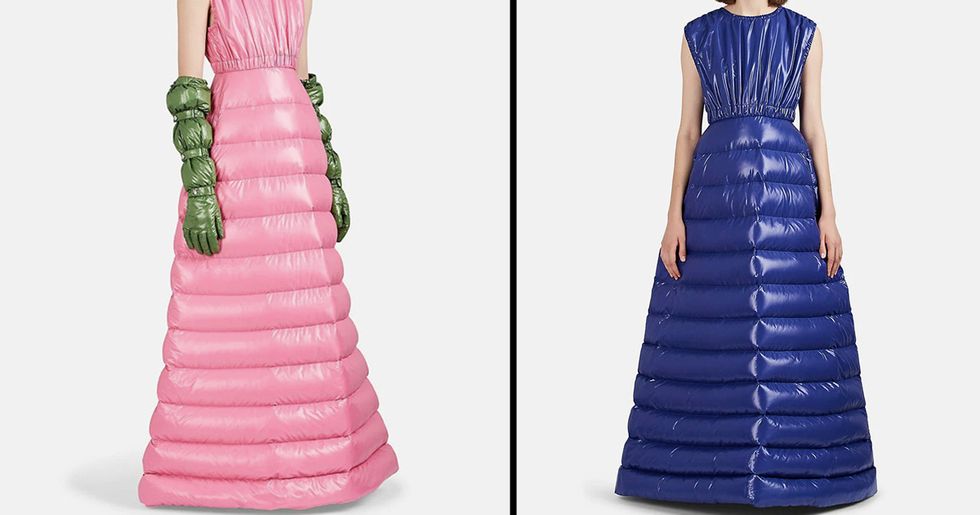 Ah the fashion world - we'll never understand it. We know that haute couture and the "wearable" art we see on catwalks isn't made for the real world, but when a design trickles down to shop level, we expect some sense of normality.

Well, if you need any evidence that the fashion world is out of touch with the common people, check out this latest offering from Italian fashion label Moncler.

Puffer jackets maybe be back in style for winter 2018, but the brand have taken the trend further than necessary with their Down-Quilted Puffer Dress.

The result of breeding a puffer jacket with a ball gown, this Frankenstein of fashion comes in hot pink...

And is available from luxury US department store Barneys.

Sleeveless with a high neckline, you can get your hands on one of these babies for just $2,710.

It also comes with pockets!

However, to complete the look you'll need the matching gloves, which cost $1500 a pair.

They're sold out at the moment though.

But seriously, why would you want to?

This extra long puffer coat is perfect for that friend who's always cold, but not so much for people who don't want to look like a pr*ck.

The description says the design is "exploring religious symbolism," apparently.

Then there is this monstrosity, known as a "puffer cape."

Still, we imagine it's pretty cosy if you ever wanted to take a nap on the tube, which is something we can get behind.

Comparisons have been made between the outfits and the massively over-sized coat Arsene Wenger wore to several Premier League matches.

As well as bouncy castles.

At least children will love you.

And the Michelin Man.

The line is actually a collaboration between Moncler and designer Pierpaolo Piccioli.

And in case you were wondering what was going through Piccioli's mind when designing these bubble chairs... I mean, dresses, the website description reads:

"Moncler Pierpaolo Piccioli, collection no. 1 of the Moncler Genius project, is the collaboration between the Italian designer's creative genius and Moncler's tailored sensibility.

"Inspired by the Madonnas of the Renaissance, this ethereal dress is created in laqué fabric with a soft down filled core.

Moncler have also extended their line of padded outerwear to include dogs.

So you and your furry friend can don matching puffer coats for walkies.

Or should we say "pupper coats."

That's right, we went there.

This walking toilet roll holder by designer Kim Tiziana Rottmuller is definitely up there.

And remember earlier this year when Gucci sent models down the catwalk carrying replicas of their own heads?

Imagine trying to walk into a bar with one of those.

At we're still not sure what this is by Pam Hogg.

This isn't the first time Moncler's clothes have caused controversy. In 2016, the brand came under fire for their racist "Minstrel Collection."

The outrage was down to the designs featuring 18th century Golliwog dolls.

But this latest collection seems to be more socially conscious, and has taken off thanks to Ezra Miller.

The Fantastic Beasts star recently wore a black version of the dress, complete with hood, cape, and gloves, at the Crimes of Grindelwald premiere in Paris.

Despite Miller's obvious satirical prowess, the actor's red carpet look was compared to everything from a caterpillar...

HE ALREADY IS A BEAUTIFUL BUTTERFLY ARE YOU BLIND.

To a Christmas Tree...

Who wore it best? Ezra, obviously.

But despite the mockery, the look is clearly catching on, with the line selling out across the board.