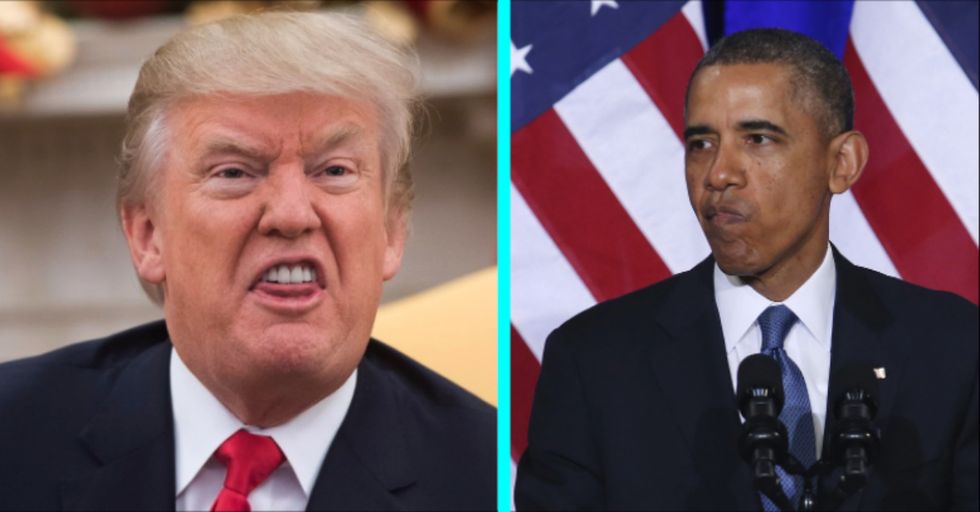 There's one thing that people on both sides of the political aisle can agree on: All politicians lie. It's an unfortunate truth, but it is the truth, and it's important to be aware of it every time you hear someone in office start to speak. Politicians are constantly playing a game of balancing their own opinions with their party's and with their constituents'. Some lies may be accidental while others are more malicious. Very few (if any) of them are ever beneficial in the long run.

According to an article from The Washington Post from November, he lies an average of 5.5 times per day. That's a lotta lies.

Last week, The New York Times published a story claiming that Trump watches between 4 and 8 hours of television each day. Trump took offense to the claim.

He called The New York Times a "failing" publication and insisted that he doesn't watch that much TV. He also wanted to make sure each of his 44.7 million Twitter followers knows that he really, really doesn't like Don Lemon. (The Times story also claimed that Donald Trump drinks a dozen Diet Cokes each day. Judging from what we already know about his eating habits, we're rather inclined to believe it.)

But just a few days prior to Trump's claim the Times is "failing," Adam Goldman (one of Times' reporters) had shared the following numbers:

In reality, The New York Times has more than 130 million monthly readers and has doubled its audience over the past two years. To put that in perspective, that's 86 times more people than Trump said attended his inauguration (one of his first false claims as president, in fact). Not exactly what we'd call "failing."

On December 14, perhaps inspired by Trump's jab at their readership, The New York Times published the following graph:

According to the interactive graph, Trump has lied 103 times during the first 10 months of his presidency. By comparison, the Times reports Obama lied 18 times — during his entire 8 years in office. The Times claims their graph only counts "demonstrably and substantially false statements." Additionally, if the same lie was told twice, they only count it as one falsehood. According to another report by the Times, Trump told a public lie or falsehood every single day for the first 40 days of his presidency.

What kind of lies are we talking about, here?

Let's review a few of Trump's lies first. Trump's first lie, according to the graph, occurred on January 21, 2017 (a.k.a. his first full day in office). "I wasn't a fan of Iraq. I didn't want to go into Iraq," Trump claimed. In reality, he was originally in support of an invasion. Then there are the lies about the inauguration attendance ("the audience was the biggest ever") and the 3-5 million illegal votes that kept him from winning the popular vote (no evidence of illegal voting exists). The most recent Trump lie on the graph is him claiming that the Democrats colluded with Russia to interfere with the election. They did not.

If we were to measure these lies in Pinnochio noses, it'd look something like this:

Really big. 'Cause there are a lot of lies. And remember, that's only counting discrete, measurably false claims since the guy took office. It doesn't count him saying he has "the best words" or that he has "one of the great memories of all time." But we know what you're thinking. What about Obama's lies?

Like we said, the graph claims Obama told 18 lies over the course of his entire presidency. Both terms!

The first lie was told on February 24, 2009, when Obama said, "We import more oil today than ever before." In reality, oil imports had peaked in 2005. He also claimed (incorrectly) that America has one of the largest Muslim populations in the world. While there are many Muslims living in America, nearly 60 countries were home to more Muslims at the time. Then there were a couple lies about the Affordable Care Act — most notably that he promised people would be able to keep their doctors. In 2010 Obama claimed the vast majority of the money he got for his campaign had been received from small donors. This was not true.

On the Pinnochio nose scale, here's where Obama lands:

Certainly larger than you'd expect a nose on a wooden puppet to be, but it doesn't have the whole nest-and-birds thing going on. Like we said, all politicians lie. But you have to admit there's a stark contrast when you actually compare the numbers.

Now, before you rush to our Facebook page with angry comments, we'll include this disclaimer:

While the New York Times' methodology appears to be sound, there are several sources that list many more lies (from both Trump and Obama). Politifact, for instance, has a giant, 4-page-long list of "All False Statements Involving Barack Obama." Trump's Politifact list is twice as long. We've looked at several similar comparisons between Trump's and Obama's lies, and every one appears to show Trump lying more often than Obama.

It should also be noted that at the time of this writing, Trump has only been president for 328 days, 23 hours, and 17 minutes.

And oh, what a very long 328 days, 23 hours, and 17 minutes it's been! All that to say, there are almost assuredly MANY MORE LIES on the horizon.

On the plus side for Trump, he can claim this as a win.

Sure, it may be the competition for the country's biggest liar, but we know how he likes to keep track of his wins. We look forward to seeing his inevitable tweets about the graph.