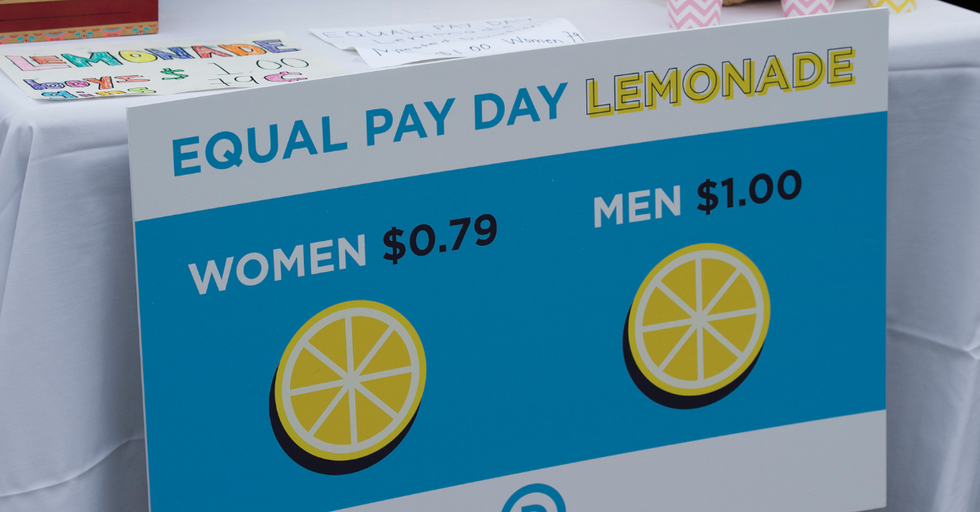 Who wants to close out 2018 with some depressing news?

As if this year (the last several, actually) haven't been totally brutal, a new report from the World Economic Forum has predicted that it will take 202 years to completely bridge the gender gap.

It's actually not a laughing matter, and it's true that things have improved. If we can take a moment to push this devastating report aside, we can admit that things are better than they were a decade ago. But if this current presidential administration has taught us anything, it's that we have a long way to go. Like, a very long way to go. It's such a long way to go that sometimes it feels like we'll never see the light at the end of the tunnel. And unfortunately, this new report just seems to highlight how far we actually have to go in order for women and men to be completely equal.

Should we start with the good news?

There has been a slight (very slight) improvement in the gender gap since last year. Gender disparity improved less than 0.1 percent. It's something, right?

The World Economic Forum (a not-for-profit organization based in Switzerland), released the Global Gender Gap Report. The report looks at several areas of equality for men and women.

Gender inequality is a global issue.

"Differences in economic opportunity, including pay between men and women, are so vast it’ll take 202 years to full… https://t.co/RQACt5pTD0
— Kelsey Trainor (@Kelsey Trainor)1545104722.0

Anna-Karin Jatfors, the regional director for UN Women, said, "What we’re seeing globally is that we don’t have any country that’s achieved gender equality, regardless of level of development, region or type of economy. Gender inequality is the reality around the world, and we’re seeing that in all aspects of women’s lives."

It's a sobering reality.

Having children lowers women’s lifetime earnings, an outcome known as the “child penalty” https://t.co/3nQuygNSpH
— The Economist (@The Economist)1544747729.0

Jatfors offered ways that governments can help move forward with equal-pay policies and investing in "parental and elder care infrastructure". Women should also have legal employment security when they're pregnant.

Which countries are in the worst shape, according to the report?

Countries in the Middle East and North Africa performed the worst. Ready for some more depressing facts?

A mere 34 percent of global managers are women.

Put women in charge! They're great!

Which country is leading the way in the battle for gender equality?

For 10 years in a row, Iceland performed the best in the report. When it comes to women's political empowerment, it ranked in first place.

Back in October, Prime Minister Katrin Jakobsdottir was one of the Icelandic women who walked out of their workplace in protest of sexual harassment and pay inequality.

New Zealand and the United Kingdom - nations that also have women in positions of leadership - came in seventh and 15th in the report.

Which countries were in the top 10 percent of highest equality scores?

Iceland, Norway, Sweden and Finland lead the way when it comes to gender equality.

According to the report, political empowerment is the area where the gender gaps are the biggest.

The United States came in 98th for that one. "Yikes" is the word I think we're all looking for here.

We've obviously got a long way to go.

It's still way too long until we reach parity.

You would think that the more evolved our world becomes, the smaller the gap would be, yes?

But according to Saadia Zahidi, the WEF's head of social and economic agendas, gender equality has taken a sort of...time out. “The overall picture is that gender equality has stalled," she said. “The future of our labour market may not be as equal as the trajectory we thought we were on."

On average across the entire world, women are paid just 63% of what men earn.

Not one country exists where women are paid as much as men. Not one!

The fact that it's 2018 and gender inequality is still happening is alarming.

And even though the internet can be a stressful place, it can also be a place of solitude for those of us who are incredibly fed up with everything.

Going to get this embroidered on a pillow for my couch.

Every woman knows this situation all too well.

It's terribly familiar. It's also whenever a woman tweets about gender inequality.

Hey - men - stop correcting women on Twitter! Nobody has time for that and guess what? Nobody cares.

The shade here is real.

If The Hunger Games was written by a man, how much do you want to bet that it wouldn't be labeled "young adult"?

Yup, that sounds about right.

Not all men think this way, obviously, but it's alarming how many do...

We live in a world that encourages toxic masculinity and social constructs that continually put down women. How can we ever rectify gender equality if we can't change this?

Every character Gillian Anderson plays gets it.

When a tweet is painful and hilarious at the same time.

In these trying times, it's important to remember the iconic lyrics to the Unbreakable Kimmy Schmidt theme song: "Females are strong as hell!" Amen.

Oh to live in a world where this can be true...

I'll have what HE'S having! (higher pay, right to make choices about my body, ability to walk down a street at night without fear...)
— Frankie Zelnick (@Frankie Zelnick)1489786769.0

Didn't they know what they were doing when they gave us kitchen windows?!

Oh, Twitter. How can a social media platform be so bad and so good at the same time?

This is...every man, ever. Raise your hand if you're over it!

The jellyfish is the most masculine creature in the sea, as it is both fragile and toxic
— Dante Allegheny (@Dante Allegheny)1490707379.0

And tell him to go home! Share this article with someone you love having heated debates with.